Gaisman, Forrest, Tom Lee and More: How to Have a Memphis Park Named After You (And What Happens If You Do) Content from the guide to life, the universe and everything 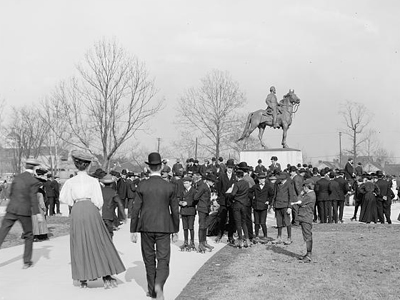 Most of us enjoy public spaces. If you live in a city, especially, you learn to appreciate parks, which provide welcome relief from heat, noise, and traffic. The trees clean the air. You can breathe, enjoy the reminder that the entire planet is not (yet) completely covered in tarmac and concrete, and watch the squirrels frolic. If you're a sociable type, you can bond with your neighbours while you enjoy observing the children and animals at play.

In your walk around a city park, you often come across puzzling artefacts: plaques, for instance, or even statuary. Signs and notices sometimes tell you that this park or this playground, ball field, piece of gym equipment, whatever, was donated in memory of a 'famous' person. Someone, pretty often, that you've never, ever heard of. Sometimes, the dedication was made because this person had done something that the neighbours appreciated. Other times, the dedicatee simply lived in the area, but later became the region's claim to fame. Finding out who these people were, and learning their stories, can be fascinating. You can also uncover old controversies and local feuds. On the other hand, some of the stories are downright inspiring.

Take Memphis, Tennessee, once the centre of a worldwide industry along the mighty Mississippi River, but after the collapse of the cotton empire, a much-reduced semi-tropical city of old-fashioned gentility, religion, apartheid, and corrupt municipal government1. In 1901, a city-wide park system was begun by landscape architect George Kessler, in which tree-lined avenues linked from green space to green space. Eventually, the park system in Memphis grew, until today, there are 167 parks overseen by the Parks and Recreation Department.

Predictably, perhaps, one of the parks was named after Jefferson Davis, the only president of the short-lived Confederacy. There's a Confederate Park, as well. Another park name might surprise you, though: in 1954, the 30-acre park along the riverfront was renamed Tom Lee Park in honour of the black Memphian who saved 32 people from drowning in a riverboat accident in 1925. African Americans had already played a part in the park system's history: millionaire African American philanthropist Robert Reed Church constructed the park that bears his name in 1899, on the corner of Beale St (yes, that's the famous jazz street) and 4th. Church did this because the parks in Memphis were segregated.

342-acre Overton Park, established in 1901, contains a zoo and an outdoor shell theatre, and is more or less overrun with free-ranging peacocks. It is also a good place for biologists to study snakes. The park is named after one of the co-founders of Memphis, John Overton (1766 - 1833), an advisor to Andrew Jackson.

You may never have heard of Henry Jacques Gaisman (1869 - 1974), but a Memphis park was named after his family – actually, the park was named after his parents, who moved from Alsace to Memphis in the 1860s. Jacques Geissmann and his wife Sarah were members of the Jewish community in Memphis. It's a guess, but Mr Geissmann may have changed his name to help people spell and pronounce it – a futile endeavour, as the park that is named after this couple is routinely pronounced, in broad Memphis dialect, Gaaaahhhhhsss-mun. Jacques Geissmann died in a yellow fever epidemic when his youngest son, Henry Jacques, was three, and the family moved to Cincinnati. It was Henry Jacques who became relatively well-known.

Although you probably haven't heard of Henry Jacques Gaisman, you are likely to have benefitted from one of his products. Henry was an inventor. In fact, his first invention was made when he was nine years old. His family was poor, and he couldn't afford an education, but in between delivering newspapers, he came up with a way to advertise on streetcars. Then, at 13, he invented those glass-enclosed bulletin boards you see in building lobbies. From there, he was unstoppable: he patented over 1,000 inventions.

His most famous invention was probably the safety razor. Gaisman's novel device was so important to the razor-blade business that Gillette merged with him, and he became the head of the Gillette Razor Corporation. Gaisman also achieved a breakthrough for abused inventors, who usually complained, justifiably, that corporations took advantage of them. When Gaisman invented a process for marking photograph negatives in the camera in 1914, the Eastman Kodak Company paid him the princely sum of $300,000. Gaisman remarked at the time that this was only fair, and would permit him to keep doing what he loved most: inventing.

Gaisman was a philanthropist, contributing to many charitable causes. One of his charities was Mt Sinai Hospital in New York. When Gaisman was there for treatment in 1948, he met a very nice nursing supervisor named Kitty. They got married in 1952. She was 33. He was 82. They had a longer married life than you might guess: Gaisman died in 1974, when he was 104.

Gaisman Park contains only eight acres of land, but it still manages to house controversy. This one concerns another not-so-famous person, and a broken promise. In 1954, a nine-year-old local boy named Ronnie Jones drowned while swimming in the nearby Wolf River with his two brothers (they were triplets). Saddened neighbours raised money for a fitting memorial: a public pool for Gaisman Park, where the children could swim in safety. Unfortunately, when the city took over the pool, there was no mention of the citizens' generosity, or the reason for the pool. People felt betrayed. Later, a monument and plaque were erected, 'To a Young Boy', with mention of Ronnie Jones, but the pool is still named Gaisman Park Pool, which rankles locally.

That header itself is controversial. Some people, such as the Sons of the Confederacy or the Daughters of Confederate Veterans, might argue that Nathan Bedford Forrest was a hero. Some people argue that William Tecumseh Sherman was a hero. Other people might call one or both of these US Civil War generals war criminals and mass murderers. Sherman, the Yankee who burned Atlanta to the ground, gets an equestrian statue in Central Park, New York City. Nathan Bedford Forrest, the former slave-trader and Confederate cavalry general who killed – many say, massacred – hundreds of fleeing prisoners at Fort Pillow, and who helped found the Ku Klux Klan, gets one in Forrest Park, Memphis2. He and his wife are also buried there.

Is this controversial? Of course it is. Even before the war, Forrest had an unsavoury reputation. He was a duelist and a knife-fighter. He made himself a millionaire by trading in plantation real estate and the lives of human beings3. When war broke out, he financed his own cavalry unit. It turned out that he had an amazing natural ability as a military commander. According to historians, he was the only enemy general Ulysses S Grant was afraid of. Sometimes, Forrest's own men were afraid of him, with good reason – he shot at least one officer in a quarrel over his orders. (It wasn't called a Confederacy for nothing.)

In 1864, Forrest defeated Union troops at Fort Pillow in Henning, Tennessee. His actions at the end of this battle are the subject of controversy. Although Forrest claimed otherwise, the Joint Committee on the Conduct of the War, a Congressional committee that met during the Civil War, concluded that the Confederates shot most of the fort's defenders – including many African American troops – after they surrendered. At least one horrified Confederate soldier wrote the same in his diary, and modern historians tend to agree.

After the war, Forrest continued to be a businessman, although times were harder with the fall in the price of cotton and the unavailability of slave labour. During a period of tension with Spain in the 1870s, Forrest wrote to WT Sherman, then head of the US Army, offering his services if it came to war. War was averted, but the man who once scorched a 100-mile swath across the South wrote Forrest a nice thank-you note, saying that it would have been an honour to have served with him.

There are Memphians who aren't particularly happy about a park honouring Nathan Bedford Forrest. Unfortunately for this sentiment, the park was added to the National Register of Historic Places in 2009, which made it more difficult for the city to consider either renaming the park or moving the bodies.

The city wanted to get rid of the statue of Nathan Bedford Forrest, as well as one of Jefferson Davis. Unfortunately, this was against Tennessee state law. So they allowed the formation of a nonprofit organisation called Greenspace, and transferred ownership of the park to them. The statues were removed, to the joy of some and the annoyance of others. In 2019, the statues were acquired by the Sons of Confederate Veterans, on condition that the statues be put up somewhere other than Memphis, or anywhere in Shelby County.

The statues were destined for the new (2020) $6m Confederate Museum in Columbia, Tennessee, although the museum's director publicly expressed reservations at becoming 'a monument graveyard.'

Memphis has 167 parks, and they're named to commemorate all sorts of people and events. In addition to the ones named, there is Martyrs' Park, for the yellow fever victims, Spanish War Memorial Park, East End Park, where they used to perform vaudeville, Mud Island River Park (yes, it's on Mud Island, in the Mississippi), and Chickasaw Heritage Park, which probably boasts the oldest structures, since it's built on two burial mounds from the Mississippian Culture. There are many others, even an Audubon Park. Lots to choose from.

If you'd like to know more about the parks and their stories, visit the Historic Memphis Parks website.

Or pick a park – any park – in your city. Go for a walk. Take a camera. Read the inscriptions. Ask questions. You might stumble upon an amazing tale or two. You might even start a controversy – or end one. Just remember to feed the squirrels.

Photo supplied by the Library of Congress
1An idea of this government could be gleaned from the fact that the most influential political figure in Memphis in the first half of the 20th Century was known as 'Boss' Crump.2We are talking here about the equestrian statue in Forrest Park in Memphis, Tennessee. We are not talking about the even more controversial equestrian statue outside Nashville. That statue was erected by a man named Kershaw. You might care to read an article about this gentleman and his project. In December 2021 this statue was removed following the death of its owner, at the insistence of the executor of his will. The event was celebrated on social media by opponents of Confederate-themed statuary and art lovers, one of whom remarked that 'statues shouldn't have teeth.'3An h2g2 Researcher has commented that Forrest was 'one of the one percent'.