A 19th-Century View of Fever Content from the guide to life, the universe and everything 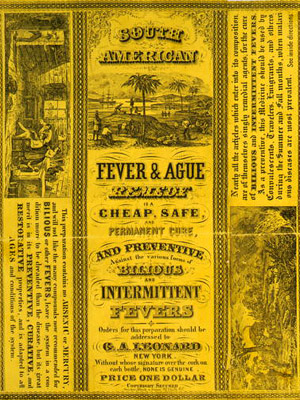 In the 19th Century the term fever was used to classify a group of diseases, much as the term 'cancer' is used today.

Fever [Fr. fievre]: A disease characterized by an accelerated pulse, with increase of heat, impaired functions, diminished strength and often with preternatural thirst. Heat; agitational excitement by anything that strongly affects the passions
–  A Popular and Complete English Dictionary - edited by the Rev John Boag - London - 1848

During the 19th Century fever was one of the major causes of death. It was estimated that one out of every six people would die of fever. Many prominent physicians and scientists devoted much time and effort to understand the causes of fever, trying to find ways to prevent its spread, or finding a cure. Perhaps one of the best examples of the impact of fever in the 19th Century is expressed in the popular Irish ballad:

She died of a fever, And no one could save her, And that was the end of sweet Molly Malone. Now her ghost wheels her barrow, Through streets broad and narrow, Crying, 'Cockles and mussels, alive, alive, oh!'

Much of the information in this Entry is based on a magazine article Malaria, Produced by Vegetable and Animal Putrefaction, as a Cause of Fever written by Dr Usher Parsons MD, and published in the The Naval Magazine in January and March 1836.

The great variety of symptoms, causes and prognosis make a modern search for a generic definition of fever diseases almost impossible. Specific searches for Yellow fever, Scarlet fever and Malaria will produce many results.

In the 19th Century fevers were defined as an inflammation of one or more of the organs, these included both skin and blood. Symptoms usually included elevated temperature, shivering and a quickened pulse, and lethargy was also commonly observed. This is a general rule, but may not always appear. The experienced physician could recognise a fever from experience. The specific fever present may not have been determined until several stages had passed. 'Fever of Unknown Origin' was a common cause of death; it is still used occasionally today, particularly at the start of what we now call the AIDS epidemic.

It was not until the early years of the 20th Century that a medical team under Dr Walter Reed linked the spread of Yellow fever to a certain type of mosquito. Before that time the accepted theory was that fever was caused by gases produced by rotting vegetation. The name 'Malaria' comes from the Italian words 'Mal' meaning 'bad' and 'Aria' - translating as 'air' - literally 'Bad Air' was used to describe gases produced by both animal and vegetable corruption. Gases formed from vegetation alone were referred to as 'Miasma'. The word Malaria is used today for specific fevers; they are serious relapsing infections caused by protozoa of the genus Plasmodium, which are transmitted by the bite of the Anopheles mosquito.

Several diseases and conditions were all classified, by some, as types of fever; intermittent fever, remittent fever, nervous fever, dysentery, cholera, neuralgia and some forms of tic douloureux. Fevers were generally classified into several groups by their effects.

Victims of intermittent fevers suffer intervals of high fever and return to a normal condition for several days until the symptoms reoccur. The fever commonly called Malaria today falls into this classification.

In this type, the level of fever will fluctuate but will never reach a normal temperature. This classification was further divided into simple and malignant. Yellow fever falls into the malignant type.

Several conditions that affect various parts of the body; hay fever and arthritis are in this category. They are no longer considered a true fever.

This type of fever, known today as epidemic typhus, includes hospital, gaol or ship fever. We now know it is spread by infected lice.

This is a milder form of typhus. Today it is associated with a rodent flea.

Conditions Where Fever is Prevalent

Fever was found in almost every inhabited part of the world. Its occurrence was affected by temperature, terrain and elevation. Fever was rarely seen when the temperature dropped below 40°F (4°C). As the temperature rises the frequency and severity of fever increases until it reaches a plateau at about 100°F (38°C). People living near deserts were almost exempt from most fevers.

Fever was most prevalent in marshy areas where there was an abundance of decaying vegetation. It was observed that fever was fairly rare in forested wilderness areas, but cases increased dramatically when trees were felled and fields ploughed1.

A good example of the effect of elevation is Rome, Italy, where fever was common; in nearby Tivoli some 300 feet higher in elevation, cases of fever were rare. This same phenomenon could be seen in many areas of the world.

How is Fever Spread?

It was believed that the fever gases were carried by breezes and currents of air, not all obvious or understood. In some cases a home that appeared to lie in an exposed position would be free of fever, while another house far removed would be stricken severely. The upper floors were less prone to fever than the ground floor. It was also believed that as the air cooled at nightfall, the increased moisture increased the potency of the gases. This is why people were cautioned to avoid the 'night air' and many 19th Century beds were surrounded by curtains.

There was no simple cure for the 19th-Century physician; fever might be moderated, gradually reduced to a mild and safe condition. The methods and treatments were dependent on the condition of the patient and the symptoms observed. The first order of treatment was to order rest and prevent any distractions, then a purgative medication would be given to help the body remove the 'evil humours'. Should the fever increase, the inflammation of the organs must be relieved. The accepted method was to bleed the patient to relieve the pressure on the vascular system. The amount of blood drawn was at the discretion of the doctor in attendance; too much could hazard the welfare of the patient, too little might not stem the inflammation. In extreme cases a stimulant such as wine or brandy would be imbibed2 to help balance the vascular system.

In her book Notes on Nursing published in 1860 Florence Nightingale opposed the common idea that sick rooms should be closed to fresh air:

The only time when it can be unsafe to open the window at night is when the air is more foul without than within. This may be the case in close back courts, and in malarial countries, or at hours when there is a sudden fall of temperature. But even in malarial districts it is found that thin gauze curtains3, while admitting the air, are a protection from Malaria. Always air your room, then, from the outside air, if possible, Windows are made to open; doors are made to shut...

What is the Truth?

Today we understand that diseases are caused by microscopic germs, viruses and bacteria, and are spread by insects and contact. Modern conclusions are based on electronic microscopes and an understanding of cytology4. This concept was unknown to our forebears so they made their conclusions by their own observations which were quite different than those understood today.

Today many fevers are prevented by infant inoculations, and others are almost eliminated by environmental measures such as mosquito control. Sentinel chickens are placed in areas prone to certain mosquito-borne diseases, West Nile Virus, Equine Encephalitis and others; their blood is checked regularly for any signs of infection. If any positive tests come back from the laboratory, public warnings are issued to the area and eradication procedures are increased.

1The clearing of land also created better breeding conditions for mosquitoes.2By the patient!3Perhaps the first insect screen?4The study of cells.