Florence Nightingale (1820-1910) Content from the guide to life, the universe and everything 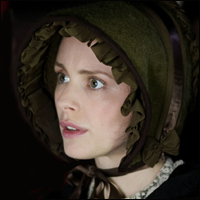 Long-remembered as the Lady of the Lamp, a ministering angel whose nursing skills saved the lives of hundreds of soldiers during the Crimean War, Florence Nightingale was named after her birthplace, Florence, in Italy on 12 May, 1820. Her parents were the well-to-do and well-educated William E and Frances Nightingale, who owned two large properties; Lea Hurst in Derbyshire and Embley Park1 in Hampshire. Frances gave birth to Florence while on a two-year European tour-cum-honeymoon.

The young Florence was a highly intelligent child. Her father educated her at home, teaching her Latin, Greek, French, Italian, history and mathematics.

While an incredibly bright student, Florence also possessed a rebellious streak and felt stifled by the restrictions imposed on Victorian women of her class. Victorian society expected women to pass their time in such genteel activities as sketching, reading and holding polite conversation. In her autobiography, Florence wrote:

When night comes, women suffer physically the accumulation of nervous energy... it makes them feel every night when they go to bed as if they are going mad.

Her mother was quite shocked at Florence's attitude and once said:

We are a breed of wild ducks who have hatched a wild swan.

Florence claimed that she experienced her 'calling' in 1837 while walking in her garden at Embley Park - a message from God beckoning her to do His work. Her parents were aghast that Florence should do such a demeaning job as nursing. It was not the career path expected of such a sophisticated and well-educated Victorian lady! However, in the 1850s, Florence's sister Parthenope2 experienced a nervous breakdown, and William relented in his decision. So, in 1851, Florence went to Kaiserwerth, in Germany, for three months training to be a nurse. Two years later, she became superintendent of a hospital for gentlewomen in Harley Street.

Florence's decision to carve a career for herself in nursing was not an easy one, as it involved considerable personal sacrifice.

Richard Monkton Milnes, one of London's most eligible bachelors, courted Florence for some seven years, but she consistently declined his proposals of marriage. After his third proposal, although attracted to him, Florence decided that she would still have to refuse, even though at this stage she was 31 years old. In her private notes, Florence commented on her 'torment' at this decision, and how she 'wasn't sure she'd done the right thing'. The historian Jehanne Wake believes that Monkton Milnes was bisexual, while Florence's biographer, Mark Bostridge, in Florence Nightingale: The Making of an Icon (Penguin, 2002) notes that Monkton Milnes had an interest in erotica and pornography, and was one of the earliest collectors in Britain of the works of the Marquis de Sade.

Another theory suggests that Florence herself was a lesbian and that she was in love with her beautiful cousin Marianne Nicholson3. Martha Vicinus, editor of Florence's letters, believes that Florence had a definite attraction to women, although she notes:

In the 19th Century there was not a clear-cut division in desire, and it was acceptable to be warmly attached to other women, but not too warmly.

Bostridge, in his biography of Florence, broadly agrees with this, noting that, in those days, female friendships were more intense than nowadays and that 'whatever longings she may have felt, she made a stark choice to abandon any personal intimacy to pursue her ambitions'.

The causes of the Crimean War lay in Russia's desire to take advantage of the weakness of Turkey to win access to the Mediterranean through the occupation of Constantinople. In July 1853, the Russians invaded the Ottoman provinces of Moldavia and Walachia at the mouth of the Danube (modern Romania). On 4 October, Turkey declared war on Russia. Britain and France joined forces with Turkey in order to limit the potential expansion of Russia towards the Mediterranean.

Britain assumed, quite wrongly, that the campaign would be short and, therefore, failed to send adequate medical supplies. When troops began to be struck down by cholera, newspaper reports were scathing and accused the authorities of incompetence. In an effort to win back public opinion, the government unveiled measures designed to improve hospital facilities in the field. Seeing her opportunity, Florence Nightingale persuaded her friend, the Minister of War Sidney Herbert, to send her to investigate.

Florence arrived in Constantinople on 4 November 1854, together with a band of 38 other nurses. Although her stated assignment was to care for soldiers in Scutari Barrack Hospital, some 300 miles from the Crimea, her arrival was greeted with suspicion by the medical authorities as nobody had informed them of her visit. Florence's quarters were overrun by rats and the corpse of a Russian officer lay rotting on the floor. However, within a few days of her arrival hundreds of casualties from the Battle of Inkerman arrived and Florence and her nurses found themselves working around the clock.

Determined to take charge of the situation, Florence wrote letters to Sidney Herbert, naming those individuals she believed were incompetent. She also took more direct action and dismissed a band of Irish nuns who had been drafted in to help her.

Conditions in the hospital were appalling. Thousands of sick and wounded soldiers lay on mattresses along four miles of corridors, with barely enough room for the doctors and nurses to walk between them.

In her efforts to improve the situation, and being a proponent of the then dominant 'miasma theory' of disease'4, Florence insisted on the utmost cleanliness.

In an effort to address this situation, and following an emergency debate and the defeat of the standing British government, the new Prime Minister, Lord Palmerston, sent out a Special Commission of public health experts to examine the site. What they discovered shocked the nation and Florence. The hospital, that had originally been built by the Turks as a barracks, had been built over a cesspit. Thus the patients had been unwittingly drinking their own sewage, accounting, at least in part, for the incidence of mortality. Having made this discovery, the commissioners were able to implement procedures to deal with the problems of vermin, overcrowding and ventilation.

At the end of the Crimean War, in 1856, Florence returned home full of anger at the conditions the soldiers had had to endure. She appealed to Lord Palmerston to launch an investigation into the health of the Army. She was convinced that her report would expose the incompetence of the military. However, she was totally unprepared for the finding that it was the poor hygiene in her hospital that had been responsible for the exceptionally high death rate.

Following her return from the Crimean War hospitals in 1856, Florence suffered several bouts of illness. She, and her friends and medical personnel, thought she was dying. She suffered her first major attack in August 1857 and from then until 1880 she was a virtual invalid, spending much of her waking hours confined to a couch. An attack at Christmas 1861 left her unable to walk and she remained bedridden for six years.

The nature of the illness that afflicted this previously highly dedicated and energetic woman has never been really understood. Some people considered it was malingering while others attributed it to her sense of guilt at her failure to recognise the link between the deaths at Scutari and the environment. Other people thought that her symptoms, which included weakness, headaches, nausea at the sight of food, breathlessness, tachycardia and palpitations, were indicative of her having had a stress-related nervous breakdown.

Some commentators believed Florence's symptoms were more indicative of an organic illness. Thus, when she arrived back in England in August 1856, her family and friends were dismayed at her gaunt appearance and at a marked change in her personality. She was gloomy, agitated, and obsessive. To some medical people this dreadful change suggested that she may have contracted a serious and debilitating chronic disease in the course of her service in the east. Among her symptoms she complained of severe spinal pain, which was almost certainly due to spondylitis5 - said to be one of the most incapacitating and painful maladies that can afflict humankind. This has led some medical commentators to believe that her symptoms were due to her having contracted a form of chronic brucellosis6 the most common complication of which is spondylitis, while on a visit from Scutari to Balaclava in July 1855.

Despite her illness and perhaps driven by her sense of guilt, Florence devoted the rest of her life to improving public health and sanitation, during which she ushered in an impressive range of reforms.

In interpreting the data she obtained during her time at Scutari, Florence made extensive use of statistical analysis and pioneered the visual presentation of information on statistical diagrams. Early on she used pie charts, which had first been developed by William Playfair in 1801, and later on she used 'polar area diagrams', which are equivalent to the modern 'circular histogram' or 'rose diagrams'. In recognition of her work on statistical analysis applied to health and sanitation, the Royal Statistical Society elected Florence Nightingale their first female member in 1859.

In 1861, Florence established the Nightingale Training School for Nurses at St Thomas' Hospital, London and is now regarded as the founder of modern nursing. During the course of her career she wrote 200 reports, books and pamphlets. She involved herself in the formation of the International Red Cross and received the Royal Red Cross from Queen Victoria in 1883. In 1907, at the age of 87 she was awarded the Order of Merit, being the first woman to receive it.

1Which is now a school.2Parthenope is the name of a Greek area in Naples, her birthplace.3This idea appears to have been based solely on the disappearance of letters she sent to her cousin!4The miasma theory' held that diseases such as cholera or the Black Death were caused by a miasma (Greek: 'pollution'), or 'bad air'. Later on, this concept was gradually superseded by the more scientifically founded 'germ theory' of disease. 5Spondylitis is an inflammatory disorder of unknown cause that primarily affects the axial skeleton, peripheral joint and extra articular structures.6Normally a disease of cattle, brucellosis is a highly contagious zoonosis caused by ingestion of unsterilised milk or meat from infected animals. In humans, it is also known as 'undulant fever' or 'Malta fever'.