There's a Rubber Duck in My Monument: Dalton Trumbo's Statue Content from the guide to life, the universe and everything 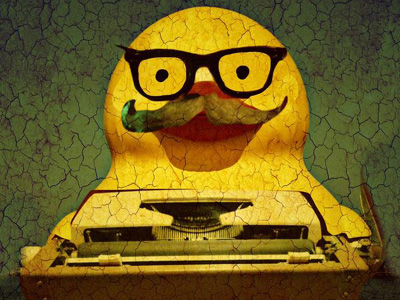 Grand Junction, Colorado, 2012 population 59,899 (estimated), boasts an unusual piece of public art. In front of the Avalon Theatre on Main Street is a bronze statue of a bespectacled man. He is a famous writer, this man. And he's writing – while sitting in a bathtub. His name is Dalton Trumbo.

Why is Dalton Trumbo the subject of public art in the town where he lived as a kid? Well, obviously, because he grew up and became famous. But what is he doing in a bathtub? Ah, there's a story behind that. You'll probably want to stick around for it.

Bathtubs figure prominently in one of the more casual forms of North American outdoor art –   bathtub Madonnas. Also known as 'Mary on the Half Shell', these religious shrines feature a 'grotto' constructed of an upended, half-buried bathtub sheltering an image of the Blessèd Virgin. Bathtub Madonnas began appearing in the 1950s (apparently because this was when the devout first had old bathtubs to repurpose) and are especially popular along the Mississippi River, wherever there is a large Roman Catholic population. The use of a discarded bathtub to create a grotto is picturesque, practical, and completely understandable. The Virgin is not bathing in the porcelain. The tub merely provides shelter from the rain and snow.

Bust portraits with amorphous bases have occasionally excited the risibility of the philistine critic. One such in Bonn, Germany, has been dubbed 'Beethoven in der Badewanne1', while the Washington, DC, statuary group dedicated to some leading feminist pioneers has been derisively called 'Three Ladies in a Bathtub'. But these statues do not have an intentional bathing connection. It's just the viewer's imagination working overtime.

Then there's Archimedes. A statue featuring the great mathematician in the bath is only logical: Archimedes is world-famous for his 'Eureka!' moment. The Manchester statue has something else to recommend it – the inventive Greek looks about ready to leap out of the tub, to go try out his brilliant idea. Nudity in statuary is rather common, but almost nudity is an interesting idea. Score one for the sculptor.

There's a good reason for Archimedes to have statues that feature him in the tub, with or without rubber duck. But Dalton Trumbo? Trumbo is mainly known as a novelist, screenwriter and blacklisted Communist. So why is he in a bathtub? It turns out there's a good answer. Trumbo's favourite place to work was the tub. According to his family, he'd spend all day in there, writing and smoking and drinking coffee. (Writers have the oddest rituals – it seems to be a state-based craft.) So now we know why he was in the bathtub, but why did Grand Junction's citizens put him on Main Street that way? Is there a story behind that? Yes, of course there is.

Trumbo (1905-1976) grew up in Grand Junction, back when it had a smaller population of around 10,000 in 1926. The Great Depression hit the town hard, and made for economic struggles in Trumbo's own family. He worked in a bakery, learned a lot about humanity and poverty, studied part time, and practiced his writing. Finally, in 1935, Trumbo published his first novel, Eclipse. It was successful, but it didn't make him popular in his hometown. You see, a lot of leading citizens recognised themselves in his portrait of fallible small-town humanity – and they didn't like what they saw.

Fortunately by this time Trumbo was living in California.

Trumbo went on to win fame – with his award-winning 1939 anti-war novel Johnny Got His Gun, with his pre-blacklist screenplays Kitty Foyle, Thirty Seconds Over Tokyo and Our Vines Have Tender Grapes, and in his post-blacklist days for scripting Spartacus and Exodus. His output was amazing, and his dogged determination helped end the Hollywood blacklist in the early 1960s.

Grand Junction eventually forgave Trumbo – or at least, the generation who had been satirised in Eclipse died out, and the kids were curious. As Trumbo's 100th birth anniversary approached, the local friends of the library had an idea: why not bring back the novel their grandparents wouldn't let them read? Alas, it was out of print – but never mind, the Trumbo family would help. And they did, generously giving the library the copyright and helping out with an introduction by daughter Nikola. The reprint has been a hit, raising quite a lot of money for the public library. (You can buy it online if you've a mind to help them out.)

The friends of the library must have been chuffed with their success, but they were having too much fun to quit. That's when they got the idea of memorialising their favourite prodigal son with a piece of statuary to be placed in front of the historic2 Avalon Theatre on Main Street. They raised $45,000 in donations and commissioned the statue. So that's the story.

But why is he in the bathtub?

Oh, you want a better explanation than, 'everybody knew he liked to write in the bathtub.' Well, in 1969, Mitzi Trumbo, Dalton's 23-year-old daughter, took this photo of her dad in the tub. (Mitzi became a famous photographer.) The picture sort of sums up this eccentric but influential writer, so they turned it into this chuckle-worthy statue. It's not as reverent as a bathtub Madonna – there's even a bronze rubber duckie in there. But then, Trumbo was a Communist, so how dignified is one required to get?

It gets cold in Colorado. But then, a kindly neighbour will probably lend the writer a scarf.

The 2015 film imaginatively titled Trumbo stars Bryan Cranston as Trumbo, and tells more about the crusade against the blacklist.

A Dalton Trumbo filmography can be found at the IMDb.

1Beethoven in the Bathtub.2It's historic to Grand Junction. Don't quibble.