What3words: How to Be Found on Earth, or Finally, an Electronic Thumb Content from the guide to life, the universe and everything 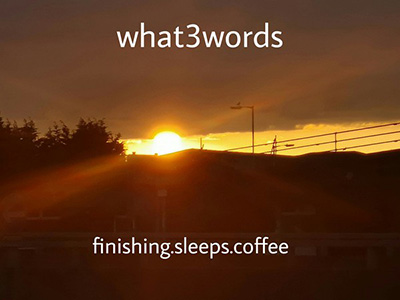 Note: E·lec·tron·ic thumb: an imaginary device for signalling passing spaceships with the view to a ride, as described in The Hitchhiker's Guide to the Galaxy by Douglas Adams.

Prologue: In 1794, the city council of French-occupied Cologne gave local government 48 hours to inventory all the houses in the city. As a result, the houses were numbered in a continuous system without regard to the street they were on. If you have 4711 cologne on your vanity table, you're looking at the result. Today, the building where this eau de cologne was first produced is at Glockengasse 4, which is a lot easier to find.

This entry is about a method of geolocation that is somewhat less mindbogglingly confusing than the one that plagued postmen in French-occupied Cologne.

There's no there there.
- Gertrude Stein, talking about Oakland, California (start at type.vines.pays)

There are lots of ways to find places on Earth. Millions of maps, street guides, google directions, GPS, etc. In a pinch, you can ask a policeman or a kindly-looking stranger. They may or may not know. You can navigate by street, but what if there are no streets? Or use compass directions, if you have a compass and know how to compensate for shifting magnetic poles. Sometimes, though, you just get lost. Or, you know where you are, but you can't give good directions. This could create a problem for you and others. What if you were waiting for hot pizza? Or life-saving medicine? What this world needs is a sure-fire way to let other people know where you are. Or, as a computer programmer would no doubt say, what the world needs is an app.

It's got one: what3words. What3words is a universal address system of startling simplicity. According to its inventors, what3words 'takes complex GPS coordinates and converts them into unique 3 word addresses.' This enables anyone, anywhere, to locate a three-metre-square spot on the planet using three words. Three words are a lot easier to memorise than co-ordinates of latitude and longitude, and a lot less prone to transcription errors.

How did Chris Sheldrick and Mohan Ganesalingam, what3words founders, get the idea for a worldwide address system so phenomenally useful that it has been adopted by the Mongolian postal system? Music venues. Sheldrick, a concert organiser, got tired of musicians showing up at the wrong venue. So what3words was started on 5 March, 2013. It's a simple idea that is now being used by organisations and businesses around the world (and by you, too, if you like).

Go to this online map. Type in an address. The app will give you the three-word address for a three-metre-square spot on the planetary grid. You can give the three words to a participating party, who can look it up in reverse on their app. The app can be accessed online or downloaded for offline use. (The algorithm is held in a package 20MB in size, so you can download it to a smartphone.)

Don't like the address you got? Well, is your structure bigger than three-by-three metres? Just move the cursor around the grid. You might find a square closer to the back door that you like the sound of better. The squares are intentionally diverse in wording: in order to make the addressing less liable to confusion, things that are close to each other don't have similar names. That way, if a pizza delivery driver sees that beast.valley.free is in Kent, UK, and he's in Philadelphia, he'll recheck and find out he wants to go to Elfreth's Alley at best.valley.free. The museum workers will get their Vegetarian Surprise, and he won't get lost on Market Street.

In addition to the Mongolian post office, users include:

For the what3words team, one of the great advantages of the system is its ability to give addresses to places in developing countries and other areas without regular street addresses. Emergency services can find hard-to-identify areas. Humanitarian aid can get to the right places. People who live far away from 'civilisation' can still do their banking and be connected to the world. They say, 'what3words is useful where street addresses don’t exist and provides a level of specificity when they are not accurate enough.'

Critics are annoyed that this tool is owned by a private company. While individuals can use the app for free, companies have to pay for the services. This, they feel, is unfair. Also, why isn't this potentially private information in the hands of governments, as it should be? For a lengthy discussion of why Atlantic.com feels that this technology is problematic, see the article they described as 'The most interesting story about postal addresses you have ever read'. (The Edited Guide hopes to offer a less lengthy alternative here.)

Other critics generally have commented that the very precision of the what3words algorithm makes them nervous. They're worried that they will be found when they do not wish to be found. It could be argued that this is equally true of GPS coordinates, and that the solution is simply to keep one's address to oneself. A homeowner caught in a California mudslide with only a mobile phone with a low battery may be glad for the opportunity to shout out 'secreted.ballots.biology' to the rescue workers.

People who worry that 'they' know where they live should also avoid using the Internet on a mobile and be advised that no matter what steps they take to remove adware, they may find that their computers' IP addresses are traceable. We feel there is nothing any of us can do against the ubiquity of satellites, and their disturbingly improving accuracy.

Consumers in Western Europe and North America may demur that this system is unnecessary. After all, their street address is more familiar to them than three unrelated words. Why should they bother to memorise something new? This is a valid point for the developed world. But where there are no street names – or, possibly, even streets – this system could save a life, or enable social and economic progress.

In order to help people, we first have to find them. This is true in emergency scenarios – a family trapped by an earthquake, a collapsed music lover at a crowded concert, or a pregnant woman in difficulty in a remote area. It's just as true when providing long-term support and development – safe drinking water for poor communities or health and vaccination records for children in unofficial settlements.

What is the first thing you do when you get a new phone directory, if you still receive such an archaic item? You look yourself up, of course. Try this with the what3words app. Memorise your address. Share it around to appear cool and in-the-know.

Now go and look up your favourite places. Or famous places. Here's a brief list of interesting ones:

How Many Words Does It Take to Describe a Planet?