Common Buzzards Content from the guide to life, the universe and everything 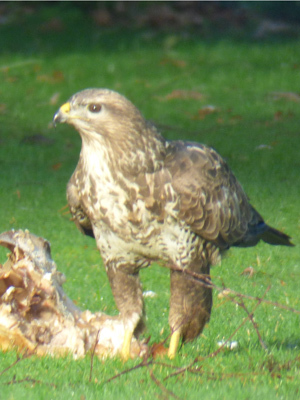 The Common Buzzard (Buteo buteo) is a bird of prey that can be seen across Europe and in parts of Asia and Africa. Some members of the species stay close to where they hatched, such as in the UK, while others migrate long distances from the steppes of Russia to the grasslands of South Africa.

These large birds have plumage in various shades of brown that enable them to be camouflaged in trees or even on wooden posts so that they can swoop down on prey and take them by surprise. There is considerable variation in the plumage of Common Buzzards - some may be predominantly pale creamy brown while others may be very dark brown. Even if you don't see them perching, or hovering overhead, you may hear their distinctive 'peeeuu' call when they are nearby. They eat a range of creatures, from insects to rabbits. They will even take lizards and young birds. They also eat carrion, including cooked meats such as chicken or turkey.

Female Common Buzzards are larger than the males. They nest in trees and lay up to three eggs over a period of a week. Both parents spend time incubating but the male fetches most of the food while the female stays with the eggs for most of the time. The eggs hatch after about a month, and the chicks can fly at about the age of 50 days. They are fed by their parents for at least some of the time until they are about three months old. The oldest Common Buzzard known to the Royal Society for the Protection of Birds (RSPB) was 28 years old.

The Common Buzzard is the most common raptor in the UK. However, its population has been under threat at various times. The myxomatosis epidemic in rabbits in the 1950s caused a decline in the numbers of Common Buzzards in the UK because of the huge reduction in the amount of available prey. The birds have also been persecuted at times, with many falling victim to poisoning. They are also vulnerable to being poisoned by pesticides eaten by their prey. However, in the 21st Century they are classed as Least Concern on the International Union for Conservation of Nature’s Red List as their numbers have recovered in the UK and populations elsewhere in the world are stable.

Common Buzzards are not to be confused with turkey vultures (Cathartes aura) that are known as buzzards in the USA. Common Buzzards are related to birds called hawks in North America, such as Ridgway's Hawk (Buteo ridgwayi) and the Red-Tailed Hawk (Buteo jamaicensis). They are also related to the (slightly larger and paler) Rough-Legged Buzzard (Buteo lagopus) but are not in the same genus as the (paler, slimmer-headed) Honey Buzzard (Pernis apivorus).