'Horrible Histories' - the Television Series Content from the guide to life, the universe and everything 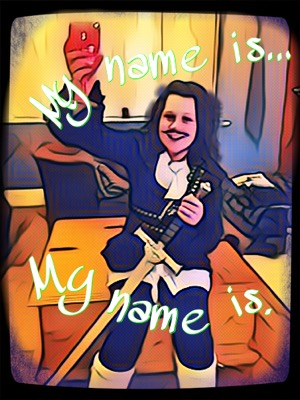 Gory, ghastly, mean and cruel,
Stuff they don't teach you at school,
The past is no longer a mystery,
Hope you enjoy 'Horrible Histories'
- Theme song lyrics.

Horrible Histories is a BBC children's comedy television series that perfectly encapsulates the mission statement that the BBC has held since 1922, to Inform, Educate and Entertain. Inspired by the popular book series by Terry Deary, Horrible Histories (2009-2013, 2015+) is aimed at an audience aged six to adult. The series consists of 30-minute episodes featuring a number of sketches set within historical settings, focusing on genuinely amusing, gruesome, gory and gross historical facts.

Horrible Histories combines the tone of classic comedies such as Monty Python and Blackadder and adds a large degree of toilet humour. Yet even toilet humour can be highly informative and instructs children about the various uses that wee and poo have been put to over the years, including for fuel, leather tanning, hair dye, explosives, dentistry and making walls, to name but a few.

The show is so popular that it boasts that over 50% of British 6-12 year olds have watched at least one episode.

Hi, I'm a Shouty Man and I'm here to talk to you about 'Horrible Histories'...

Horrible Histories was made by Lion TV for the BBC following Richard Bradley's son's obsession with the books. Bradley realised that the children who had grown up with the books when they were first published were now old enough to have children of their own. He collaborated with highly experienced comedy producer/director team Dominic Brigstocke and Caroline Norris, who were able to assemble a highly-talented team of established comedy writers and actors to make what they aimed to be a show made to the highest of standards. The format chosen was that of a sketch show with each era introduced by animated figures inspired by the book series' illustrations, and links between sketches provided by a puppet of a talking rat called Rattus Rattus, who would reassure viewers that the facts shown were, in his words, '100% accu-rat'. The main actors starring in the show, which was broadcast from 2009, were Mathew Baynton, Simon Farnaby, Martha Howe-Douglas, Jim Howick, Ben Willbond and Sarah Hadland – but not for long as Sarah Hadland left to become one of the main characters in Miranda1, although she would return as a guest star.

Horrible Histories was nominated and won lots of awards. The 'Born 2 Rule' song proved incredibly popular, and for series two writer Laurence Rickard joined the cast as one of the main actors, largely because none of the main cast could master saying his wordy reports frequently punctuated with the words 'but not for long!' in the same way he could. The series also featured David Baddiel telling spooky and scary stories – or were they?

A Christmas Special all about Christmas was made at the end of series two in December 2010 as a gift for the nation, followed by a quick trip to the Royal Albert Hall in July 2011. For series three, four and five the show continued using the highly-successful format, with increasingly original material rather than sketches inspired by parts of Terry Deary's original books and occasional special episodes which tied in with Halloween and Valentine's Day. There was even an adult adaptation which showed the same sketches, except hosted by Stephen Fry instead of puppet Rattus Rattus, in order to appeal to a more grown-up audience. Location filming took place at the Chiltern Open Air Museum, which convincingly doubled for everything from the Iron Age to 1950s America. By the end of series five it was felt that, after five full series, in July 2013 the Horrible Histories television series had come to a natural end. A song encompassing all the historical periods covered made for a spectacular grand finale for what was the very last episode of Horrible Histories ever.

But not for long!

Of course, as Horrible Histories is such a special television show, in 2014 the BBC announced that they would show new Horrible Histories specials. Sadly the original main cast were a bit busy; they had enjoyed working together so much that they were making their own adult comedy series, Yonderland (2013-16), for Sky, as well as film Bill (2015) about William Shakespeare for the BBC. And so in 2015 a new cast was cast, with special guest stars appearing in series six for one episode each. This success led to more specials and another full series in 2017.

The sketches have two main focuses. The first is British history from the Stone Age onwards. The second is classical antiquity, covering the ancient Egyptians, Greeks and Romans. There are occasional sketches set elsewhere around the world, but these are a noticeable minority. Of course there is a large degree of overlap; the Stone Age, for example, was a worldwide phenomenon, and the Potty Pioneers featured could be from anywhere. Initially for the first five series, rather than focus on a particular era, each episode would jump from era to era seemingly at random. Series six and episodes called the 'Specials' each focused on a specific era, although by series seven the series again encompassed different eras, but each episode had a linking theme such as artists and explorers.

The series can be legitimately criticised for being very Anglo-centric, concentrating on English historical figures more than Scottish (Shocking Scotland) and Welsh and ignoring much of the rest of the world. However the series did make a point of emphasising the role of Czech and Polish pilots in the Battle of Britain in the 'RAF Song' and championing Mary Seacole, a Jamaican woman who became a heroic Crimean nurse, as well as Rosa Parks.

The classical eras are:

The main recurring character is Cleopatra.

King Phillip II of Spain is a recurring character, portrayed as an evil, scheming man.

Other sketches cross over the boundaries of historical eras. An incredible highlight of the series is the Grim Reaper, who hosts the Stupid Deaths. Characters audition for a place in the Afterlife with only those who died in the most amusing way allowed through. As Death sings about these deaths: 'they're funny 'cos they're true'. In series six, where each episode focuses on a historical figure's life, Death hosts his own chat show, Chatty Deaths; at the end of the episode he enjoys a short interview with that person.

Many sketches are based on other television (often BBC) series. For example, food from different eras is examined in 'Ready Steady Feast' or 'Historical Masterchef'. Different ways of life are contrasted in 'Historical Wife Swap' and major events are reported in HHTV News, described as The News at When. This often features a character called Bob Hale summarising long, drawn out events such as the Wars of the Roses or the Crusades in an incredibly quick manner.

Each episode contains a historically-set song. For instance, they may tell the story of a famous historical individual sung by someone in character, such as a famous king. These are a real highlight of the show and encompass a wide range of musical styles. For example, the 'Blackbeard' song would not seem out of place in Gilbert and Sullivan's Pirates of Penzance, Adam Ant's 'Stand and Deliver' influenced 'Dick Turpin Highwayman' while The Bee Gees' 'Stayin' Alive' is spoofed in a song about Aztec human sacrifices titled 'Ain't Stayin' Alive'. Similarly musical Oliver!'s 'Food Glorious Food' is the basis of the Victorian Work Song, 'Work Terrible Work'. Even The Wurzels are parodied, as is the number of explorers from Devon, with 'I've Got a Brand New Land to Find' inspired by '(I've Got a Brand New) Combine Harvester', a song which itself was a spoof of Melanie's song 'Brand New Key', whose chorus is: 'I got a brand new pair of roller-skates2, You got a brand new key'3.

In fact, the songs were so good that in 2011 they were performed in a special Horrible Histories   prom at the Royal Albert Hall. This, which they described as a Royal Variety Performance with a difference as it included a variety of royals4 performing, was part of the BBC's aim to encourage children to enjoy classical music, and so the songs were interspersed with pieces of classical music, which gave the performers time to change costumes.

The series was inspired by the book series by Terry Deary, which started in 1993 with the publication of The Terrible Tudors and The Awesome Egyptians. The series continued with 21 other books on different historical eras, each book gaining in popularity until the fifth book, Blitzed Brits, which coincided with the 50th anniversary of VE Day, reached number one on the bestseller list. This cementing the series' popularity and the books have led to numerous specials, handbooks, spin-offs, annuals, a magazine series, audio books and even a brief American cartoon series in 2001 about a couple of American children who time travel a lot.

Deary's aims for his books were to inspire children to learn about history by focusing on making it fascinating and fun, concentrating on the bits that schools have traditionally edited out. The series has been incredibly popular, with Terry Deary voted the fifth-most popular living children's author in 2005. Since the late 1990s the series has annually been the most-borrowed non-fiction children's books from libraries.

In recent years Deary has courted controversy, stating that schools teaching children over the age of 11 should be abolished and that 12-year-olds should go to work instead. In 2013 he announced that he believes that all libraries should be closed, largely because though his books are incredibly popular in them, his royalties are capped at £6,000 for books borrowed from libraries. If everyone who has borrowed one of his books from the library had bought it instead, he would be much richer. He is quoted in the Guardian as saying:

1A 2009-15 television sitcom created by Miranda Hart, written by Miranda Hart and starring Miranda Hart.2Horrible Histories informs us that roller-skates were invented by John Joseph Merlin in 1759, although near-tragically he failed to also invent roller-skate brakes.3No wonder Melanie Anna Safka-Schekeryk's ('Melanie') other hit is titled 'What Have They Done to My Song, Ma'.4Singing monarch characters included Cleopatra, Richard III, Henry VIII, Charles II, George I, George II, George III and George IV, with Queen Victoria in the audience.