Charles Stuart Courting at the Court of Spain Content from the guide to life, the universe and everything

The Stewarts:
The Life of Mary Stuart, Queen of Scots
James VI of Scotland inherits the English Throne | The Children of James I
George Villiers - Duke of Buckingham | Charles Stuart Courting at the Court of Spain 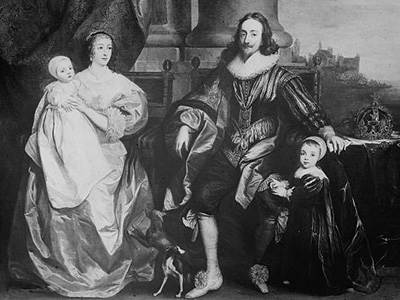 In the year 1614, Charles, Prince of Wales, Earl of Chester and heir to the three kingdoms of England, Scotland and Ireland, was close to his 14th birthday on 19 November, and approaching the first stage of adulthood. As was the custom of the age this allowed the commencement of marriage negotiations. His choice of wife would have important consequences for England's political alliances for years to come.

The age of consent for men in England at the time was achieved in two stages. At the age of 14 a boy achieved the first legal stage of adulthood, known as the age of discretion. The age of discretion was recognised under Canon Law as the point where with age of innocence ended and the individual reached the first stage of adulthood with moral responsibility for his actions. From this age the penalty of excommunication could be imposed.

Full adulthood was reached at the age of 21 years, and brought with it all the duties and privileges of his class established by law. These thresholds were to set the timetable royal for marriage plans.

A Proposal From Spain

As Charles approached his 14th birthday it was the appropriate time for Don Diego Sarmiento de Acuña, 1st Count of Gondomar, and the Spanish ambassador to England, to propose the marriage between Prince Charles and Infanta Maria Anna, the daughter of Philip III of Spain. In accordance with tradition, Charles, Prince of Wales, Earl of Chester and heir to the three kingdoms of England, Scotland, and Ireland, became the subject of intense marriage negotiations between England and Spain.

At the time this proposal was very unpopular with England's Protestant Parliament. Parliament believed the Spanish had commenced the marriage negotiations purely as an attempt to keep the British out of Spain's growing empire. A marriage would make the English an ally of Spain and would threaten to put an end to any English competition in the New World. As Charles had just reached the age of discretion and there was no cause to decide in haste, James decided to let things settle down and simply postponed the decision.

A Spanish Marriage Negotiation That Failed

In 1621 as Charles approached the age of 21, pressure increased for Charles to find a wife and secure the succession. His father King James decided the best plan was to revive the Spanish proposal of 1614. The Howards and other English Catholic ministers and diplomats enthusiastically supported the proposal. In Spain too a marriage between Charles and the Infanta was considered a good political move, as the Spanish were hoping to prevent England supporting Protestant uprisings in Europe1.

James seemed keen on the match and had ordered the arrest of national hero Sir Walter Raleigh on 29 October, 1618. Raleigh was duly arrested upon his return to England after a failed attempt to raid the Spanish treasure fleet as James wished to preserve the fragile peace between England and Spain in preparation for the match. Raleigh was tried and executed, and public opinion at the time was that he had been sacrificed to appease the Spanish. The fact is Raleigh's execution had settled another diplomatic dispute with Spain and Ambassador Gondomar helped James prevent further hostility. Another important supporter of the union was Pope Gregorio XV, as he hoped it might help bring the English church back into the Catholic fold.

When Philip III of Spain died on 31 March, 1621, preparations for the match ground to a halt, as it was unclear if the new king, Philip IV, was prepared to continue with his father's plan to unite the royal houses. In 1622 Charles, keen to pursue the marriage, proposed that he and George Villiers, 1st Duke of Buckingham might go to Spain and visit the Royal Court and sweep the Infanta off her feet. James agreed for two main reasons. Not only was it an attractive way to maintain peace with Spain and avoid a costly war but also because a wedding dowry would give him personal funds that were not under control of Parliament. This would afford him more political freedom.

On 18 February, 1623, Charles and George, accompanied by a suitable entourage, set out for Spain. This plan had serious flaws as Charles and George were both young males away from home for the first time, with almost unlimited cash. They travelled discreetly by way of France using the travelling names of John and Thomas Smith. This was an appropriate way to travel as the Protestant Charles could hardly be seen to go publicly courting a Roman Catholic princess. If this became known it would cause public protest in England, although James was unconcerned as his mother was Catholic. As they approached their destination a messenger was sent in advance of the party to warn of their arrival. Charles and George arrived almost unannounced in Madrid on 7 March. They went straight to the residence of Sir John Digby, 1st Earl of Bristol and England's Ambassador to Spain. The arrival of Charles and his party was a surprise to both Sir John and King Philip of Spain.

When Lord Bristol was informed of the purpose of the mission he must have had some misgivings. While Charles, a dignified young man, behaved as befits a prince of the realm, George, despite being newly married, was a different matter. Later events were to prove that he was attempting to cover a young man's nature with a thin veneer of gentility.

Perhaps due to advice given by Lord Bristol on 16 March, Charles in the company of a small retinue soon attended the palace and paid his compliments to the new King of Spain. He explained the purpose of his visit and presented the royal family with lavish gifts. Charles made an excellent impression with everyone at the Spanish court - except the Spanish princess.

Charles was aware the conditions were unacceptable but to avoid the stigma of failure it appears he decided to allow his father James and Parliament to make the final decision. Charles concluded his part of the negotiations, requested formal agreement to King Philip's proposals from the King and Parliament, and settled down in Spain to await the official decision from England. Both King James and the Parliament were furious with the Spanish proposals and further discussions were delayed due to the death of Pope Gregorio.

Negotiations were brought to an abrupt end when, after a violent argument, a drunken Sir Edmund Verney punched a priest2. After this insult to the Catholic church the English party were requested to leave Spain.

A Visit To France

Charles chose to travel home via France and revisit the French court. He now wanted to open marriage negotiations for the Princess Henrietta Maria, the daughter of King Louis XIII of France. Charles had seen Princess Henrietta for the first time in Paris during his outward journey to Spain, when she had been presented to him at a French court entertainment. The initial discussions regarding the marriage of Charles and Henrietta Maria were successful. There were, as always, details and conditions that had to be agreed, but the initial discussions were successfully concluded.

There is an interesting story to be found in the memoirs of Madame de Motteville. She talked with Queen Henrietta Maria after she set up the Royalist court in exile at St-Germain-en-Laye near Paris during the English Civil War. She states that the Queen told her that while Charles was at the Spanish court, one of Henrietta Maria's older sisters3 privately met Charles. The pair spent some time in conversation, during which she encouraged Charles to marry her sister. This conversation may have provided a motive to visit the French court on the journey home and is thought to have influenced his choice of wife.

The party returned home to a jubilant welcome and James concluded the matter by declaring war on Spain. Parliament, however, would not forget that Charles Stuart had a leaning toward Rome and had married a Catholic princess.

By 1624 James was growing infirm and his control of affairs of state and Parliament were nominal. As a result Charles assumed control of the kingdom in the name of the king. James I of England and VI of Scotland passed away on 27 March, 1625. Henrietta Maria and King Charles I married on 13 June, 1625.

1Such as the French Wars of Religion (1562–98), the Eighty Years' War (1568–1648) and the Thirty Years' War (1618–48).2Verney was an ardent Protestant intent on denying a Catholic priest access to a dying Englishman, possibly to prevent the administration of the last rites.3Possibly Christine Marie, who later married the Duke of Savoy.