The Darwin Awards Content from the guide to life, the universe and everything 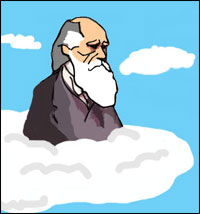 Awards, awards, awards. There is an award or prize for everything. There are awards for the best: the Oscars for the movie world, the Olympic medals for the best sportsmen and sportswomen, the Nobel Prizes to celebrate achievements in science and arts. There are prizes for the worst - Worst Dressed Person prizes, for instance. There are even awards for the improbable and unusual - for example, the IgNobel Prize for achievements that cannot or should not be reproduced.

The Darwin Awards firmly belong in the last category.

What are the Darwin Awards?

Charles Darwin got his claim to fame for his 'survival of the fittest' theory, which describes the force of nature 'selecting' species by allowing the fittest to survive and the weaker ones to die.

It is thus only proper to have an award named after Darwin, that honours the men and women who have contributed to the improvement of the human species and the human gene pool by removing themselves from it in various stupid ways.

How did the Darwin Awards First Come About?

In 1993, Wendy 'Darwin' Northcutt of Stanford University began collecting stories from newspapers about people meeting their demise in various silly ways. Having verified their legitimacy, she compiled them into articles, which were then circulated among a circle of friends. Of course, as good stories go, these escaped the confines of the circle and reached other people, many of whom soon began sending in nominations of their own. Eventually, the Stanford server became overloaded, forcing Ms Northcutt to move the material to the Darwin Awards - and thus, the Darwin Awards were officially born.

Any good campaign must have a good motto! In the case of the Darwin Awards, these come aplenty from faithful - and hilariously creative - readers (the best ones are collected and printed on T-shirts that you can buy at the Darwin Awards site). The funniest ones include:

What Constitutes a Darwin Award?

The Darwin Award is not some low-class, tasteless award that turns real tragedy into jokes and insults those who have met their death prematurely. These awards are all about making an example of those who did really, really stupid things and consequently got themselves killed - probably in the hopes that the public will learn from these mistakes and avoid it themselves.

Thus, the primary prerequisite for a Darwin nominee is stupidity. Getting killed because you grew tomatoes on an electric fence you built yourself, and then tried picking them, deserves a Darwin. Death caused by a drunk driver is not a Darwin candidate - it is a tragedy. Fatally bad (or absence of) common sense and judgment are what really makes an ideal Darwin candidate.

The five crucial criteria for the selection of Darwin Awards winners are:

A person who manages to sire offspring before he removes his genes for incompetence from the human gene pool, or one who manages to survive his stupidity, is of no use to human evolution. Therefore, a Darwin Awards candidate must be dead - or at least incapable of breeding - as with the case of the man who gave himself a lobster vasectomy.

Not only must a Darwin nominee be an example of fatal stupidity, his very act of removing himself from the gene pool must also be a source of entertainment. Getting oneself killed by bringing an electrical appliance into the bathtub may be asinine - but who is going to laugh? According to Northcutt:

The fatal act must be of such idiotic magnitude that we shake our heads and thank our lucky stars that our descendants won't have to deal with, or Heaven forbid, breed with descendants of the fool that set that hare-brained scheme in motion.

This covers fatal acts displaying a serious lack of judgment in the most ridiculous of ways - say, playing Russian Roulette with lit firecrackers in one's mouth. Copycat-ing is therefore a serious no-no.

A Darwin nominee must die by his own hand as a consequence of his own stupidity. Dying as a result of trying to force a hand grenade open with a circular saw is a definite qualifier. Sawing the branch you are standing on is another. And those who deliberately aim for a Darwin - and die in consequence - are prime candidates.

Dying by someone else's hand, however, no matter how silly, is pure bad luck - or murder. Except in one particular classic Darwin case where a guy had a disagreement with his son over who'd taken the chocolate cake icing - and actually provoked his son into stabbing him...

To qualify as a Darwin nominee, a person must demonstrate that he is capable of sound judgment and responsible decisions. That rules out children who get electrocuted by wet electrical appliances and mentally unsound people who cannot understand the ramifications of their actions.

Because many have argued that the ability to rationalise and make responsible decisions are taught to children by their parents, those who are under the age of 16 are therefore not eligible for a Darwin; however, there are nominees whose actions are considered foolhardy by even their peers.

The most important qualifier for any recipient or candidate of an award is legitimacy - that is to say, the nominee's achievement or actions can be verified. Valid sources include articles from reliable newspapers, television reports and reliable eyewitness accounts. Without these, a story is just an entertaining urban legend - which is incidentally what half these Darwin stories end up as.

There is never enough room at the top for winners of any awards. The creators of the Darwin Awards, however, have been accommodating enough to create several levels of honour.

The ultimate honour for those who have extinguished themselves in stupid ways. One particularly deserving recipient of the Darwin Awards was an Iraqi terrorist who did not put enough postage on a letter bomb, got it back (returned to sender)... and then made the mistake of opening it.

These are usually the ones who do not make the grade - people who do not quite manage to get themselves killed, but deserve a mention anyway for their incredible effort and creativity. A machinist who attempted to satisfy himself against the canvas drive-belt of a large floor-based piece of running machinery (but then had a delicate... appendage caught between the pulley wheel and the drive belt) survived the episode, but was awarded an Honourable Mention nevertheless.

Obviously these people do not deserve a Darwin - they have lived to tell the tale. However, their colourful stories of close shaves are celebrated nevertheless - like the tale of the guy who used the wrong type of lighter fluid on his new barbecue lighter, set both his hand and the laundry basket on fire - and then tried to put out the flames with water.

For every Darwin winner there are several hundred apocryphal stories of people who made 'Herculean' Darwinian efforts. It is hoped that no such people exist in real life.

Finally, there are the stories that have been submitted by readers and approved by moderators, but still await Darwin's review. This is where all the potentials go before they are graded or awarded prizes. A favourite for this year's Honourable Mention is the tale of a felony drug-using probationer who tried to pass other people's urine as his own for a urine test by duct-taping a container of urine to his appendage. Alas for him, he had incredible difficulty removing the tape after his arrest...

Should we be Laughing?

There are obviously those who think that the Darwin Awards are in bad taste - that people simply have no right to laugh at death because it is tragic, that these dead people at least deserve a certain degree of respect. The Darwin Awards people have also been getting flamed by certain groups of people - namely those who feel that stories concerning children or the disabled are no laughing matter, and those who scoff at stories of near misses and sterility.

But the Darwin Awards is not about disrespectfully poking fun at the dead or making a circus act of it. The awards are about people who are possessed of perfectly sound minds and sound judgment but who nevertheless go against their common sense by doing irresponsibly stupid things - acts that tickle our funny bone and entertain us with their twists and turns of creativity while at the same time educating us about the laws of common sense and the hazards of performing common sense-defying hare-brained acts, and thus warning us not to follow their footsteps lest we ourselves earn a Darwin.

I Want to Know More About These Population Control Volunteers!

You Mean Those People Actually did all That?

Yes. Just head over to the Darwin Awards website - or get yourself one of the two Darwin Awards books (Unnatural Selection and Evolution in Action).

Some people get their 15 minutes of fame when they inadvertently kill themselves doing ludicrously illogical things. Some others were just famous all along - which serves to show us that fame and brilliant accomplishment are no insurance against fatal stupidity.