A Material Culture of Journalism: From Poking Clay to Poking Pixels Content from the guide to life, the universe and everything 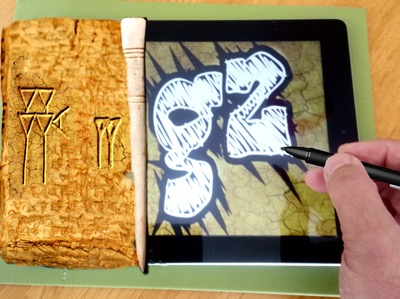 Is the print medium dead? Some say yes, some say no, some say maybe. But newspapers   – what the Greeks call efimerides because they're, well, ephemeral – are alive and well and kicking on your computer. They have their own apps. It might be worth a few pixels of computer space to reflect on humanity's journey to get to the pinnacle of journalism that is the h2g2 Post, not to mention the Edited Guide. It's all about material culture and the history of writing on things.

Obviously, you can scratch your message on a rock, but they're kind of hard to tote around. Archaeologists tell us the earliest portable writing was likely to be on clay tablets. To leave a message on a clay tablet, you made little marks in the soft clay with a sharp stick called a stylus. Then you let the clay harden. This was like hitting 'Save', only slower. The code you used was called cuneiform rather than HTML.

Cuneiform was used to record all manner of ephemera: business records, political doings, horoscopes, laws, maps, religious rants, letters, and even recipes. In other words, pretty much everything you'd find on the Internet, at a hand-held size.

Clay tablet writing was popular in the Middle East and Mesopotamian region for about 3,000 years. It was a pretty durable technology. You could have made money in clay tablet shares.

Read a tablet on the Internet: Would you like to cook Mesopotamian Wildfowl Pie? The ancient recipe is but a mouseclick away. You'll need to scrounge up some tulip bulbs, though. Yum!

Not everybody was surrounded by clay. Along the Nile River in Egypt, however, there were lots of reeds. One variety, papyrus, could be turned into a writing surface. At least, if you were patient enough. You needed a hammer, a rolling pin, water, some cloth, and a press. You also needed time: all told, it took a few weeks to produce papyrus for writing or drawing on.

Papyrus was useful stuff. All manner of things got written on it: news, letters, bills, complaints about bills, maps, religious stuff, etc. Like clay tablets, papyrus did fairly well in a dry climate, and Western civilisation was born in dry climates. Alas, papyrus doesn't keep very well. It gets brittle and crumbles into pieces, which leads to frustrated papyrologists' putting together jigsaw puzzles. 'Hey, I think this fragment says, "See Spot r..." Anybody got an "... un"?'

To have a lasting effect, the newspaper needed more durable material. But before we go on, you might want to watch a papyrus-making demonstration by a modern Egyptian vendor who is quick to warn you off that after-market sugar cane substitute, which is way inferior.

Many Sheep Died for Your Bible

For human-centric reasons, the introduction of parchment was considered a step forward in the history of publishing. But parchment is made of sheepskin or goat hide, and vellum of calfskin. Parchment is more durable than papyrus, making it a good material for things you want to keep around, like Bibles. But the sacrifice involved – animal skin instead of plant fibre – gives a whole new meaning to 'Behold the Lamb of God'1. And it was way too expensive for newspapers. People saved it for fancy manuscripts. This limited literacy rather a lot.

The Latin word for parchment is pergamentum. This word came from the Greek city of Pergamon, near the Aegean coast of what is now Turkey. Ancient writers, such as Pliny the Elder, claimed that parchment was invented there, but this is doubtful, and Pliny definitely didn't have three sources behind that story. Be that as it may, parchment was used from at least as far back as the 5th Century BCE down to the 15th Century CE, when the printing press was invented – and even beyond. You may even have a piece of parchment in your home, if you happen to have graduated from a university that took the term 'sheepskin' literally when it came to diploma making. Education is murder.

If you have the stomach for it, watch this BBC video about parchment making. Literacy is not for the faint of heart.

I'd Rather Have a Paper Doll to Call My Own

Even before the printing press, there was paper. The Chinese invented it in 105 CE. The knowledge spread slowly: by the 8th Century CE, the Islamic world had it. By the 11th, even the slower Europeans caught on. Paper was cheaper than parchment or vellum, because it represented a return to a more easily renewable resource. Paper can be made of anything you can turn into pulp: rags, wood, plant fibre. Paper can be made of linen or hemp – in fact, up until the end of the 19th Century, US schoolbooks were largely made of hemp paper. Then someone outlawed the plant, and forests were killed for education and pulp fiction.

Because paper was cheaper and easier to make, it helped fuel the growth of literacy in Europe and the Americas. Because paper manufacturers can embed watermarks in their products, it is possible for palaeographers and print historians to identify the sources of the paper. This makes work for otherwise unemployable academics, and helps us understand the advance of learning. Paper made books cheaper, helped spread sedition and revolt, and led to the birth of modern democracy. One of the greatest tools of social change, the daily newspaper, would have been unthinkable without the invention of paper. Paper was cheap and disposable. Today's revolutionary utterances wrapped tomorrow's fish catch.

Would you like to engage in an eco-friendly historical exercise? Use this instructional video to make real paper from maize.

Paper reigned from 1440 CE to sometime around 2000 CE. At this point, however, millions of humans had a tool at their disposal which would make paper, if not completely obsolete, at least a lot less necessary: the computer. Virtual paper doesn't eat up forests. Pixels are actually cheaper, once you get over the start-up cost, which involves inventing the computer and getting it down to the size of something less than a city block. Once you've got something that will sit on a desktop or, preferably, your lap or even better, your hand, you're in business, and you don't need paper any more.

Clay tablets required skills with a poking stick. Papyrus and parchment required pen, ink, and good penmanship. Paper bridged the gap between handwriting and printing, with the unwieldy typewriter thrown in for good measure. Virtual paper requires only a keyboard or keypad. With it, the journalist of today can inform readers about everything from the scandals of pyramid building to the latest robot activities on Mars. But wait! It is also possible for you, today's eager journalist, to write or draw on this e-paper without using that cumbersome keyboard. You only have to purchase, and master the use of, a high-tech gadget that allows you to make any mark you want on the virtual page... a sort of electronic poking stick... what shall we call it? A stylus, that's it.

Oh, how far we have come in a few short millennia! Now, be sure and read the h2g2 Post. No livestock were injured in its production.