Printing a Newspaper in the 20th Century Content from the guide to life, the universe and everything 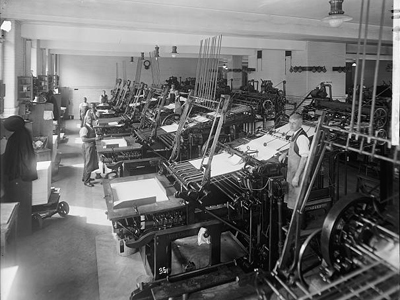 In the early days, books were copied by hand, each word reproduced from the source text. This process was so labour intensive that the copies became treasured heirlooms and were preserved for centuries.

With Johannes Gutenberg's invention of movable type and his printing press, the written word became available to the general population. The first books published were also rare and costly and printed with the intention of being handed down from generation to generation.

In the early 1600s a new age of printing was introduced – the broadsheet newspaper. Printed on only one side of a large sheet of paper they contained the news and items of interest for the day and were intended to be disposed of after they had been read. This evolved into the daily newspaper and would become a part of everyday life in the 20th Century.

In the early days of printing, each line of text was placed by hand into a 'galley', a small metal channel that was the exact width of the actual column to be printed. The galleys could then be placed into a 'chase' that was the size of the final page. When the editor was satisfied that all was correct and any errors removed, they would print as many pages as the editor thought might be needed. The chase for the next page would then be placed into the press and the next page printed. When the last chase available was filled and placed into the press the type from the first one would have to be removed and returned to the sorting tray. For a small rural newspaper with a few dozen subscribers and weekly or bi-weekly editions this method still works well.

With the development of the Linotype machines in about 1886, the process of setting type was simplified, but it was still time consuming, especially when the wrong key was pressed. The Linotype is similar to a standard typewriter, but instead of printing words on paper, it turns molten lead into galleys of type and places them in a tray, ready for printing.

Today, modern processes have made it possible to set 'type' on a computer and print a plate that can be acid etched and placed into a position on the printing press.

A Day in the Newsroom

In the 20th Century, a large urban newspaper usually published two editions a day. One, the Morning edition, would be set and printed overnight and ready for delivery before the readers woke up and got out of bed in the morning. The type for the Evening edition would be set during the day so it could be printed and released as the readers were leaving their work. Most papers today have eliminated their evening edition to cut costs.

The process begins with the reporters gathering their stories and writing them down. This means not only putting the words on paper, but writing the most important items at the top of the article, working down in descending order of importance. The final paragraphs can be deleted with little harm to the story if the space is needed for other more important articles or for other items.

It is always necessary to fill all the pages with print – a blank rectangle of newsprint is as unwanted as 'dead air' in the broadcast media. A good editor will keep 'fluff' stories with no immediate importance, but interesting bits about local history, recipes, poems and other such items. Just before 'press time' the Editor-in-Chief will decide what to keep and what to cut, carefully measuring each 'Column Inch'1 of text, graphic and, most important of all, the paid advertising.

The editors then review the stories and mark any corrections, either returning them to the reporter for correction or passing them to the type room. A 'galley proof' – a long narrow slip of paper containing only the text – may be printed for correction. Sometimes a full page 'galley' might be printed that also includes any illustrations and the other stories. When all the editors are satisfied that the proofs are correct, the Editor-in-Chief will order the paper to be put to bed!

The paper's bed is not a soft down mattress with a warm comforter, it is a cold, hard, flat surface where sheets of paper can be laid down and printed upon. Even though almost all modern newspapers use rotary offset presses, the term remains. As soon as the word is given, the press room becomes a hotbed of activity – miles of paper fly through the presses. When the last page has been assembled the presses are stopped and prepared for the next edition. As each new chase of type is approved it is placed into the proper press, replacing the one from the earlier edition. 'The 'Lifestyle' and other sections that are not 'time sensitive' are changed first, those with on-going events like sports are saved until all of the expected events are completed and their stories approved. There are usually two sections devoted to on-going news, one for national and world events (containing the front page), and another for local news. Under normal circumstances these will be the last chases to be placed into the presses.

If an important event occurred between the regular editions of the paper, an 'Extra' edition would be published. This is the subject of another Entry.

Now, in the 21st Century, publishing a newspaper is no longer a profitable enterprise. Current events are readily available on both the Internet and 24-hour cable news networks. These sites are updated almost instantly and often contain live footage of the event. However there are still many who enjoy the feel of a large section of paper in their hands. Many papers still survive by using innovative practices and supplementing their income from other sources, such as printing coupons and flyers.

Image courtesy of Library of Congress
1Or whatever unit of length measurement the editor is comfortable using.