Extra - Extra! Read All About It! Content from the guide to life, the universe and everything 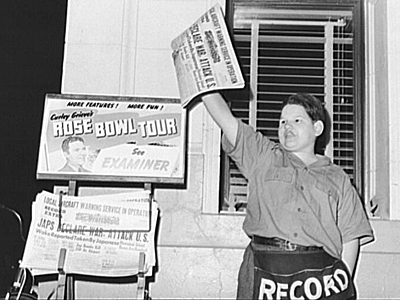 In the days before the Internet and 24-hour cable news, all the news came from printed pages. In many films from the mid-20th Century an important event is introduced by showing a group of shabbily-dressed boys running into the street shouting 'Extra – Extra – Read all about it!' while waving newspapers over their heads. The event was often revealed by a close-up of the front page of the paper.

Chief: I Have a Scoop!

A large urban newspaper in the 20th Century usually published two editions a day. One, the Morning edition, would be set into the presses and printed overnight, ready for delivery before the readers woke up and got out of bed in the morning. The type for the Evening edition would be set during the day so it could be printed and released as the readers were leaving their work. Most papers today have eliminated their Evening edition to cut costs.

Sometimes an important event happened1 in the middle of the day. In cities with several newspapers there was a competition to see who could release the new story first. Even in markets with only a single paper, profits would be higher if you could sell three newspapers to each customer rather than only two on a single day.

The best scoop2 of all was a story that the other papers did not even know about. If the Editor-in-Chief thought the story important enough, he would rush it through the process and get the Front Page revised as quickly as possible. They will print an 'Extra', unscheduled edition!

The publication of a newspaper is a long and tedious process. Today we can just pull up our text, make a few revisions, and hit the 'send to printer' button. At a major newspaper this process takes several hours, and involves dozens of workers. To publish an 'Extra edition' between scheduled printings was a major decision.

If the next edition had already begun to print, it was important to stop the now obsolete pages from being printed. If the new story was important enough for the front page to be revised, or even completely replaced, any further printing would waste both ink and paper. If the order came between press runs, the printers would stop updating the presses with new material so they could start running the new edition as soon as the revised front page was ready.

At the top of each paper's front page is the 'Masthead'. It contains the paper's name, logo, often a slogan such as 'All the News That's Fit to Print', the date and edition (Morning or Evening). If the paper is changed after the printing has begun, or a new edition is printed before the next scheduled run, the edition name is changed to 'Extra' so it can be discerned from the original copy. If some of the presses have already been updated for the next edition the entire paper will usually be printed 'as is' to get it on the news-stands as quickly as possible. Some 'Extra' editions contained only the revised front section, but most included the entire paper so customers would not feel that they had been cheated.

Extra Extra – Read all about it!

As soon as the 'Extra' edition hit the streets the newsboys, who were paid a small fee for each paper they sold, would begin shouting to draw attention. The fact that the Editor had seen something important enough to disrupt the smooth flow of their publication implied that the new edition had something worth reading.

When are 'Extras' Published?

The Japanese attack on the US Naval base at Pearl Harbor on 7 December, 1941, and the assassination of US President John F Kennedy on 22 November, 1963 both occurred in the middle of the day in the continental United States and were the subjects of 'Extra' newspaper editions. While the death of Diana, Princess of Wales, was probably one of the biggest stories in last few decades, she died in the night – the newspapers had plenty of time to put the details in the regular morning edition.

Although the above examples are a bit extreme they serve to illustrate the point. Far more mundane events have triggered an 'Extra', like the conviction of Washington DC's Mayor, Marion Barry, on drug charges. The wary Editor would also remember the boy who cried 'wolf' once too often.

As this is written in the spring of 2013 almost all our news is received online or by television. The terms 'Bulletin' or 'Breaking News' have pushed the 'Extra' edition of the newspaper into the historical collection with hitching posts and buggy whips. It is now probably only a matter of time before the newspapers themselves disappear from our street corners.

Image courtesy of Library of Congress
1Well, yes they still do, but unfortunately the newspapers no longer notice them.2A scoop is newspaper slang for an unexpected story, particularly an exclusive one.