The Legend of Tom Bawcock of Mousehole and his Stargazy Pie Content from the guide to life, the universe and everything 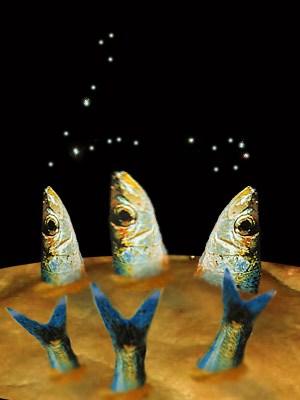 Stargazy pie is a traditional Cornish fish dish which, according to local legend, commemorates Tom Bawcock, a heroic fisherman from Mousehole1.

Mousehole is a coastal village in the parish of Penzance which is part of Cornwall, the westernmost county of England. This region is recognised as an area of natural beauty, and as such it is very popular with tourists. Locals today don't have to rely on fish for sustenance to survive, but in the distant past their lives depended on the bounty of the sea. As fish don't leap out of the sea and land in people's kitchens, most of the able-bodied men had to risk their lives by fishing in treacherous waters. Fresh fish can sustain a community on a daily basis, but they had no means of refrigeration to store it for lean times when fishing was impossible, like during a storm.

Such a storm occurred one week during December in the 16th Century. Fishermen could not set sail in such a tempest, for fear of risking their lives, so their boats remained tied up to the moorings in the harbour. The inhabitants of Mousehole faced starving to death but the actions of one brave man saved them all. Tom Bawcock took his boat out on 23 December and St Peter, the patron saint of fishermen, must have been guarding him well. He returned to port safely, and with a full catch of seven different types of fish. These were baked in a huge pie, the villagers were so hungry that nothing was wasted, not even the fish heads. The storm receded and life returned to normal, but the residents of Mousehole did not forget their saviour. A festival is held in his honour on the anniversary of his heroic mission, with singing, dancing and other shenanigans such as people dressing like pirates. Mousehole harbour is lit with Christmas decorations, including one in the shape of a Stargazy pie and there is a lantern parade which is very popular.

The landlord of the local pub, the Ship Inn, prepares Stargazy pie for locals and visitors alike to enjoy on Tom Bawcock's Eve, which is celebrated on the evening of 23 December. As well as containing fish (usually pilchards, but can be sardines or herrings), the pie consists of hard-boiled eggs, chopped bacon, fresh breadcrumbs, chopped onion, milk, the zest and juice of a lemon, herbs and dry cider. However, the most unusual feature is the fish heads (and tails, if wished) poking through the pastry topping, giving an effect of the fish admiring the starry sky as they surface. In between the fish heads the topping can be decorated with the pastry remains, trimmed into star-shapes and a crescent moon to give the effect of the night sky reflected in the sea.

Some people might find the sight of fish heads adorning something they were about to eat a bit stomach-churning. In fact the Stargazy pie appeared at number nine on a list of the most disgusting things people consume, according to the New York Daily News. It was sandwiched between dried lizard from Bangkok, Thailand, and snake whisky from Hanoi, Vietnam (the bottle contains a whisky-pickled King Cobra). Nevertheless, a rabbit variation of the Stargazy pie, using crayfish in place of fish heads, won the Great British Menu in 2007 for chef Mark Hix.

In the Poldark series of books by Winston Graham, bride Demelza serves up a Stargazy pie to her new husband Ross Poldark, in a bid to impress him with her culinary skills. In the BBC television adaption, this scene was played with great comedic effect as Ross tried to suppress his natural revulsion at the sight of fish heads served up for his supper, while trying not to upset his wife.

The children's book The Mousehole Cat by Antonia Barber is all about fishing, Mousehole and Stargazy pie.

Why the Devil left Cornwall

Plymouth-born Robert Hunt (1807-87), a scientist of some note and collector of Cornish traditions, wrote that the Devil traversed Devon and crossed the River Tamar on his way to Cornwall. Espying a local couple eating a Stargazy pie, he realised Cornish people would make a pie of anything, so he hot-hoofed back to Devon before they could create a devilled Devil delicacy!