The South West Coast Path: Land's End to Penzance Content from the guide to life, the universe and everything 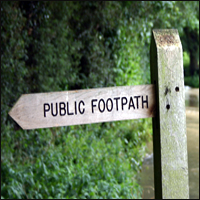 The South West Coast Path is one of Britain's National Trails and, weighing in at a mighty 1,015km (or 630 miles), is its longest. It covers the whole coastline between Minehead, in Somerset, and Poole, in Dorset, and can be tackled as a series of day walks or all in one go. The Entries in this series are suitable for either type of walker. All routes are described in the traditional anti-clockwise direction of travel.

As on much of the coast path, wheelchair users and those with push-chairs and prams will find the going difficult away from the more accessible beaches, mainly due to the steep hills - in fact, the South West Coast Path has ascents totalling more than three times the height of Everest! Sections of the coast path can be remote and difficult, and walkers should make sure they have taken sensible precautions in case of an emergency:

The End Is Just The Beginning

While often seen as a major landmark, Land's End doesn't have much to keep you occupied. Mainland England's most westerly point doesn't even mark the half-way point of the Path1. The theme park is pretty tacky and decidedly unimpressive, and the coastal scenery isn't that spectacular compared with what's to come. It is, however, a good chance to pick up something sweet that you'll need to keep you going later.

This walk is hard, with 30km (approx 18 miles) between Land's End and Penzance; only the last couple of kilometres between Newlyn and Penzance train station could be described as easy. Walkers will find themselves constantly climbing or descending - you go from 60/70m down to sea level and straight back up again around 12 times2. An experienced and fully fit hiker, in good conditions, could complete the walk in a little over five hours while most people will be looking at seven, eight or even nine hours. Don't let this be a deterrent; for their efforts a walker will be rewarded with some of the most incredibly beautiful coastal scenery for pretty much the entire walk.

The walk can also get very remote, apart from Porthcurno and Lamorna you won't reach another settlement until Mousehole3, which is one of the best features of the walk, but it does mean you do have to carry everything with you4. It's also nice to have someone to keep you going, to get you up the next climb and down again. A final word of warning: the geology of the bays and headlands can make some of the coves quite difficult to get into and out of, Lamorna being especially tricky as the hiker has to scramble up and down a couple of (mercifully small) rock faces and edge along a narrow ledge that is over a drop of approximately 40 metres into the sea. This is not a walk for those with mobility problems or vertigo.

OS Landranger Map 203 covers the walk in 1:50,000 scale while Explorer Map 105 covers it in 1:25,000 scale, giving more detail. Happily, this is one of those walks where navigation isn't really an issue, as the path is usually the thing between the sea and the cliffs.

Turning left at Land's End the path goes south-east around a number of bays and headlands, heading towards Gwennap Head. This stretch is quite gentle, the path wide and generally flat; Mill Bay marks the only real climb and descent, and is a good warm up5. Once you've rounded Gwennap, the path turns almost due east and the main body of the walk has begun. You descend into Porthgwarra, which isn't too bad, but the descent into St Levan follows almost immediately, which is very steep and followed with a climb all the way back up. Just around the next headland lies one of the gems of the walk, Porthcurno and the Minack theatre. Beyond Porthcurno the path settles into its rhythm, up and down with each tiny valley, with plenty of stunning coastal scenery, and the walker is pretty much always heading east and walking up or down a slope.

Only a couple of places break the consistency of the walk: Porthguarnon, where a high footbridge crosses the valley, saving a slog up and down as well as giving stunning views, and Saint Loy's Cove, which has a beautiful beach. This is roughly the mid-point of the walk and a good place to stop for a rest, making a nice change to walking up and down the cliffs.

After St Loy's Cove the path continues east until Lamorna, which, as previously mentioned, is tricky to get in and out of. It also marks the last killer descent and climb. While you'll continue to go up and down, this is the last time you go from the top of the cliffs to the bottom and back up. You start to get views clear across Mount's Bay to the Lizard peninsula6 as well as the beautiful beaches of Praa and Porthleven Sands. You also turn north, heading to Mousehole and Penzance. Mousehole is a charming village strung along the cliffs and, although you've got another 5km to do, the hard walking is over and you're soon on the promenade of Newlyn and Penzance, a wonderfully relaxing way to end a long day's walking.

If you've arrived at Land's End not knowing it was Britain's most south-westerly point, there's no chance you could leave it not knowing it. The hotel/theme park doesn't remotely fit in with the surroundings and is very tacky, but some people might like it. On rare occasions, when visibility is very good, you can see the shadows of the Isles of Scilly, over 45km away.

Porthcurno and the Minack Theatre

Porthcurno is a small village in a small cove that was once one of the most vital and strategic places in the British Empire, thanks to the trans-Atlantic telegraph cable that came ashore here. During World War Two it was one of the most heavily defended places in the British Isles. Today it is where many fibre optic cables come ashore, though the communications are no longer handled here, they just pass underneath. It also has a delightful sandy beach. The Minack theatre is an open-air theatre on the cliffs above Porthcurno with spectacular views across the bay to Logan Rock. The theatre celebrated its 75th anniversary in 2007 with a special programme of events.

In addition to being a pleasant seaside village with a staggeringly beautiful harbour, Mousehole was the home of Dolly Pentreath, supposedly the last native speaker of Cornish7, who died in 1777. Just around the headland lies Newlyn, a small fishing village which has now merged with Penzance. Newlyn has a tidal observatory that was the basis for sea level measurement used around the world until the advent of satellite technology, and is the most lucrative fishing port in England, thanks to its sheltered harbour. Finally, Penzance has some attractive beaches and gardens, as well as all the amenities of a small town but little else to distract the walker from some well-earned sitting down.

Penzance and Newlyn have a number of lovely pubs looking out onto Mount's Bay, which are perfect for a well-earned drink. Walkers are recommended to avoid stargazey pie, the local delicacy. This consists of six different types of fish covered in pastry so their heads are poking through the crust. The combination of pastry, fish and a stomach that has travelled 30km is unlikely to be a happy one. Leave this one experience for later and get some fantastic fish and chips instead.

However, the biggest attractions on this walk are the sea, the sky and the scenery. On the right day8 the sea is unimaginably blue, and the sky achieves a similarly vivid colour. The cliff scenery appears all the more spectacular for the fact that you are part of it. Unlike some coastal walks where you stroll along the top of a cliff, or down at the bottom, this walk takes you up and down the cliffs, which gives a unique perspective. You can expect superlative views, especially when in a cove or between headlands, and you really feel you've earned them because of the effort put into getting there.

Getting There and Away

Land's End can, perhaps unsurprisingly, be tricky to get to for those without a car. There are only two bus services: one from Penzance and one from St Ives. The service between Penzance and Land's End can be quite useful for those who decide to drop out of the walk as it parallels the footpath a couple of miles inland9 — though out of season its timetable is pretty sparse.

The Cornish mainline terminates at Penzance, with services to London Paddington and occasionally10 to Scotland. Penzance also has a bus hub, with services to all the major settlements in Cornwall as well as many local services. Handily the train and bus stations are right next to each other on the path. St Ives is at the terminus of a branch line which meets the mainline at St Erth, though services on this line are much less regular than on the mainline.

It is possible to fly to Land's End, using Land's End airport. The drawback is that, unless you have a private jet, you can only fly from St Mary's in the Isles of Scilly.

Although this walk is described in the traditional anti-clockwise direction, it is generally considered better to walk from Penzance to Land's End for a number of reasons:

1Which actually lies between Coverack and Helford, about 50 miles further on.2Pretty much once a mile in the middle section beyond Land's End and before Newlyn.3Pronounced either maw-zle (first syllable rhymes with war) or mow-zle (first syllable rhymes with cow). Don't ask why, the Cornish just do this sometimes.4Including lots of water - you'll need it!5Or blessed relief for those coming from the other direction.6Mainland Britain's most southerly point.7Though her claim has numerous rivals.8And you really don't want to be doing this walk on the wrong day.9Although its circular route goes in the wrong direction - it takes you back to Land's End before it takes you to Penzance.10Once or twice a day.