The Origins of Writing - Clay Pidgin? Content from the guide to life, the universe and everything 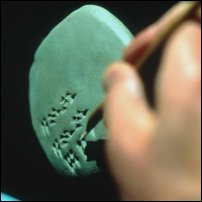 The act of writing, unlike speech, is not an innate human ability; it is learned, or discovered, over time. So, who discovered it first? Archaeological evidence suggests the earliest organised system of writing was in India. For Western civilisation, arguably the oldest surviving records were in Sumerian, the language of peoples who lived about 5,000 years ago in southern Mesopotamia (where Iraq is today).

Some people have suggested that the Egyptians farther west can justifiably claim historicity for the earliest writing with their pictographic hieroglyphics. But that discussion will have to wait until another Entry.

The Sumerian language had a system of picture writing consisting of over 1,500 symbols, representing objects, numbers and ideas. These were inscribed by a pointed stylus on pieces of clay tablets which were then baked to preserve them. Objects were depicted as picture representations, numbers by repeated shapes (lines or circles) while proper nouns used the 'rebus'. A rebus is something of a literary device in which the name of the object depicted stands for the sound of word/syllable. Many of us have, sadly, had to use a rebus - IOU!

All well and good, but where did this writing system come from? Did the Sumerians invent it or was it developed from something even older? The French-American archaeologist, Denise Schmandt-Besserat, has proposed that it developed from a form of accounting.

Schmandt-Besserat's theory goes something like this: in many parts of the world, people - Romans, for example - used small objects (stones, bits of wood and the like) as tokens to keep records of accounts and transactions (the Latin word for small pebble - calculus - gives our word 'calculate'). Such small objects made of clay, such as spheres, cones, discs and cylinders, have been found over the whole of the Middle East. The earliest have been dated from about 8000 BC, just about the time when the hunter-gatherer was becoming a farmer. Different-shaped objects are, naturally, thought to have represented different things.

From around 3500 BC, with the growth of cities, these objects came to be used in a new way. If a farmer or cloth-maker sent goods to the city, he also sent a record to show how much merchandise there was.

So, if he sent 50 sheep, he would send 50 tokens inside a baked clay sphere closed up with his personal seal - his signature, as it were. The receiver of the goods would break open the sphere to check the contents matched the goods received. Later, the idea grew of marking the outside of the sphere with pictures of what was inside to avoid breaking it open. These pictures resemble the cuneiform markings dated some 500 years later.

Later on still, people felt they could do away with the spheres altogether and put the pictures on flat pieces of clay. More and more transactions and messages were put onto flat pieces of clay (and sometimes wood) and modern writing was born. Eventually, a blunt stylus took the place of a pointed one. Why this should have happened is a mystery but it meant that the symbols generally didn't look very much like pictures any more.

The wedge-shaped figures that are seen on tablets from about the middle of the 4th millennium BC were named cuneiform, from the Latin for wedge (cuneus).

The next step in the process was a move from a pictographic style - where the symbol represented an accepted meaning - to a phonographic one - where it stood for a recognised sound. The Sumerians made this shift but only as a last resort. If they could 'translate' things into pictures, they did so; only ambiguous or impossible-to-draw items were 'phonographed'.

Note: 'Pidgin' in the title of this Entry is used here in its original sense, defined by the Oxford dictionary as being from the late 19th century: Chinese alteration of English 'business'.