'The Persuaders!' - the TV Series Content from the guide to life, the universe and everything 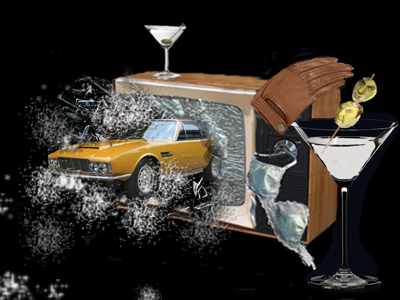 The Persuaders! is a British spy-fi telefantasy series of 24 episodes that was first broadcast in 1971-72. Starring Roger Moore and Tony Curtis as two wealthy men who frequently find themselves embroiled in implausible situations but emerge victorious in the end, each episode is a glorious adventure filled with style and humour.

The series was devised and produced by Robert S Baker, who had also produced The Saint - The Persuaders! built on the idea from an episode of The Saint in which Simon Templar joined forces with Rod Huston from Texas. Terry Nation wrote six episode screenplays and was credited as the script consultant and associate producer. Brian Clemens of The Avengers fame wrote three of the screenplays and Roger Moore himself directed two of the episodes. The thrilling theme music was written by John Barry who was well known for composing James Bond themes.

The first episode sets the scene for the series. Two strangers are brought together on the Côte d'Azur by Judge Fulton, a retired judge who saw too many criminals evade punishment so he has vowed to take matters into his own hands. The men fall into Fulton's power after they fight each other1 - Judge Fulton promises to help them avoid prison as long as they help him to carry out his plans. Once they are acquitted, the strangers find they have a lot in common, and decide to continue working together as they have nothing else to do.

Judge Fulton was played by Laurence Naismith, a veteran film and TV actor known for playing the Captain of the Titanic in A Night to Remember, and the First Sea Lord in Sink the Bismarck!, amongst many other roles2.

I'm Brett and This is My Friend Danny

Lord Brett Sinclair is a British aristocrat, educated at Harrow and Oxford, who has inherited a fortune.

Sinclair is played by Roger Moore, who had become famous through his role as The Saint in the spy-fi series of the same name. As a result, he was somewhat reluctant to take on a similar role after The Saint ended, but agreed to become a Persuader when Lew Grade, the owner of ITC (Incorporated Television Company), persuaded him.

Daniel 'Danny' Wilde is an American who lived in a New York slum as a child, but he made his fortune through oil deals and Wall Street trading.

Tony Curtis plays Wilde. He was well known for films including Spartacus and Some Like it Hot but eagerly agreed3 to take the television role of a Persuader after Rock Hudson and Glenn Ford had turned it down4.

Moore and Curtis were said not to have got on well during the making of the series, as they were very different people - for example Moore smoked heavily while Curtis was a member of the anti-smoking lobby, although he was partial to marijuana. However, a 2006 interview indicated that they enjoyed joking around with each other even though they didn't often approach their work in the same way.

The episodes are reminiscent of buddy movies such as the Road To... films with Bing Crosby and Bob Hope. The friends are very tactile - Brett sometimes touches Danny's face, or Danny strokes Brett's hair, and they often link arms or share smouldering glances. However, there are also numerous attractive women who appear for them to compete over, too - as long as nobody mentions the word 'marriage'.

Eye for the Ladies

Although many of the female characters were simply there to enable Brett and Danny to prove they didn't only have eyes for each other, some women played key roles in the adventures.

Brett's cousin Kate writes detective fiction and teams up with Danny when other members of the Sinclair family start dying in suspicious circumstances. In Spain the beautiful Lisa engineers a plot using the Persuaders to help her escape from her father and marry the man she loves. The Persuaders are called in for heiress Jenny Lindley when her dead brother turns up to claim the inheritance. In Italy, Sidonie (played by Joan Collins5) helps in the Persuaders' mission to bring a gangster to justice.

Each episode generally features the Persuaders either being assigned a task by Judge Fulton or being innocently entangled in an incident6. One or both men may be captured, women get involved, and then there will be guns and a fistfight before everything works out well in the end.

Clothes play a key role in the series. The two men are well dressed for the time as they can afford the latest fashions. Brett favours sharp suits with a cravat or a ruffled shirt, while Danny chooses leather or suede jackets and tight trousers. Both wear their hair quite long - Danny has dark hair with bold sideburns, while Brett has glossy chestnut locks brushed away from his face. Brett Sinclair's outfits were credited as being designed by Roger Moore, as he had some input into his wardrobe - there were vague plans to create a spinoff menswear brand, as Moore had become a director of a fabric company in 19687, but this didn't happen.

Befitting their wealthy status and playboy image, Brett and Danny each have their own sports car. Danny has chosen a red Ferrari, while Brett drives a yellow Aston Martin.

Again reflecting the characters' wealth, the pair often travelled to glamorous locations including Italy, Spain and Sweden. As a result of this, on top of the stars' salaries and everything else that was required, the episodes were rather expensive to make - the whole series cost £2.5 million, which was a record at the time. However, the show was successful in the UK and Europe, so the efforts paid off.

The series had not proved successful in America, though, in spite of starring Tony Curtis (it had been broadcast at the same time as the well-established and highly popular series Mission: Impossible, so it struggled to compete). Suggestions were proposed for a second series to be set on location in countries further afield including South America, but whether because of budgetary constraints, or because Roger Moore was about to be invited to take the role of James Bond, or because of other reasons, no further episodes were made. Even so, the series remains a classic that is still enjoyed today.

1About whether the cocktail 'Creole Scream' should have one olive in it, or two.2Including parts in Jason and the Argonauts and The Valley of Gwangi which contained special effects by Ray Harryhausen.3According to Curtis' autobiography, he was struggling to find work in the US and needed money to support his growing family.4In Roger Moore's autobiography My Word is My Bond, he claimed they were turned down as he didn't want to work with Glenn Ford again, and thought that Rock Hudson looked too much like him.5Tony Curtis famously refused to work with her again, as she needed to 'get into the mood' before each scene and he lost his temper.6Even buying a house isn't straightforward when Danny's new country cottage turns out to be at the centre of a sinister plot.7Not to mention he had been a model for knitting patterns in the 1950s.