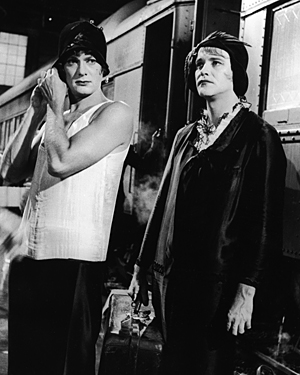 If someone said 'You must see this black and white film, it's set in the context of prohibition and gangsters' the memory of a hundred clichéd films will probably send you running.

But before you slip into your trainers and adopt the sprinting position, let's tell you some more. Some Like it Hot stars the dynamite comedy trio of the late Tony Curtis, the late Marilyn Monroe and the late great Jack Lemmon, with all of them wearing dresses for most of the film. It has guns, gals, comedy, Cary Grant impressions, tragedy, killer songs and killer punch lines (and they save the best one for last).

The plot twists and turns. Basically Curtis' and Lemmon's characters are musicians on the run from the mob, after witnessing a murder. Being broke and without transport, they only have one option - to join an all-girl jazz band. The band is going off to do a summer season at a Florida beach-side hotel, a location popular with millionaires, who moor their yachts nearby.

The boys settle in to their new lives quickly with Lemmon enjoying female bonding (while trying to avoid the attentions of a randy millionaire). While Lemmon is doing that, Curtis is planning a way to get together with the lead singer of the band (played by Monroe in a series of revealing attires), without giving the game away.

The film finishes with the boys on the run again following a twist of fate that brings their pursuers to the same hotel.

The music is fantastic - 1920s classic big band jazz - the filmmaking is brilliant, the casting is spot on and Billy Wilder's direction got the best from cast and crew. See it any way you can, but it must be said you can't beat the atmosphere of seeing it on the big screen especially in a period cinema.

If you don't laugh out loud at this film you better check your pulse...

Apparently - thanks to Monroe - the film was hell to make. The stories about Monroe's lateness to turn up and her inability to remember her lines are legendary: in fact Tony Curtis at the time grew to hate her so much that when asked what was it like kissing Monroe, he said, 'it was like kissing Hitler'.

Wilder had many stories about her lateness on set. In his words one day Marilyn was supposed to be on set at 8.30am and she turned up at 2.30pm, and when he asked her what had happened she said 'I got lost'. He said:

We are filming at 20th Century Fox under whose contract you've been for six years, you have not moved house, the studio had not switched to somewhere else over night, so on the journey you must have done a 1,000 times, you get lost turning up six hours late?

There was a scene where all Monroe had to do was walk up to, and knock on, the door of a room with Curtis and Lemmon inside. She simply had to say 'It's me, Sugar' when Curtis asks 'Who is it?'. She over and over again got it wrong: 'Sugar it's me'; 'Cut!' She walked up again - 'It's me Sugar'. They eventually had to place a little sign just out of camera shot and on take 47 she got it right. Once inside the room things didn't get any better: after 63 attempts she finally managed to pull open various drawers and say 'Where's the Bourbon?'. You guessed it, inside the drawers were little notes saying 'Where's the Bourbon?'.

That said, the director has been quoted saying:

It should be easy to create a Marilyn Monroe, just get a small blonde girl with a sweet face, they should be coming out of the woodwork, but they aren't and they never were and never have been, she was very much one of a kind.