'Monsters Vs Aliens' - the Film Content from the guide to life, the universe and everything 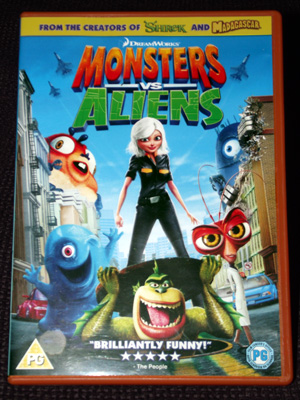 Monsters Vs Aliens is a computer animated film produced by DreamWorks. It was released in 2009. It cost about $175 million to make and grossed about $380 million in cinemas worldwide, making it a modest success. Monsters Vs Aliens was directed by Rob Letterman (who had co-directed DreamWorks' Shark Tale) and Conrad Vernon (who appeared as the Gingerbread Man in Shrek and co-directed Shrek 2).

In the film, it is 1968. Susan Murphy is on her way to be married when she is hit by a giant meteorite. She extricates herself and makes it to the church on time, but during the ceremony she suddenly grows to 50ft tall. The military capture her and she is taken to a secret base where she meets four fellow 'monsters' and is enlisted to help save the Earth from an alien invasion. Does size matter in the battles of Monsters vs Aliens and Monsters vs Humans?

Susan Murphy is voiced by Reese Witherspoon, of Legally Blonde fame. After being turned giant-sized by a substance called Quantonium, Susan's 'monster name' is Ginormica.

Dr Cockroach PhD, a scientist whose experiments often go awry, is played by Hugh Laurie. Before lending his voice to this film, Hugh had become well-known in the USA through starring in the TV medical drama House and for playing the adoptive dad of the eponymous mouse in Stuart Little.

Seth Rogen voices Benzoate Ostylezene Bicarbonate, or B.O.B for short, a blob of blue goo with one eye. Seth had provided voices for other DreamWorks animated films, as well as being known for comedy films such as Knocked Up (2007).

The Missing Link is played by Will Arnett, who had had various film and TV roles before providing his voice in this film. He went on to play key parts in TV series such as 30 Rock and Arrested Development. 'Link' is an amphibious creature who spends time under water (when he likes to lift weights), but who can also walk on land. He likes to think of himself as macho, but gravity doesn't always help his image.

Insectosaurus is a Godzilla-like giant insect who has a dinosaur tail, fuzzy fur and a loud roar. 'Insecto' is even taller than Ginormica.

Rainn Wilson, perhaps best known for appearing in the US version of sitcom The Office, plays Gallaxhar, an alien. Gallaxhar has a range of technology at his disposal, including a machine with the ability to clone him, but he needs the Quantonium.

Susan's parents Wendy and Carl are voiced by Julie White (perhaps best known for playing Judy Witwicky in the Transformers film franchise) and Jeffrey Tambor (who had appeared in Arrested Development amongst many other roles) respectively.

Susan's fiancé   Derek Dietl, a weatherman eager to advance his career, is voiced by Paul Rudd, who had appeared alongside Seth Rogen in Knocked Up, amongst other roles. Paul Rudd and Reese Witherspoon recorded some of their lines together to increase the emotion and interaction between the two characters, a technique that DreamWorks had become known for1.

Kiefer Sutherland (Jack Bauer in the TV series 24) plays General WR Monger, a strong general who has respect for the monsters in his charge.

Writer, producer and actor Stephen Colbert plays President Hathaway, a handsome man who seems out of his depth when facing the alien threat.

There is a cameo by Renée Zellweger of Bridget Jones's Diary fame, who had played the female lead in the 2007 DreamWorks film Bee Movie. She plays Katie, the tough girlfriend of a wimpy male gymnast. Amy Poehler, who had played Snow White in Shrek the Third, provides the voice of Gallaxhar's computer.

Although the film seems mostly aimed at children2 with its bright colouring and funny scenes, an amusing part of the film for adults is looking out for the references to other films. A key inspiration is the 1950s B-Movies such as The Blob (which influenced B.O.B), The Fly (which inspired the creation of Dr Cockroach) and Attack of the 50 Foot Woman (which influenced Ginormica). The War Room scene is a tribute to Dr Strangelove. Other DreamWorks films, and films by DreamWorks founding member Steven Spielberg, feature - the porridge Susan is given in the secret base is made using the design for mud in Shrek, the President plays the tune from Close Encounters of the Third Kind when he first meets the alien's robot, and 'ET Go Home' is written on a missile, for example. Various inside references are also incorporated, such as the names of characters being names of people in the production team and one of the locations is called FAB220 in reference to DreamWorks' Feature Animation Building.

The humour in the film ranges from visual gags that children would appreciate to comedy that would be appreciated more by adults. For example we see a security system that involves retinal scans and also a photocopy of people's bottoms. Toilet humour also features - serious incidents are 'Code Brown' when President Hathaway needs to change his pants. The big red button that the President uses to dispense a latte looks exactly the same as the big red button that launches nuclear missiles. The plot was intended to be more political, with the alien wanting oil, but it was changed to the alien wanting the Quantonium that had been absorbed by Susan as that was felt to have more comic potential. Some political satire still features in the film, though, such as the suggestion in the war room that they could 'install an approved government' inside the alien robot, and the Missing Link wants to know if the Earth has got warmer since he last went outside - 'It would be great to know that; it would be a very convenient truth'.

An important theme is that the film was made to be shown in 3D. This again links to the 1950s films that pioneered 3D techniques, and influences the scenes that appear. For example, at the start of the film we see a man idly playing with a paddleball - the ball bounces towards the audience before being pulled back to the paddle by its elasticated string. The scenes set in the alien spaceship and among the buildings of San Francisco contain impressive depth too.

The animation displays excellent attention to detail. Facial expressions are superbly emotive. Water is well depicted as it is churned up during the battle over the Golden Gate Bridge. Susan's movements as she makes her way through San Francisco are very realistic, as the animation was based on the motion of Lena Anderson, a supervising animator, who was filmed walking through a model of the city. Dr Cockroach's makeshift laboratory equipment is also well depicted, as he uses plastic bottles and even a toaster in his attempts to help Susan.

The music is well-chosen to fit in with the film. The song 'Tell Him', that was Ally McBeal's personal theme tune in her show, is a good accompaniment to Susan's wedding preparations when she has doubts about the man she is to marry. The song played over the credits is the catchy 'Planet Claire' with the bassline from Henry Mancini's 'Peter Gunn', followed by 'The Purple People Eater'.

Monsters Vs Aliens was released on DVD in 2009. Extras include audio commentary by the directors and producer, 'making of' features, three deleted scenes, and a button that says 'Do Not Press'3.

The Monsters Vs Aliens Game for PlayStation 2 was released in 2009. It is an action game offering players the opportunity to take the role of Ginormica, or other characters, as they move through levels set in the city and on the alien spaceship. Gameplay involves some cartoon violence - kicking and punching for example - so the game is only suitable for people aged ten and above.

1For animated films, it had been more usual for each voice actor to record their lines separately, so that the soundtrack could be edited together later.2Although it is rated PG in the UK because of mild bad language and some cartoonishly-violent scenes.3Go on - press it! You know you want to...