How to Make a Proper Russian Table Content from the guide to life, the universe and everything 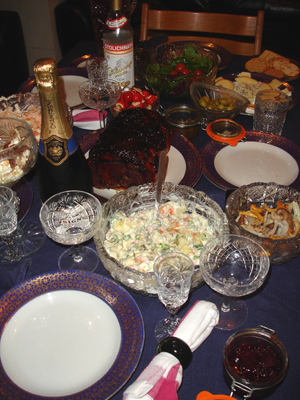 Apologies to anyone who was expecting obscure carpentry techniques, but 'making a table' is a literal translation of what Russians call throwing a dinner party. A certain amount of socialising in Russia still centres around going to other people's houses rather than out to a restaurant or the pub or a club, and as a result Russians like to do the thing properly. In fact, they practice a form of aggressive hospitality that is hard to resist and may well do a version of this if you just drop round for what you assume will be a quick chat and maybe a cup of tea. Essentially, whatever the occasion, no guest must leave unstuffed!

The first thing you need to do is get out the best tablecloth, the best cut-glass wine glasses, vodka glasses and tumblers, the best plates, and the best cutlery. Making the table look nice is important.

Then there are the show stoppers - the presentation often makes the salad look, at first glance, indistinguishable from a cake. Chief among these are the layered salads - herrings 'under a fur coat' (layers of pickled herring, onion, boiled eggs, beetroot, boiled potatoes and mayonnaise) and mimosa (layers of tuna, boiled egg, grated cheese, mayonnaise and onion all topped with grated egg yolks to create the mimosa effect). 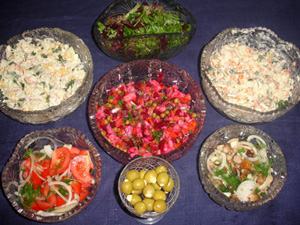 The one salad you cannot do without is salad Olivie. Called 'Russian salad' elsewhere in Europe, it was invented in Russia by a French chef, although he probably would not recognise the form it often takes today, which is a glorified mayo and potato salad with additions like boiled carrots, boiled eggs, cucumber (fresh or salted), peas, and, for the meat content, ham or chicken or even hot dog sausage. It is absolutely ubiquitous on any Russian celebratory table; the main New Year's Eve TV show, for example, is called 'Olivie' in its honour.

If you are drinking alcohol, most likely you will be drinking vodka with this meal. Wine is acceptable, but usually seen as an alternative drink to vodka for women. Do not under any circumstances encourage your guests to drink both wine and vodka. It will only end in tears, and despite what you may be expecting the aim here is not to get drunk.

In fact, you will be drinking the vodka only sporadically mainly when you, the host (or in the event that you are a woman, a man of your acquaintance), decide to propose a toast. So you will also need a large quantity of fruit juice, mineral water, mors (water which has been briefly boiled with the fresh berries of your choice and some sugar) or compot (made by steeping dried fruit in just boiled water) to sip in between times. Any empty vodka bottles should be placed on the floor (or in the bin) rather than back on the table, which is considered bad luck.

Toasting can have quite complex rituals attached to it, but you can relax a bit if you are among friends. Usual ones are to the good company currently being enjoyed, to the short time between the first and second toasts, to family, to health, to happiness, to absent friends, to any special diners such as the person whose birthday you are celebrating, to the laydeeez, and to the safe journey of anybody leaving.

Guests are expected to clink their glasses together, drink the vodka in one go and then quickly eat something. If you do not want to drink to the end, you signal this by merely raising your glass rather than clinking it. The toasts themselves may be quite short: 'Let our tables break from abundance, and our beds break from love!' or more elaborate stories with a 'moral' at the end.

But whatever you do, do not throw your glass into the fireplace afterwards. This is a Tartar custom originally and is not widespread. Also, unless you are celebrating with confirmed expats, do not say 'Na zdaroviya'. In Russian, the way people who live in Russia speak it, this is a way of replying to someone's thank you. If you want to toast health, the more correct form is 'Za zdaroviya'. 'Na zdaroviya' does seem common among Russian-Americans though.

After eating all the salads and cold meat and so on you and your guests may well feel full. Surprise! At this point it is time to bring out more food. The main course(s) in fact. If you are really going for it because, say, it is a wedding feast, it will be a fish course, usually sturgeon. Most of the time you will be able to skip this and go straight to some kind of hot meat or poultry dish.

Russians don't generally feel the need to go to town here, given the variety and richness of the zakustkii. A plain roast chicken, say, and some boiled potatoes are absolutely fine. You don't need veg because you will still have plenty of salad left. However, for some reason, after seasoning them with pepper and salt and smearing some oil over them, Russians often roast their chickens by impaling them upright on the neck of an old vodka bottle full of water. If you want to try it, stand the chicken covered bottle on a roasting tin or baking tray in the oven. This both speeds up the cooking time considerably - 45 minutes to an hour for a medium sized chicken - and also produces very moist meat. 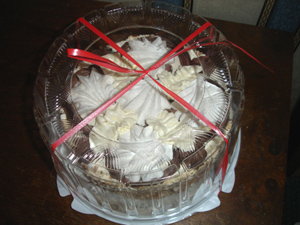 After everyone has eaten the chicken and drunk more of the vodka, the savoury dishes will be cleared off the table. This is to make way for the cakes, sweets, chocolates and fruit. In Russia, the host(ess) does not usually bake the cake themselves. Russians have a thriving patisserie culture and in lieu of the Anglo Saxon standard of a bottle of wine, guests will often turn up with a box containing a beautifully decorated and delicious example of the baker's/ confectionist's art.

Popular cakes include Prague cake, a chocolate cake first created at the famous Prague Restaurant in Moscow; Napoleon cake, made by sandwiching flavoured custardy cream between layers of filo-esque pastry; Bird's Milk cake1, layers of rich marshmallow and sponge covered in a thin layer of chocolate, also first thought of in the Prague Restaurant; and Flight cake, nutty meringue layers covered in a sort of vanilla flavoured buttery icing.

The best place to get hold of these cakes is from the delicatessen attached to the Prague Restaurant2 on the Old Arbat in Moscow. Or similar.

If this is not practical you can make them yourself, but they are extraordinarily fiddly and time consuming and really only to be attempted by expat Russians with a wild craving. If you are not such an expat, best to just bring the most expensive box of handmade chocolates you can find. And flowers3.

Russians will usually drink tea at this point, although coffee is not unheard of. Russian tea is taken black with lemon and most Russians like it sweet. Back in the day, a small bowl of jam would have been served with the tea, spoonfuls of which would be eaten in between sips instead of sugar. Many older people still drink it like this on occasion. Or just make do with cake.

To prepare tea the Russian way, the brew in the teapot should be very very strong, but then diluted before serving with more hot water. If you are going the whole hog, you would use a samovar to boil this water, but a kettle is perfectly acceptable4.

If you are thinking that all this will have taken a long time to make... sorry, eat, then you are absolutely right. A Russian table is not a thing to be rushed. But is this such a bad thing?

'To our get-together! May we meet up more often!'

1So called because it is such a rare and precious thing.2Surprise!3NOT even numbers, which is for funerals and therefore bad luck at other times.4See here for more information about this tea ceremony.