A Chronology of Garlic Content from the guide to life, the universe and everything 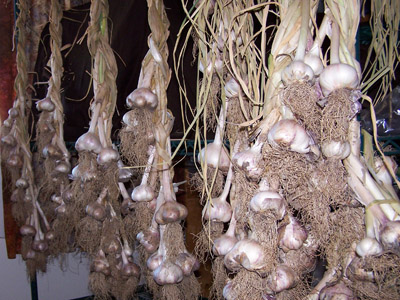 Most of us are familiar with garlic as a flavouring and it has become a common ingredient in home cooking all over the earth, far more than would have been the case 20 years ago. Although its global popularity has occurred relatively recently, garlic has been used and highly regarded in many cultures for over 5000 years, both as a culinary aid and as a cure for almost any disease of the human body.

The ancient Egyptians worshipped garlic and even placed it in the tombs of their dead. The remains of six garlic bulbs were discovered in the tomb of Tutenkamen and clay models of garlic were found in other graves, thought to be offerings of less wealthy Egyptians who couldn’t afford the highly prized herb. It is also the oldest known medicinal herb which was used in Ancient Egypt, Greece, Rome, the Orient and China; even the first Chinese writing refers to suan the Chinese name for garlic.

In medieval times garlic was bound up with superstition. Bunches of garlic were hung on doors or under the eaves to keep vampires at bay, or worn around the neck or waist as a protection against the evil eye. It must have worked as vampires no longer bother us and the evil eye hasn’t been seen in aeons. Later, in the middle ages, monks chewed garlic all day to protect themselves from the plague, although their breath probably kept the disease-ridden population far enough away for this to be no longer a problem.

Many people have believed that garlic improves physical and mental strength; Roman soldiers ate garlic before battle, Greek athletes took it before a race, Syrian peasants before harvesting and the workers building the pyramids were issued garlic with their rations so that they could chew it all day long as they manhandled the heavy blocks into position.

In our own times garlic has been used to combat all forms of illness. During World War II, when antibiotics were scarce, garlic was placed on wounds to prevent infections. It has also been used to reduce blood cholesterol levels, reduce the risk of further heart attacks in cardiac patients and as a stimulant for the immune system. Garlic is also on top of the list of foods being investigated by the US National Cancer Institute as a weapon in the fight against cancer.

The best way to preserve garlic's magical properties, and to ensure that you are gaining full benefit from this herb, is not to cook it for too long. It should be added only at the end of cooking, rather than at the beginning, and if you are not too keen on the taste, use only half a clove, finely chopped, and gradually increase the amount; then you too will be able to benefit from this glorious herb.