The Gregorian Calendar and 30 February Content from the guide to life, the universe and everything 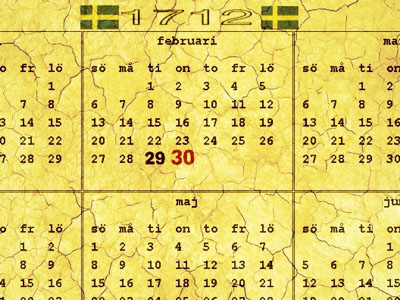 The Earth goes around the Sun once every 365 days. The seasons of spring, summer, autumn and winter repeat themselves in a regular cycle every revolution of the Earth around the Sun and we call this cycle a year.

Unfortunately, the figure of 365 is only approximate. A more exact figure is 365.2421897 days. That little 0.2421897 causes so many problems. If we used a calendar with exactly 365 days in every year, we'd find that the seasons shifted by about a quarter day per year, so that each season would start a quarter day later each year. After 730 years, winter would be starting at the time we'd expect it to be summer and vice versa.

To get around this, various people have come up with different ways of tackling the problem. The Arabs, for example, base their calendar on the Moon. A year is 12 full cycles of the Moon from New to New, and doesn't bear any relation to the Sun or the seasons; it's about 354 days long. The ancient Egyptians used the 365-day year and just put up with the fact that in some parts of their history the summer was early in the year and in others it was late.

In this system, every fourth year is a leap year. An extra day is added to one month, February, which means that the year is 366 days long instead of 365. With the introduction of the AD system which numbered each year, it was easy to work out which year should be a leap year: if the AD number was divisible by four, then the year was a leap year.

The average length of the calendar year is thus 365¼ days which is within 11 minutes of the correct figure. In this system, the seasons will arrive 11 minutes earlier each year. This is slow enough that it will take 128 years before the seasons have moved by a day, and 23,000 years before they will have done a full reversal with winter happening when it should be summer.

This calendar was devised during the time of Julius Caesar and was used more or less without change until the 16th Century. (There were changes made to the lengths of the months, but none that affected the length of the year.)

Pope Gregory and the Gregorian Calendar

In the time of Pope Gregory, theologians noted that the seasons had moved forward by ten days since the time of Jesus Christ. The events of Easter described in the Bible were supposed to happen around the spring equinox but were now happening ten days earlier. If this continued, eventually Christians would be celebrating Easter in the middle of winter. This was felt to be contradicting the Bible, since Easter was said by the Bible to be in spring.

The Gregorian system has 97 leap years in every 400 years, as opposed to the 100 leap years in 400 that the Julian calendar uses. In general the leap years are every four years, but the years which are centuries, but not divisible by 400 are not leap years. In detail:

Due to this very small difference, the seasons will arrive later by 27 seconds each year, and it will take a whole 3,200 years before this error has accumulated to a full day.

Adoption of the Gregorian Calendar

The Gregorian calendar was proposed by Pope Gregory XIII so it was almost immediately adopted in Roman Catholic countries such as Italy and Spain. To get the calendar back in line with the seasons, ten days were omitted so that 4 October, 1582, was followed by 15 October, 1582.

Protestant countries and countries of the Greek Orthodox faith, on the other hand, weren't going to change their calendar just because some pope said so; they stalwartly continued to use the old Julian calendar. For hundreds of years there were two separate calendars being used in Europe, and they were different by ten days, so it might be one day, month and year in one country and a different day, month and year in the next.

The problem was compounded in 1700. By the rules of the Gregorian calendar, this year would not be a leap year, so 28 February would be followed by 1 March, but in the Julian calendar there was 29 February between these. The result of this was that from March 1700 onward, the two calendars were now even further apart, there being 11 days difference between the two.

Gradually the countries using the Julian calendar started to give in and change over. Denmark and Prussia changed in 1700. England and its dependencies, including the American Colonies, didn't give in until 1752, when 11 days were skipped. 2 September, 1752, was followed by 14 September, 1752. Sweden, after an abortive attempt in 1700 (see below) finally changed in 1753.

Among the last to switch were the Orthodox Christian countries such as Russia and Greece: Russia switched in 1918 and Greece in 1923.

Sweden decided that rather than suddenly skipping a load of days, they would switch over gradually to the new system. They planned to do this by omitting all leap days from the years 1700 to 1740.  At the end of this, their calendar would be in line with the Gregorian calendar. They started by omitting the leap day 29 February from 1700. This put their calendar one day out with respect to the Julian calendar still in use in some parts of Northern Europe, and ten days different from the Gregorian calendar used in Southern Europe and in other parts of Northern Europe, such as Denmark.

Unfortunately the side effect was that for the next 40 years, their calendar wouldn't match anybody else's in Europe, neither Julian nor Gregorian. Due to a war, they neglected to arbitrate for the years 1704 and 1708, so they were treated as leap years, and by 1712, the Swedish calendar was still one day out with respect to the Julian calendar. They decided at this stage to change back to the Julian calendar. To do this, for one year only they introduced a second leap day, 30 February, 1712, after the normal leap day, 29 February, 1712.

It is hard to imagine the confusion that such a step would cause in the modern world - it would take years to enable all the computer systems to be able to cope with such a date, for a start. People born on 30 February could spend the rest of their lives either complaining about never having a proper birthday, or dining out on the fact that they still hadn't reached their first birthday. And of course we would expect the day itself to be declared a public holiday, with parades and festivities. But the early 18th Century was a simpler time; the day appears to have passed in Sweden like any other.

As mentioned earlier, Sweden did eventually switch to the Gregorian system, in 1753.

Someone worked out that you could have an even more accurate calendar by leaving out a leap year every 128 years, rather than leaving out three leap years every 400 years. This calendar has never been used by anybody, but it would result in an average calendar year which is less than one fifth of a second different from the actual year. The seasons would move forward by one day every 480,000 years. In fact, the revolution of the Earth around the Sun varies by more than this amount due to various outside influences, so this calendar would be as accurate as the Earth itself is.

The complication of working out when to omit the leap year means that this system will probably never be adopted.

1The Julian Day numbering system is a different system and won't be discussed here.