Time and Date Content from the guide to life, the universe and everything 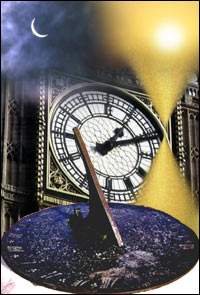 Firstly, this entry describes the recording of the moment, by time and date, in minute detail. Secondly, it acts as a reference for the unfamiliar constants used in time- and date-related calculations - for example 86,400, which is the number of seconds in a day. It is weak1 on strictly local issues, such as timezones, and only explains the Gregorian calendar system. The various constants are derived, and can be used, with simple arithmetic.

The time and date are a means used to identify particular moments, be they past, present or future. In rough terms, a day is the period between one sunrise and the next2, and a year is the larger period of a complete cycle of seasons. Between these is the period of phases of the Moon. These natural periods have influenced mankind throughout history, and are the basis of the modern time and date system.

For many purposes, a day is a rather large unit, so it is subdivided into hours, minutes and seconds (and, if necessary, seconds may be further subdivided). It's very convenient to subdivide a year, so months and days are used. Months appear to be arbitrary groups of days, but have an historic link to the phases of the moon. For very large periods of time, we use appropriately large numbers of years, although the terms 'century' and 'millennium' may be encountered, for 100 years and 1000 years respectively.

Loosely embodying the concept of date, yet being of short-term interest and so more akin to time, is the week. This is a completely regular cycle of seven days duration. Each day is named, and these names recur every seven days. Historically, one of the main uses of the week has been to schedule regular religious observances.

Time and date can now be determined with phenomenal accuracy3, which has not always been the case. The present calendar system is complicated, the result of several modifications as technology progressed. Part of this complication is because the natural year length is not a whole number of days. The Gregorian calendar is now widely used (at least in the Western world) to compensate for this awkward fact. Several Alternative Calendars exist, but are not further considered here.

There are 60 seconds in a minute, 60 minutes in an hour, and 24 hours in a day, thus 60×60×24 = 86,400 seconds in a day. The second used to be defined as a fraction of the average day4. We refer to the time, meaning the time of day, in terms in hours, minutes and seconds, although for many purposes the seconds are omitted. It is usual to use two digits for the minutes and for the seconds (when present), separating these numbers with a character which in England is a colon (but depends on locale). Thus 9:05:01 would represent nine hours, five minutes and one second. This is already awkward5, but there are two methods in common use to represent the time of day as well.

Time would be a strictly local measure, if accurately synchronised to high noon. It is very convenient if a single national time can be used, although large countries7 require several timezones if local time is to remain close to the natural time. This entry does not consider timezone corrections, so is effectively always referring to local clock time, that is, the time everyone agrees to use.

Some countries choose to adjust the time of day between summer and winter. The time is artificially advanced in the spring season, and retarded by the same amount in the autumn season. The time can be qualified by the system used, which in England means mentioning GMT (Greenwich Mean Time) in winter, or BST (British Summer Time) in summer. If not so qualified, there are periods each year when the time is ambiguous, close to when the clocks are retarded. If, as in England, the clocks are retarded at 2:00am, then half an hour before that, and half an hour after that as well, the time will be 1:30am. The earlier time is 1:30am BST, but the later time is 1:30am GMT.

The second is now (since 1967) defined in terms of atomic clocks, the first of which was constructed by the National Physical Laboratory. Such clocks can now be accurate to seven parts in 1015, and define a second as 9,192,631,770 periods of the radiation of a certain energy transition of the caesium 133 atom. Any error, of about one second in 4½ million years, must be tolerated for now!

It is a fact of life that there are 365.24219 days in the solar year, and the calendar system approximates this. Normally years have 365 days, but occasionally there are leap years of 366 days. The proportion of leap years is chosen so that the average length of a year is close to the solar year. The rules for leap years are:-

The origin for counting years is nominally the year of the birth of Jesus Christ8. When the Gregorian system was introduced, the existing Julian calendar year was retained, but the date within that year was adjusted. When the Julian calendar was introduced, errors were made in the reckoning of Jesus's birth year, and this error persists to the present day. To be pedantic - for example, the year 2000 should be called 2000AD9. The year 1AD was immediately preceded by the year 1BC10, and earlier years are obtained by counting forwards, so that 2BC precedes 1BC. Such dates were obviously not used at the time, but are a modern invention. Another modern invention, the misconceived concept of 'political correctness', has produced alternatives for AD and BC11, which almost everyone ignores.

Near a millennium, rule one alone gives the correct year length. Digital watches (and some computer software) take advantage of this, operating correctly from 1901 to 2099 because year 2000 is a leap year12. Prior to the year 2000, the first two rules suffice, as the last year requiring rule three is 1600, but the Gregorian calendar was not introduced until 1752 in England13. Rules one and two can be applied with only the last two decimal digits of the year (a common form of abbreviation), but rule three needs the last four decimal digits, that is the unabbreviated value. The use of historic dates is fraught with difficulty, because the present system was introduced at different times in different countries (and even now is not universally accepted).

Days in a year are grouped into named months, which in order are January, February, March, April, May, June, July, August, September, October, November and December (in English). The months have various lengths, but the shortest month is always February, and it carries the extra day which is required in a leap year. The lengths of the months may be remembered from the traditional rhyme:

Thirty days hath September,
April, June and November.
All the rest have thirty-one, except February clear,
Which has twenty-eight, but twenty-nine each leap year.

A three letter abbreviation is often used for the month name, and sometimes a simple number is used instead. They are shown below, in a table of the lengths of the months.

Within each month, the days are simply numbered, the first day of every month being one. A date can be represented in purely numeric form, giving the day, month and year, and separating these numbers with a character which in England is a slash (but depends on locale). The order of the numbers also depends on locale, so that numeric dates can sometimes be ambiguous, for example 1/2/2000 means either 1 February, 2000 (in the UK), or 2 January, 2000 (in USA). In conversation, the date sometimes just means the day number, as in:

The Gregorian calendar is nowhere near as accurate as our ability to measure time, and the average year is too long. The calendar is losing against solar time, and will be a day behind by the year 4909. Based upon the history of calendars so far, the system will be changed again long before then, perhaps the year 4000 will be declared not to be a leap year, effectively advancing the calendar by one day thereafter.

1 No more puns, honest! 2 Except in the polar regions. 3Quantified later.4 The rotation of the earth is slightly irregular. 5 It is a mixed radix system, using 24, 60, 60 as radices. 6 From Latin:-
ante meridiem means before midday,
post meridiem means after midday. 7 Those which span a wide range of longitude. 8See The Calendar in Anno Domini (AD).9 From Latin: Anno Domini means year of The Lord. 10 An abbreviation of Before Christ. 11 CE for 'Common Era' and BCE for 'Before Common Era' 12Explaining the small impact of the Millennium bug. 13 In most of Europe, it was introduced in 1584.