John Muir - Conservationist Content from the guide to life, the universe and everything 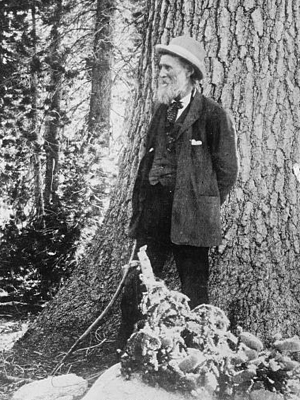 John Muir was one of the first modern conservationists and has also been called the founder of America's National Parks.

Muir was born in Dunbar, Scotland, on 21 April, 1838. During his childhood he developed a great love and appreciation for the natural world, spending much of his free time wandering the countryside and coastline.

When I was a boy in Scotland I was fond of everything that was wild ... I loved to wander in the fields to hear the birds sing, and along the shore to gaze and wonder at the shells and the seaweeds, eels and crabs in the pools when the tide was low; and best of all to watch the waves in awful storms thundering on the black headlands and craggy ruins of old Dunbar Castle.

His father, Daniel Muir, was a deeply religious man. He decided to move his family to the New World so he could follow the beliefs of a particular sect of Christianity, called the Disciples of Christ, based in America. In 1849 the family arrived and settled in Wisconsin in an area with other followers of this church. Daniel Muir spent a lot of time preaching and this eventually caused a degree of estrangement from his family, who hardly ever saw him.

The family had a farm, where John worked until he was 21. In his mid-to-late teens, John had developed a skill for inventions and started to build mechanical items such as clocks. At the age of 22 he left the farm to exhibit his inventions at the Wisconsin State Fair.

The following year, 1861, he went to the University of Wisconsin, where he studied for about two and a half years. He then returned home, awaiting a possible draft to fight in the US Civil War. When this wasn't forthcoming, he headed north and worked for two years at a factory in Ontario, Canada. When the factory burned down in 1866, Muir got a job as an engineer and foreman in a carriage factory in Illinois, where he automated the machinery. Unfortunately, he was involved in a terrible accident the following year which temporarily blinded him.

When he recovered, Muir set off on a 1,000 mile walk to Florida, before sailing to California the following year. 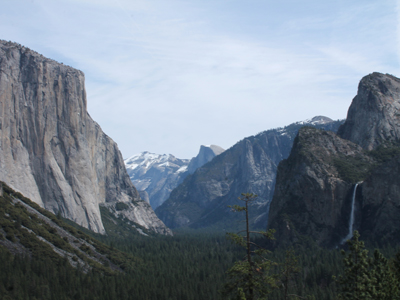 John Muir's love of nature persisted in the USA. When he arrived in San Francisco in 1868, he is said to have immediately enquired as to where to find the nearest wild place. This is how he arrived for the first time at the place to which he is most often associated – Yosemite. The region is a stunning mountainous area in the west of central California.

Muir immediately fell in love with the stunning surroundings of Yosemite. He worked as a shepherd, at a sawmill and as a guide for the tourists who were starting to travel there. He explored far and wide, camping in the backwoods and notching up the first climbs of several local mountains. He wrote a number of newspaper articles about Yosemite in these years and was even visited by the famous poet Ralph Waldo Emerson.

Muir also explored outside the boundaries of Yosemite, travelling 200 miles down the Sacramento River in a small boat, travelling around Kings Canyon, the southern Sierra and the San Gabriel Mountains. In 1879 he travelled to Alaska for the first of a number of visits throughout his lifetime. While there, he discovered two glaciers (one of which is now named after him) and named two other glaciers. The following year he went to Oregon and spent a month in Portland, giving lectures on his time in Alaska and meeting many conservationists.

In 1874, Muir met a woman named Louise Strenzel at the home of Dr and Mrs Carr, who were mutual friends. Dr Carr had been a professor of Muir's at the University of Wisconsin and Mrs Carr had been trying to set the two up for some time. She eventually succeeded and they married in 1880, later having two daughters. Muir started working on his wife's family fruit ranch.

Over time, word reached him of logging, mining and other practices which were damaging the natural landscape, and he began to write articles and travel more. He joined a campaign to protect Yosemite and wrote two articles for Century magazine entitled 'The Treasures of Yosemite' and 'Features of the Proposed Yosemite National Park', which helped raise public awareness of the campaign to the magazine's readers, which numbered more than a million. This considerably aided the cause. He would become a major part in the creation of Yosemite National Park in 1903. National Park status meant restrictions on building and commercial activities such as mining and logging, thereby contributing enormously to the preservation of the hills, mountains, trees and rivers Muir loved so much. It was a reasonable idea - Yellowstone National Park had been created in 1872 so it was certainly possible.

Everybody needs beauty as well as bread, places to play in and pray in, where nature may heal and give strength to body and soul alike.

John was still trying to run the family ranch as well fit in his travels and conservation work. His eldest sister Maggie and her husband moved to the area in 1891, followed by Muir's brother David with his family in 1892. David and their brother-in-law took much of the farm management out of John's hands, allowing him to write, travel and campaign more.

In 1892 John Muir founded the Sierra Club and served as its president until his death. The club was dedicated to conservationism and today is still going strong with 2.4 million members.

In 1893, Muir travelled to the east coast and then around Europe, visiting Scotland – including his birthplace of Dunbar – London, France, Switzerland, Italy, Norway and Ireland. On his return to the USA he campaigned for the creation of Mount Rainier National Park.

Even into his 60s and 70s, Muir continued to travel, to write and to campaign. At the age of 65 he went on a world tour, visiting Europe, Asia and even Australasia. He went to South America and joined surveys for the US Forestry Commission.

In 1906, there was a powerful and incredibly damaging earthquake in San Francisco, which caused a large fire. This in turn led to calls for the creation of a reservoir to supply the city with water, and the valley of Hetch Hetchy, in Yosemite, was identified. Hetch Hetchy was considered by many to be the equal in beauty to Yosemite Valley, which today is by far the most visited area of Yosemite National Park. John Muir and the Sierra Club led a fierce but ultimately unsuccessful campaign to save the valley from being flooded to create a reservoir. The decision to flood the valley was made in 1913 and the project was completed a decade later.

This disappointment may have still been hanging over Muir when he died of pneumonia on Christmas Eve 1914, at the age of 76.

John Muir has been called 'the father of America's National Parks'. His writings and campaigning attitude played a large part in encouraging conservation in general and especially in the establishment of several National Parks, notably Yosemite, Mount Rainier and the Grand Canyon National Parks. His impact on conservation can hardly be overstated. In 1903, Muir had persuaded President Theodore Roosevelt to go camping with him for three days in Yosemite. Roosevelt had been President for two years at this time and the two talked in depth about conservation. This experience must have played a part in Roosevelt's creation of five National Parks, 18 National Monuments and 150 National Forests during his presidency.

Visitors to Dunbar can look around Muir's birthplace between March and the end of September; it's managed by the John Muir Birthplace Trust. The site explores his life and work. Muir's home in Martinez, California, and the nine surrounding acres of land are now managed by the National Park Service as the John Muir National Historic Site, and can be visited.

Muir's life is honoured in the John Muir Way which is a 134-mile long distance footpath in Scotland, while the John Muir Trail is a 211-mile route from Yosemite Valley to Mount Whitney.

It is a fitting legacy, and one which made Muir very happy during his lifetime, that a large wood of giant redwood trees bears his name. The land was bought by William and Elizabeth Kent to protect it. They donated it to the government and President Theodore Roosevelt proclaimed it a National Monument. The president suggested naming it after William Kent, but he refused and asked that it be named after Muir instead. Muir Woods National Monument is a short drive north of San Francisco and features various walking trails from where visitors can admire the enormous trees. Muir said of it:

This is the best tree-lovers monument that could possibly be found in all the forests of the world.

A truly appropriate tribute to the great conservationist.