The Origins of Yellowstone National Park, USA Content from the guide to life, the universe and everything 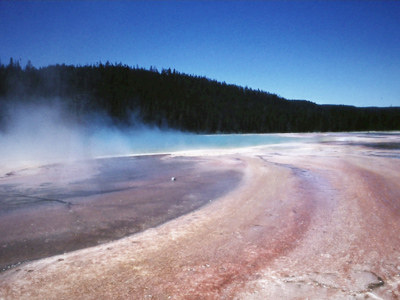 A thousand Yellowstone wonders are calling, 'Look up and down and round about you!'
- John Muir, 1898

In his book, Lost in My Own Backyard: A Walk in Yellowstone National Park, author and journalist Tim Cahill refers to Yellowstone National Park as an 'Embarrassment of Wonders'. This is a highly accurate assessment of Yellowstone's grandeur. It is one of the few places on earth where geysers shoot steam out of the landscape and mud pots bubble with flatulent noises and smells. Amateur wildlife photographers snarl traffic for miles by pulling over to take a picture of the male elk grazing by the roadside. Cars share the road with the park's famous bison. And it is likely the only place in the world where campsites are made accessible in such a way that handicapped campers can spend sleepless nights worrying about being eaten by a bear - just like any able-bodied hiker.

The park covers 2.2 million acres of forest, grassland and water. Most of it lies in Wyoming with roughly 4% extending beyond the state line into Idaho and Montana. It was established as the world's first national park in 1872, and continues to attract millions of visitors each year. The park contains natural wonders of all kinds, but also has a very rich human history, dating back to Pre-European Contact, through exploration, and finally, the formation of the park itself.

On 1 March, 1872, President Ulysses S Grant signed into existence the world's first National Park1. However, that did not mean that Yellowstone suddenly materialised as it appears today. While it was law that Yellowstone would be a National Park, the truth is that the US government hadn't a clue what it meant to have one!

At first, the only people who visited were those brave or stupid enough to make a trip out to what was then a total wilderness. In those days, taking a trip to Yellowstone National Park was more like taking a hike through the Himalayas: no highways, no ranger stations, and no one to help you if you made a fatal mistake. However, as more people survived and came back with their sensational stories, the demand for a trip to Yellowstone became greater, which led to some issues that many of the proponents of Yellowstone National Park had not anticipated.

A group of people who had anticipated these issues was the financial powerhouse Jay Cooke and Co, which had bankrolled the first official Yellowstone expedition. They also financed the Northern Pacific Railroad company, who had planned to lay track just outside the Park's northern entrance to reap any economical value that might accrue. When Hayden's government-financed expedition turned up little resources of traditional economic value (except timber) the company's interest turned to tourism. They produced paintings, photographs and books to lure the wealthy of society into the Park.

Settlers in the Montana Territory were very much disgruntled with the decision to place Yellowstone under federal care instead of their own. The prevailing view, as is still evident in the western United States today, was that the territory would develop the Park more fully, building roads and hotels to benefit their own local economy. However, the people of the eastern United States saw things differently. They believed preservation of the natural beauty of Yellowstone was more important, possibly because they had buried that of their own lands under cities and smog-producing factories.

Send In The Troops!

In 1883, President Chester Arthur took a camping tour of Yellowstone. The sudden publicity threw the predicament of the Park into the national limelight. Pieces of Yellowstone were being stripped off for personal gain, from hotels (The National Hotel at Mammoth Hot Springs in 1833, in particular) to poachers. Problems were exacerbated by a string of apathetic Park superintendents. In 1886, the Secretary of the Interior asked the US Army to place Yellowstone under military jurisdiction, which rapidly brought vandalism and poaching back under control. The Park remained under martial law until 1918. During this time, The Grand Loop, the road through the park which passes by the most spectacular features, was designed by Lt Daniel C Kingman and constructed by the US Army Corps of Engineers.

The US Army did not stop hotels from coming in, as the famous Fountain Hotel at Old Faithful was built in 1890. Nor did it bring poachers entirely under control. An 1894 survey found a poacher who had slaughtered 12 bison, bringing the total number in the Park to less than 100. The survey had travelled 300 miles in 30 days and had seen no more. This was impetus enough for Congress to pass the Lacey Act in 1894, protecting all wildlife in the Park, with the unfortunate exceptions of wolves and coyotes. This heroic effort paved the way for the recovery of the bison, and for future environmental and conservation movements.

With order now restored to Yellowstone, its popularity as a destination began to grow. In 1895, the first year that records were kept, 5,438 visitors came through the gates of the Park. Compare this with the 5,000 people who have hiked all of the Appalachian Trail since 1948. Popularity of the Park skyrocketed when President Theodore Roosevelt visited in 1903 and gave glowing reviews. The Old Faithful Inn was built during the winter of 1903/4 using native logs, and remains an extremely popular (although pricey) place to stay when visiting Yellowstone. Finally, National Geographic featured Yellowstone in 1912, cementing it in the consciousness of the world. The Park's protection was further ensured in 1916, with Woodrow Wilson's inception of the National Park Service.

The Tourism Age in Yellowstone

The first automobile to pass through the gates of the Park was a Model T Ford in 1915. Two years later, 5,000 entered during the summer season alone. By its fiftieth anniversary in 1922, Yellowstone was clearly a tourist destination. It received visits from exceedingly famous people, including a barnstorming from Charles Lindbergh in 1927. Highways were built leading to the gates, and the Park itself was expanded twice (in 1929 and 1932). A museum in the spectacular Norris Geyser Basin opened in 1930, and Yellowstone National Park Service began operation in 1947.

A 1951 study by the state of Wyoming found that the Park contributed a whopping $19 million to the local economy. This brought about Mission 66 in 1955, a programme to improve trails, roads, and facilities in the Park. Wyoming became greedy that same year, when it tried to purchase Yellowstone's concessions, but was blocked by Idaho and Montana.

After the sudden environmental awareness sweeping the nation in the 1960s and 1970s, Yellowstone National Park became less of a tourist attraction and more of a treasure. The World Conference on National Parks was held on its centenary. Because of its fantastic diversity, the Park was designated a biosphere reserve in 1976; two years later, it was listed as a UN World Heritage Site.

Disaster struck in 1988, when questionable fire management policies led to the worst blaze in Yellowstone's history. 25,000 firefighters spent $120 million trying unsuccessfully to stop flames from destroying 1.4 million acres of the Park between June and October. In the midst of the resulting political firestorm that followed, the Park had already begun to heal. In our lifetimes we are watching the forest regenerate itself, as the ghosts of old lodgepole pines fall to make room for the new wilderness.

The Republican Revolution of the 1990s brought about more issues as ultra-conservative politicians attacked the conservationist roots of their party. Their policies, whose aims are to exploit Yellowstone for economic gain, continue to be successful in blocking new funding for Yellowstone, leading to budget cuts, substandard accommodation for visitors, the closure of Norris Campground in 1996, and a backlog of uncompletable projects.

The snowmobile controversy began in these years, when studies found that emissions from snowmobiles at peak times caused air pollution levels in the park to surpass those of Los Angeles. This issue rages to date, with a growing group of committed people fighting at levels of government all the way to the White House to keep the snowmobiles at bay. More absurdities included the slaughter of 1,100 bison by the Montana Department of Livestock at the behest of ranchers, who were mistakenly informed that the bison carried the cattle disease brucellosis. None of the culled bison were tested for the disease. As a result of these poor management policies, Yellowstone was listed as a World Heritage Site in Danger in 1995.

However, there are brighter notes. Attempts to study Yellowstone's micro-organisms increased, likely due to an intensified interest in the 'extremophile' bacteria that thrive in the seemingly lifeless waters of the geysers. In 1995, wolves were re-introduced to the Park, and have since made a thrilling comeback and restored a balance among the Park's other predators, not to mention providing ample opportunity for study for wildlife biologists, both amateur and professional. In 1996, the development of a gold mine whose leaching runoff would have threatened the north-eastern quarter of the ecosystem was blocked. Three years after the park's 125th anniversary, fires broke out again in the area. However, thanks to improved fire management policies, they were far less damaging than their predecessors in 1988.