The Blue Cross Animal Charity Content from the guide to life, the universe and everything 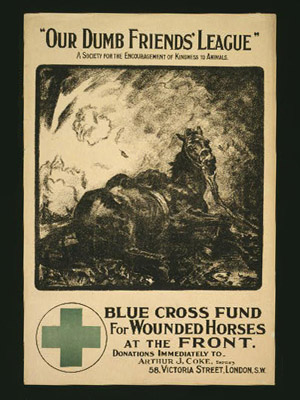 The Blue Cross Animal Charity began life as 'Our Dumb1 Friends League' in 1897; its original goal was to help working animals, chiefly horses. The organisation played an important role in looking after sick and wounded horses in the wars of the early 20th Century. Whenever a horse required medical attention on the battlefield, a white flag with a blue cross on it was raised.

The very first animal hospital was opened in Victoria, London, in 1906. Between the first and second world wars, the charity rehomed the pets of people who were moved from condemned housing to new abodes where pets were banned. During WWII, the charity looked after the pets of men and women on active service, and found new homes for those whose owners did not return. It also provided quarantine facilities for service personnel who were returning from abroad with pets.

After WWII, the horse care role changed as motor transport became prevalent and horses were no longer required. The charity took on the unwanted horses and loaned them to farms or wherever else they were needed. Our Dumb Friends League changed its name to The Blue Cross in 1950, taking the name and symbol from the flag flown on the battlefields almost half a century before.

Our family's first cat Sooty was adopted by us after her owner got a large dog to deter burglars. Sooty was very loving in return for the new home she received, but some four years later she began losing weight and clumps of fur. As a single parent on benefits I couldn't afford private Vet's fees so I took her to the local Blue Cross hospital. The Vet examined her and said they'd operate to see what was wrong, but I was asked to give written permission to have her euthanised if she had advanced cancer. I did this and turned to leave. The Vet stopped me and asked me to say goodbye to Sooty, just in case. I telephoned later and Sooty had been put to sleep as she had an inoperable tumour. I am so thankful that I got the chance to say goodbye and Sooty was given a painless death to end her suffering. I will always be grateful to the Blue Cross.
– An h2g2 Researcher

The Blue Cross provide care for the sick pets of people in the UK who cannot afford to pay for private veterinary treatment2. Approximately 50,000 consultations are made with 8,000 operations performed each year. This is done in the four Blue Cross hospitals, three of which are located in London and one in Grimsby, Lincolnshire. The people of Grimsby, Cleethorpes and the surrounding area raised £2 million to build a new animal charity care centre on Nelson Street, Grimsby. It opened in July 2005 after a two-year fundraising-drive and replaced the dilapidated old building on Cleethorpe Road, Grimsby, which had been providing free care for sick animals for 50 years. HRH Princess Anne was invited to officially open the new facility by unveiling a plaque in November 2005.

There are also four animal ambulances and one mobile clinic in the London area. In addition to this, there are two dedicated equine welfare centres which offer behavioural support. Their total capacity is 85 horses; they also monitor the health and welfare of around 350 other horses which are out on loan. The Blue Cross runs 21 adoption centres, 20 in England and one in Scotland. Animals which can be adopted include horses, ponies, dogs, cats, rabbits, hamsters and guinea pigs.

My wife and I adopted a rabbit from the Blue Cross. He is a very happy, healthy little man (he is now 4) who was taken on by the Blue Cross after his previous owner became too ill to care for him. My wife was more thoroughly involved than I was, but I believe she was put in touch with the previous owner whom she met on several occasions in order to glean information about our new arrival and keep her updated about his progress.
– An h2g2 Researcher

Unwanted, neglected, or abandoned pets are taken in by the Blue Cross, and at their 21 animal adoption centres an average 6,000 pets a year are rehomed. The Blue Cross receives no funding from the UK Government; income comes from legacies, public fundraising, personal or company donations, investments and net takings from their charity shops.

Burford is the main administration centre. The Felixstowe and Northiam centres have been identified as outdated and a new location is being sought in the Sussex and Kent areas to provide a facility with better resources.

The Blue Cross seeks to educate the general public in responsible ownership and promote the benefits of adopting a companion animal. Trained educational volunteer speakers are available to give a talk to schools, youth groups and other organisations about choosing the right pet for their family, the costs and responsibilities of pet ownership and safety around animals. A specially-trained pet bereavement volunteer can be requested to help comfort anyone who has lost a beloved animal companion.

1'Dumb' in the sense of 'unable to speak'.2There are other veterinary charities which also provide this service.3For one hour per week.