Hamster Behaviours and Breeds Content from the guide to life, the universe and everything 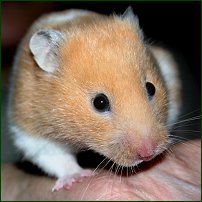 Part One of this series explained how to choose, name and home your hamster and how to keep its home clean. Part Two detailed what hamsters can eat and how best to exercise and entertain them. That covers the basics of keeping a hamster, but in this third part of the series you can learn how to develop a more lasting relationship with your hamster and how to understand its individual personality and behaviour.

Did you know that your hamster will talk to you? They do. Hamsters have a variety of communication tools including 'piffing', squeaking, whistling and various other noises (some of which you may be unable to hear), as well as facial expressions and body language. Hamsters will use different methods to say the same things, although you may find that within a group of hamsters living in the same household, a 'standardised' set of noises and actions develops which each hamster uses to mean the same thing.

While it is hard to get to know what your hamster is saying, it helps to know the kind of thing they are likely to want to say. In general, hamsters are likely to want to gain your attention, ask you to do something for them or to tell you that they are unwell, in pain, frightened or distressed. The only way to learn what your individual hamster is communicating to you is to watch, be patient and experiment.

Nose-rubbing is an important tool in hamster social interaction. Don't be afraid if your hamster goes for your face — he or she may well just be trying to nose-rub and say hello. Rubbing around your neck, especially under the ears, is their way of picking up your scent and marking you with theirs. All this is important in building a close bond with your hamster. Hamsters socialise in a variety of ways. They may try to look after you — especially females, who can treat you like a baby hamster. Unfortunately, this can be mistaken for biting. Mothers often nip their babies as a means of discipline and adults will use the same method on you — to complain that you are holding them incorrectly, for example. This will not break the skin, though.

Grooming is also an important social ritual for hamsters and, although they are trying to be friendly by grooming you, hamsters often fail to take account of your lack of fur and cause more pain or damage than they intend. If a hamster genuinely intends to bite, probably because it has been frightened or hurt, it will break the skin and cause serious pain. You may even need a couple of stitches! They will only do this if you provoke them, though, so just make sure you never do. Your hamster is a contradiction on four paws: they are solitary, but love company!

Other Breeds of Hamster

Not ideal for a first pet, dwarfs are for the hardened hamster fancier who wants to branch out into the 'fancy' realm. Although you can rarely cuddle them, they can still provide all the aforementioned enjoyment and bonding opportunities. The following varieties can be kept in pairs:

These can be kept in male or female pairs, but do not pair brother and sister hamsters. They will mate and you don't want inbreeding or fighting. When choosing pairs, start as you would when choosing a single — let the hamster that loves you choose you. Then, let them tell you who they want for their living companion; do not for them. This is a little different with male-female pairs. Get two of the same breed at the same age (ideally four weeks old) from the same pet shop, but from different litters.

Do not put them together immediately. Set up a large tank, at least two feet long and one foot high. Separate it in half down the middle with a piece of net with dowels on the top and bottom and down the sides, held together with tape. This allows them to be close without fighting. After seven days, they should be cuddling up to each other against the netting and trying to groom each other through it. Remove the net, but do not leave them unattended! Make sure it is a day when you don't have to go anywhere or do anything. Stay with them all day. If there is no fighting, exhale. If they fight, have icy water on standby. Douse them, separate them, put the net back and try again in two days. Keep up this process until they are happy with each other. Do not be surprised if, every now and then, you have four dwarfs instead of two. To control dwarf numbers, control the living space. They will not overpopulate their environment.

Russian Dwarfs are best kept apart. They will fight, and it will definitely be to the death, followed by decapitation. Keep them in large tanks with bucketloads of wood shavings and follow the hamster dietary needs and training outlined in Parts One and Two. These little guys, although they go like stink (and poo on you every time you give them a cuddle, because they get overexcited) can be cuddled and played with, but very, very carefully.