Keeping Guinea Pigs as Pets Content from the guide to life, the universe and everything 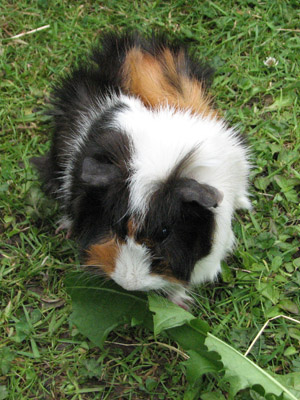 Also known as Cavies, guinea pigs are often mistaken for hamsters, but they make great pets no matter what you call them. They are easy to look after, they don't bite or scratch and they are very clean and odourless. They are awake during the day so there is more to see than just a sleeping ball of fur. Guinea pigs don't actually do very much; they won't run in a wheel or fetch a ball. But they will repay careful handling with a purr and will greet their owners with a deafening 'neep'.

Just to clear this point up, it is worth explaining the differences between hamsters and guinea pigs. While a hamster looks like a furry mouse with no tail, a guinea pig is much bigger; it has a giant rounded nose and its legs are hidden underneath it, so it looks like an elongated mop or a furry bread roll with eyes.

The two animals are quite different in temperament as well. Hamsters are highly active, but only at night. They are solitary creatures and like to be alone. They don't mind being handled but will bite hard when they are cross. Guinea-pigs on the other hand sleep at night and are active during the day, although not very active, and are very calm and placid. They enjoy company and should be kept with other guinea pigs.

Where to keep your Guinea Pig

Whether it is indoors or outdoors, you'll need somewhere to keep your pet.

If the weather's OK (ie, not pouring with rain, or too cold) put them out in the garden, if you have one. It is not wise to let them run loose, as guinea pigs are small and the chances are very high you will lose them or they will escape. There is also the danger of them being attacked by dogs, cats or foxes. Guinea pig babies may be attacked by crows or magpies.

The ideal is to use a pen, like a rabbit run. This is a sturdy enclosure protected on all sides and above by wire meshing, with holes small enough to stop birds from getting through. Some of these pens come with mesh across the bottom as well. You should remove this, as it will damage their feet.

You should put a water bottle or container out in the pen with them and make sure it is filled with fresh clean water each day.

You will need a hutch to keep them in during the night. These can be bought in pet shops or you can build one yourself if you're handy enough. If the interior is quite a lot bigger than the pig then it's a good idea to have a separate bedroom, so that it will retain more body heat on cold nights.

Line the floors with old newspaper to absorb urine, and the walls and floor of the bedroom with hay. Some people like to put in a clutch of hay and then make a burrow into it with your hand. If you don't, the guinea pig will do this anyway. You will need to change the bedding, which is made up of paper and hay, at least once a week. They're not house-trained!

The hutch will also need a food container, a water bottle, and a salt lick.

How much space does a guinea pig need?

Guinea pigs start out small, but they do grow, so you should give them plenty of living space right from the start. The easy way to work out the size of the hutch is to multiply the number of pigs by two and then add two. This gives the number of square feet of floor space you need in your hutch. So to house three guinea pigs, you need 8 square feet. A hutch of 4 feet by 2 feet should be big enough.

Even this is a bit cramped if the pig is never let out of the hutch. If you have a garden, you should put your pigs out on the lawn (in a suitable enclosure) as often as possible, as they like grass. If you live in an apartment and have no way of putting the pigs out, you should let them wander around the kitchen. If you are unable to allow them even this small freedom, you'll probably need a bigger hutch: multiply the number of pigs by 2.5, then add five. This will give you the number of square feet you will need in the hutch. So for example, three pigs will need 12.5 square feet.

Guinea pigs are social creatures. They like to live in large communities and will be very sad if left on their own. So you should never keep just one piggy. Just how many you keep depends on whether you want to breed them or not. If you decide you don't want to breed guinea pigs, you should settle on either males or females and not attempt to mix them.

One male and as many females as you like will get on together, but there will be babies. Male babies are able to mate with any females, including their own mother, from about 6 weeks old, so you must separate them before then. Before getting into the business of breeding guinea pigs, think about what you are going to do with the babies. Your local pet shop may be willing to take them off your hands, but in some countries regulations make this difficult, so you may find you have to search for homes for them yourself. If in doubt, it is better not to breed, as there are enough unwanted pets in the world.

Two males can be brought up happily together as long as they've been together since they were young, but if there are more than two, they will fight. If one of your male guinea pigs dies, you should be wary of introducing a new young male, as the old male may not get on with him.

You can put as many females as you like together, as long as you've got the space. One pig will probably become dominant and will behave like a male, always grabbing the food first, possibly nipping the other pigs or even acting like she is mating with them. This is just to establish who's boss, and will not usually result in any harm. You can introduce a new baby female into the group without any danger.

You can buy dry food for them from pet shops - it's like rabbit food. They also need some fruit pretty much every day - an apple or carrot will do nicely. They like to eat anything green, such as lettuce, cabbage, broccoli stalks, grass or especially dandelion leaves. They will nibble on hay if there is no grass, so you should always make sure there is plenty of clean hay in the hutch. Also, guinea pigs love eating rose petals.

Your pig will need a plentiful supply of water. You should include a drinking bottle in the enclosure. You can use a bowl of water, but the guinea pig will probably dirty it, so bottles are better.

You'll need to clip your guinea pig's toenails every now and then, when they're getting too long. Normal nail-clippers will do the trick. Be very careful when doing this not to cut all that much, because it's often hard to tell where the nail ends and the toe begins.

You don't need to wash your piggies - they can look after themselves in that regard. But it is good to brush them.

Check your guinea pig's fur regularly. If it seems to be falling out in clumps, the pig might be suffering from mites or from a fungal infection. A trip to the vet is in order. Your vet can give the guinea pig an injection which makes him resistant to these problems.

Guinea pigs are reasonably active animals. Some are quite keen on climbing and clambering. You could put out some bark or something for them to climb over and some branches for them to hide under, although this will make it harder to catch them.

A guinea pig should live for about five to eight years. If they are kept in warm, dry conditions they are likely to live a bit longer.

You can pick up a guinea pig by holding it around its shoulders from on top with one hand, then putting your other hand under its behind. Be careful: the pig may decide to kick against your hand and jump. Never let your guinea pig jump, as their legs are quite fragile and easily broken. Once you have the pig in the air, you can place it on your forearm against your chest, where it will snuggle happily.

Guinea pigs are friendly creatures and enjoy being handled, but it is sometimes hard to believe this. Because the pig in the wild is the prey of many large predators, it looks after itself by running away when it can. This means that your piggies will always run when you try and catch them. Once you have them, however, they are usually quite happy to be held gently and stroked.

When you get a new guinea pig, you might like to leave it alone for a day or two to let it get used to its new home, but after that you should handle your piggy every day so that it will be used to it. Some authorities say that a guinea pig needs to be held for up to an hour a day. The best way is to put a towel on your lap and hold the piggy there, stroking it gently.

If you squeeze your pig too hard, it may nip you. This is not a common occurrence; guinea pig have been known to bite when mistreated, but they are not vicious. They will rarely bite hard in the way that a hamster might.