Gerald the Pornographic Elephant and his 'Groupies' Content from the guide to life, the universe and everything 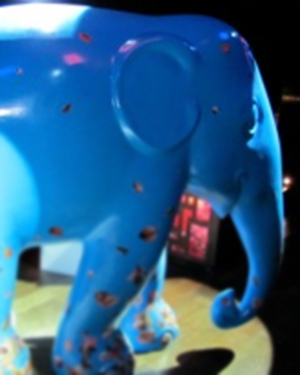 Gerald. Who is he? And who are the Groupies? Why should you care? Before tackling those questions, let's get a little background.

In 2010, London was invaded by a herd of baby elephants. These were life-sized fibreglass models of baby elephants in different poses, which were given to artists to be painted in colours and styles of their choosing. The elephants were put on display in various places around London for a time, then they were sold at auction. Funds were also raised by the sale of elephant copies, T-shirts and parade books. The money raised from the London 2010 Elephant Parade went to several elephant-related charities, including Elephant Family, founded by Mark Shand. This charity is dedicated to the protection of habitat, prevention of conflict and reconnection of the disparate isolated herds of the Asian elephant. They provide funding to local conservation charities in Asia who are helping the Asian elephants to survive.

London's elephants were placed on many sites throughout the city and not always at public attractions. The event extended from Westfield, Shepherds' Bush in the West, to Greenwich in the East, and St Pancras in the North to Brixton in the South, displaying 256 decorated, fibreglass baby elephants. The attraction ran from May to July 2010 and drew an audience of around 25 million people, many attempting to locate them using a (slightly inaccurate) map supplied by Elephant Parade. It also created over 500 press articles (more on that later) and 10 hours of media air time, but most importantly, raised £4.5m for Asia-based conservation charities.

One of these elephants was Cloudia, the roaming promotional elephant. She turned up at venues such as St Pancras, Greenwich, Westfield, More London2, etc, as well as being used for promotional photo-shoots. No one knew how long she'd stay at each venue before disappearing and reappearing at a different, unannounced venue. Thankfully, Elephant Parade had their own link on a well-known social networking site that posted information on where to find elephants which were not where the map originally indicated, and, more importantly, that gave updates on Cloudia's latest location.

So who is Gerald? Why is he so special? Because he caused a scandal, that's why. Read on...

Selfridge's, a very reputable department store in London, had six elephants booked to appear, with one, 'Gerald', being shown on the ground floor, close to the staff entrance. It was designed and painted by Jonathan Yeo, son of former Conservative minister, Tim Yeo. A controversial artist, famous for creating a portrait of George W Bush made entirely of pornographic images, he created Gerald, a blue elephant (maybe that was a clue?) decorated with falling leaves collecting around his feet. After a number of complaints, Gerald was withdrawn from view – it had been noted that the 'leaves' were actually explicit photographs of part of the female anatomy.

Enter Petra Jirušová who, using the social network site, started a 'Free Gerald' campaign. She and others felt that as Gerald was an artwork included in the Elephant Parade, there must be somewhere to display him. The site and Petra gained media attention highlighting the 'abduction' of Gerald. Eventually Gerald was made available to view at Elephant's HQ in Gower Street, before Chinawhite, a night club, in Greek Street, Soho, London, put him on display, with daily viewings between 13.00 and 14.00 over a two-week period, attracting up to 200 visitors an hour. It was a welcome reprieve.

Gerald's Groupies? Who are They?

During the parade, there had been a real feeling of camaraderie and friendship (with a few exceptions and upsets, unfortunately), among tourists and locals alike, explaining the reason for the event, pointing out where elephants were, discussing which elephants had been seen, but mainly just appreciating the event. At the end of the parade, the elephants were displayed for one last time before they were auctioned3. Those that were too delicate for outside showing were put on display at Westfield, London, while the rest were displayed at the Royal Hospital, Chelsea, London. That is, all except Gerald.

Neal Rollason remembered how Researchers of the h2g2 website held 'Meets' enabling researchers to meet in real life. He arranged for like-minded Elephant Parade followers to meet at the Duke of York Barracks, Chelsea, at 11.00 on Saturday 26 June, 2010 to view the massed elephants one last time and to get together with each other. There were 14 attendees: Louise Marston, Silas Potts, Debra Wells, Neal Rollason, Valerie Mel Glaranz, Maan Barua, Paul Shinn4, Jim Ware, Matt Allen, Cristina Capella, Claire Morphett, Petra Jirušová, Catherine Rowley and Sarah Barker5.

Subsequently, the group attended a special promotion event laid on by the town of Clonakilty, Ireland. This was at the Porterhouse, Covent Garden, and was attended not only by the Mayor of Clonakilty but also by 'Clonakilty Irish Elephant' itself. The Mayor was really kind and gave each member of the group a gift. Debra Wells won the raffle, a gold-plated 75-cm-high elephant, now named Gold Leaf. After decamping to the Coalhole, Strand, it was decided that the group should continue, but needed a name, and so Gerald's Groupies were formed. They are also affectionately known as the GGs6. Since then, they have visited Bath to view fibreglass lions, Chester for rhinos, Newport for dragons and Hull for the Larkin toads, as well as meeting monthly to discuss future events and photographic excursions, but mainly to maintain personal contact, promote the plight of the Asian elephant and enjoy outdoor photography. It should be noted that Debra Wells also excelled by partaking in the 10.10.10 Royal Parks half marathon for Elephant Parade, at which a number of the GGs attended to give moral and vocal support, as well as 'refreshment' afterwards. She also arranged a venue for the end-of-year get-together which was appreciated by all who attended.

And the GGs' Next Major Event?

Since this article was written, seven of the GGs visited Copenhagen in July 2011, to see the 102 elephants on display in the City.

But who knows what their next big adventure will be? Maybe the Elephant Jungle in Edinburgh in August 2011? Or maybe they'll even have their own Elephant design at a future Parade?

1This is the original figure. Two more were added to this collection later: one at the final parade in Chelsea for the auction and another at the Glastonbury Festival which was, unfortunately for 'hunters', only viewable by attendees.2More London is a building complex on the banks of the Thames, between London Bridge Station and County Hall, incorporating Hay's Galleria.3The elephants raised a total of £4.5 million at auction, a record for an Elephant Parade.4A cartoonist who kindly created a cartoon especially for the group.5The other members of the Groupies, who were not at the original meeting, are Michelle Lee, Nell Muller, Sarah Pickering, James Rosen, Neil Rosen, Tracy Rosen, Jo Sarsam, and Emma Valletta.6At the time of writing, the GGs are a closed group, with no new members being invited.