Survivalism Content from the guide to life, the universe and everything 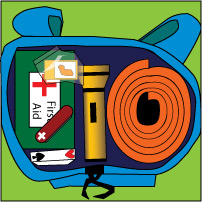 Survivalism as a concept has been turned into a stereotype of people sitting in concrete bunkers, awaiting the end of the world. Though there are indeed many people who are content to spend their lives doing this, the concept of survivalism does in fact encompasses many different ideals and methods. A survivalist can be defined as:

One who has personal or group survival as a primary goal in the face of difficulty, opposition, and especially the threat of natural catastrophe, nuclear war, or societal collapse.

The first recognised survivalist was Howard J. Ruff who published 'Famine and Survival in America' in 1974. This book was a product of the inflation in the United States, brought upon by the oil crisis in 1973.

He pioneered many widely accepted ideas on survivalism, including the stockpiling of food and water in the case of sociological collapse. He predicted that if governments would cease to function, then due to the centralised nature of western capitalism, the free market economy would similarly grind to a halt. In the case of such economic stagnancy he suggested the investment in precious metals, such as gold and silver, which he considered would have intrinsic value and be accepted as worth something by the majority of people. Many post-modern survivalists would consider his work to be essential in establishing a firm foundation in the subject.

Another well-known group of survivalists were the people now dubbed as the Y2K Survivalists. This group believed that some sort of doomsday scenario was going to occur at the turn of the millennium. Though now considered verging on paranoid or hysterical, this was a real concern to many before the year 2000 and many stockpiled food and crouched in bomb shelters to see the new year in. The idea behind their worry was that many computer systems were then designed under a 100 year cycle, so as the new century came in, many computers would reset their dates to the year 1900. Under these circumstances, it was not known what the computers would do, but many feared a Judgement Day scenario, where nuclear warheads automatically launched themselves, plunging the world into nuclear winter. One can see why they were a little edgy.

Survivalism doesn't have to be only something for the freaks and the paranoid. A successful hitchhiker would indeed have many traits of a Difficulty Survivalist in any case. The following items are things which should be considered as essential items to be carried around at all times, and used in the case of emergency.

There is also an excellent h2g2 entry, How to Make a Basic First Aid Kit for the Home, which contains some useful and relevant advice.

There are many different situations in which you may need survival skills. These situations can be divided into three separate types of situation.

This can be where a normal outing turns out to be quite different. You may find yourself in hostile territory, or quite simply get lost. If this does, or is likely to apply to you, then it would be advisable to follow the instructions under the Difficulty Survivalism section below. In most situations this simple step-by-step plan should be followed.

In the case of an accident and either you or one of your party is injured, the most important thing for you to remember is that unless help is readily available, under no circumstances should that person be left alone while the other person goes for help. This decreases the chances of their survival dramatically.

In this instance the general rule of thumb is to get as far away from the volcano as possible. Lava flows can be incredibly fast, and if you are on the side of the volcano then you should not expect to 'out-run' the lava, even if you have a vehicle to hand.

One of the greatest dangers in a volcanic eruption is the inhalation of ash. To prevent this you should cover your nose and mouth with some sort of cloth at all times. You should not attempt to drive through heavily falling ash and certainly not fly through it, as ash can clog up internal combustion engines, preventing them from running.

The responses to a tsunami differ as to how much warning you are given. If you have a lot of warning then you should attempt to drive as far from the coast as possible. If you are in a boat and cannot get to the coast in time then it is safer to sail out to sea. Tsunami, unlike tidal waves will only become an over-water wave once the sea level drops and they come up into coastal areas; if you sail out into deeper waters then the wave may go under you.

If you do not have time to leave coastal areas then you should find a strong, tall building and take the stairs to the highest level you are able to. Do not attempt to use the elevator, because the tsunami may cut power even before it hits your coastline as it can hit different areas at different times.

Most deaths in an earthquake occur when people are crushed by buildings, and not in holes opening up in the ground. Because of this, in the case of an earthquake you should get as far away from buildings as possible. If you are in a building then you should move to the centre of the room because walls may collapse.

As has been shown in the above definition, survivalism is not merely a fringe group of society, but a way of life. The following motives for survivalism are listed in order of extremity.

Perhaps the most common motive for survivalism, difficulty survivalists would encompass all people who go to the extreme of saving for a rainy day. Many of these would continually keep a basic survival kit (such as the one shown above) on them at all times.

Despite its seemingly commonplace nature, this is perhaps the most important of the motives for survivalism. In the past one hundred years or so Western culture has become increasingly consumerist, and therefore is designed to cushion people and so life becomes more pleasurable or 'luxurious'. In this technological age, many of these luxuries have become standardised so we do not need to know how items work, we merely need to know how to operate them. This has led to a dangerous growth in incompetence when it comes to living without the basic luxuries. For people such as this, the study and practice of survivalism is essential as many wouldn't know where to start in the case of a natural disaster or collapse of society.

This, like the motive below may be coupled with some sort of sense of paranoia. But as the saying goes, just because I'm paranoid, doesn't mean it isn't true. Opposition survivalists hold a fundamental belief that there is a group (be it a government, ethnic race, alien race, company, commune of badgers etc.) that bears them ill will. Because of this they will perhaps ostracise themselves from society in order to escape the watchful eye of this group.

As was shown in the above definition, this motive can take various forms, be it political, religious, sociological or ecological. These survivalists are generally on the most extreme end of survivalism, stockpiling things such as food, water and weapons. This can, in some cases be because of some sort of delusional psychological disorder on the part of the survivalist in question. However, many of these survivalists have just as many marbles as advertised. They merely have a fundamental belief that the world as we know it is going to end, and are therefore being prepared. Whether this is delusion or foresight, only time will tell.

Though survivalism has been dubbed as one of the freakish tendencies of the paranoid, they do have something to teach us. Though such a thing seems alien to us, society can collapse under itself. Look at the Roman Empire, for example. Perhaps this is a case where it is indeed better to be safe than to be sorry. Indeed, as the Scouts said, 'be prepared'.

There are a series of survival-related entries on h2g2, including: