How to Survive in the Wilderness of the Pacific Northwestern United States Content from the guide to life, the universe and everything 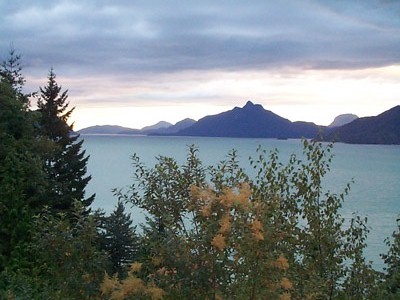 So, you're down and out in the Pacific Northwest, which pretty much encompasses everything from midwestern Montana to the coast of Oregon and north through the lower Canadian provinces. It's a fairly large geographical region, sparsely populated, and typified by either wide, rolling plains or extremely adverse mountainous terrain, and what isn't one or the other is covered with lots and lots of evergreen trees. Getting stuck in the pine forests isn't that much of a hardship, though. It's worse being trapped on the open plains, where there is little or no cover, wildlife, or foliage to subsist on. If you do get stuck in the fields, try to get near the lee side of a hill (downwind), and dig yourself a hole of some sort to hunker down in. It beats freezing to death in the wind. When you can, make for a copse of trees or a rock formation for some shelter.

Two of your most important priorities are going to be shelter and fire. Especially in North America, the days can be chilly and the nights frigid and moist, even in summer. Part of the problem is due to the elevation, partly due to northern latitude, and partly due to the odd nature of the weather in the region. Severe snowstorms as late as April are not unseen, as are rainstorms up to squall-size throughout the year. In the winter months, temperatures can easily reach as much as -15°Celsius. Fortunately, there is a variety of indigenous animals and plants that are readily edible, as well as plenty of relatively fresh mountain streams. Sustenance won't be a problem.

Available fuels for starting a fire include dried leaves, bark from various trees, twigs, deadfalls, and 'witch's hair', a kind of spongy green moss common on the upper branches of pine trees. A main point to remember is that forests can be surprisingly moist and damp, so drying tinder is critical. Take a look at The Bow Drill - Fire without Matches for additional information and an excellent guide to using a bow drill.

The best shelters for the area are any of the lean-to variations or, if you're feeling really creative, tree house styles. If properly explored, caves make for excellent shelters in the area. Be careful though, as bears, skunks, and other indigenous creatures may already have a home there. A nifty trick that works quite well is to put pine boughs down where you intend to sleep. Get a lot of the wide, fan-shaped ones and place them thickly on top of one another. They form a wonderfully springy mattress and help elevate you off the ground, which is admittedly very cold at night. The other trick with pine boughs is spread them on top of your lean-to, the 'open' part facing downwards, with the base of the bough aimed upwards. If you put enough of them on top of one another, layering them like roofing tiles (stacking from the bottom to the top), it creates an almost watertight roof.

Further information on shelter-building can be found at Building a Debris Shelter in the Style of a Squirrel and Digging a Snow Shelter.

There are a good deal of small game animals such as pheasants, quail, rabbits, and groundchucks. Slightly larger game includes coyote, small deer, and foxes. Larger game that you will not wish to hunt without either a good bow or firearm include elk, moose, and larger buck deer. There are two varieties of snake to watch out for, the cottonmouth and the diamondback rattlesnake. Rattlesnakes have a distinctive-sounding rattle on their tail that shakes when annoyed, and cottonmouths are a dusky brown-tan in colour, with white mouths. There aren't any terribly dangerous insects to watch out for besides the brown recluse and black widow spiders. Animal-wise, be wary of skunks. The major predators in the area are cougars and bears, both of which have been known to prey on humans. Cougars are a very large kind of feline. If confronted, try to act large and make a great deal of noise. Hit them in the eyes and throat if they attack you.

There are several minor sources of plant nutrition in the area, though not enough for a human to subsist on easily. A variety of wild spinach that grows in moist ground in batches of three spade-shaped leaves, usually only six inches or so high, is the most common kind of wild plant that is safe to eat, along with the occasional wild strawberry or blackberry patch. By and large, however, there is not enough food in a square mile for a human to forage for at a productive rate.

This information should give you a basic look into surviving in the Pacific Northwest. Again, use the Basic Survival Guide for help. Think creatively and stick near your shelter and fire. The biggest dangers are the cold air and the predators in the area, who will in all likelihood be scared off by a torch and plenty of loud noise.