The Storegga Tsunamis Content from the guide to life, the universe and everything 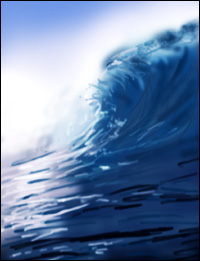 Imagine walking along the coast of eastern Scotland, when suddenly the sea rapidly retreats - like a low tide but much more pronounced. All around, fish are left slithering, gasping for air and writhing on the sand, such is the speed of the water's retreat. You stay for a while, pondering this phenomenon, when from the distance comes a roaring sound. Looking north, you see a gigantic wall of water approaching. Where it crashes into the coast there is a terrific noise, as if whole swathes of land are being ripped away in one sudden movement. It grows louder and louder until deafening in its intensity. Suddenly the water is rushing towards you, shoving rocks and trees ahead as if they were children's toys.

Calamities of this sort, particularly when attributed to the UK, seem sensational - fictional even. Surely they couldn't possibly happen in this part of the world... However, such an event did occur a long time ago and there is scientific evidence to suggest that it could occur again in the future.

Around 7,500 years ago, two enormous disturbances1 occurred at sea between Norway and Scotland in a region known today as the Storegga area. Huge sections of the continental shelf2 fell away, affecting an underwater region of 88,000 square kilometres - similar in size to mainland Scotland itself. In each case it is believed that an earthquake may have triggered the slides and that an explosive release of methane from gas-hydrates3 greatly amplified the collapse. Huge amounts of energy were transferred into the sea water itself, resulting in two separate tsunamis of gargantuan proportions.

A tsunami4 is a wave that occurs infrequently around the world as a result of massive disturbances at sea - earthquakes, landslides, volcanic eruptions, or meteorite strikes. Tsunamis are deceptive; in deep sea they propagate very quickly through the water while not reaching any significant height. However, it is when the waves hit the continental margins that the real fun begins. The waves slow down, but in order to maintain energy their height increases dramatically. By the time the waves hit land they may be several metres high. Tsunamis have been known to travel all the way across oceans, causing damage thousands of kilometres away from the point of origin.

Such was the effect of the Storegga tsunamis. Huge waves radiated from the slide area, first hitting the west coast of Norway with unimaginable force, then in short order the Shetland Islands, the Faroe Islands, Orkney, Northern Scotland and Iceland. Evidence suggests that the waves reached as far south as Eastern England, which was fully connected to the European mainland at that time. The cataclysms wreaked an enormous trail of destruction, with waves at least 10m high in many places.

How do we know?

Even though these tsunamis happened a long time ago, studies in different locations along the North Sea coast prove they did indeed occur. The weight of the ice sheets during the last Ice Age, changed the coastline considerably. For example much of Scotland and Scandinavia was flattened. Since then, the land has been rising gently back to its original position; resulting in raised beaches in many coastal areas. Naturalists discovered unexpected layers of sand and marine sediment within peat layers in these raised beds. And detailed analysis confirmed that the sediment was deposited rapidly. Radiocarbon dating was able to date these layers to around 7,500 years ago, and differences in the layers confirmed that at least two separate events occurred during this period. There is also evidence that human lives may have been lost in the cataclysms, as at least two stone-age settlements have been found just under the sand layers along the Norwegian and Scottish coasts5. Even more remarkable is that older layers of rapid sea inundations were discovered, dating back 30,000 years, meaning the Storegga tsunamis were not isolated occurrences.

The Storegga incidents give our present age some cause for concern. Firstly, they indicate that north-western Europe is not immune from major disasters and tsunamis may happen again despite it being one of the most geologically stable areas on the planet. Early-warning disaster systems, such as those that exist in Japan, may not be such a bad idea given the number of people who would be affected were it to happen. Secondly, even though few people would see a recurrence as imminent, the very fact that it might occur in the future should have a bearing on major planning decisions, such as the positioning of nuclear power stations and toxic waste facilities. A third concern is that we don't yet know enough about the causes of the tsunamis at a time when gas and oil-drilling6 is about to start in the very same region as the Storegga disaster.

1The incidents were separated in time, possibly by some years.2For more information about plate movements, see the entry on plate tectonics.3Solid crystals formed by methane and water under pressure.4The name comes from Japanese and means Harbour Wave.5On the island of Fjørtoft (S Bondevik, 2003), and in Inverness (A Dawson, 1990).6In the Ormen Lange region.