The Language of Coastal Projections Content from the guide to life, the universe and everything 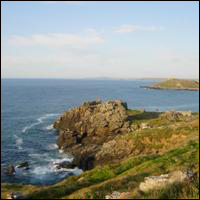 Somebody once said that Eskimos have 50 different words for 'snow'. Whether or not it's true - and people with far too much time on their hands have argued the toss for years1 - it serves to illustrate that languages can have an unexpectedly large vocabulary for describing certain things which are important or prevalent in those respective cultures.

Indeed, we non-Eskimos are not immune to a bit of verbosity ourselves. It's quite possible that we too have 50 words in our own language to describe what is essentially the same thing. This Entry seeks to discover whether such an item exists, and examines the vocabulary behind one particular geographical feature - the coastal projection.

Those of us living in the UK inhabit a cluster of around 200 islands, with a coastline which is surprisingly crinkly in shape. We don't recommend you try it, but if you were to stretch it out, it has been estimated to be around 20,000 miles long, the figure varying according to the scale with which you measure it2. It contains many fascinating physical features, notably those bits of it which stick out into the sea at various points. Being a proud seafaring nation, Britons have identified many of these as navigational markers and have named them. In fact, we describe these coastal projections using a remarkably wide range of terms. Not only does the English language have many local and regional variations, it has adopted many terms from Celtic languages and elsewhere.

One of the most definitive words is a promontory. Deriving from Latin words indicating that it's a projecting part of a mountain, this is the word for a high piece of land which juts out into the sea. It's not quite the same as a cliff – an Old English word – as the latter is generally just high and perpendicular, but 'cliff' can carry the sense of being overhanging, so we'll also include it in our list of projections. Bluff is a North American alternative for the same thing.

A better word is headland – unmistakably high and pointy – or foreland, which has a similar meaning. The daddy of them all, however, has to be a cape. Britain has only two of these: Cape Wrath (in north-west Scotland) and Cape Cornwall (in south-west England). A cape often implies a point on the coast where two seas meet, and evokes an image of swirling currents forcing unwary sailors onto treacherous rocks.

Less common is a pinnacle. More commonly used for a mountain peak, this can also be used in the sense of a rocky promontory.

Another similar word for a lofty sticky-out piece of land is a head, which is most commonly seen in place-names like Beachy Head and Flamborough Head. Oddly, it's one of many words we use in this sense which are also parts of the body. In years gone by we used arm, and we still use neck, finger (more figuratively) and tongue – the latter often signifies a narrow piece of land between two river mouths. It's not just human anatomy either. The pointiness of a bird's bill has led to place-names like Portland Bill and Selsey Bill.

The word naze, as we see in the Essex town of Walton-on-the-Naze, has a similar root to the word 'nose'. It probably came to Britain with the Vikings, and similarly-derived placenames such as Lindesnaes exist in Norway. The word is related to the better-known ness, an Old English word, as we find in Orford Ness in Suffolk or Tarbat Ness in the Moray Firth. Interestingly, Loch Ness is unrelated – the River Ness derives from the Celtic root ned, meaning 'moist'.

A languet, from the French for 'little tongue', describes any of a number of tongue-shaped objects, including a projecting piece of land.

Some inanimate pointy things have also given their names to the cause, not least the point, one of the most common words for a coastal projection. Another is hook, used for an angular point or corner, perhaps best known in the Hook of Holland (or Hoek van Holland), the site of a ferry terminal near Rotterdam. Less commonly used is a horn, but this has an interesting connection to the Latin equivalent cornu, which is the likely derivation of the name of England's pointiest county, Cornwall.

The cooking utensil spit gave its name to a lower projection of land, often formed of sand or gravel, and other words for these more temporary projections include sandbank, bar, shoal, reef and ayre.

In the sense of something which extends outwards, we occasionally use the word reach, but this is more commonly used for river bends, especially those in North America. Finally, we once used the word butt for coastal projections, in the sense of it meaning 'to jut out', but it only lives on today in a few names, such as the Butt of Lewis.

Some of the above words, including the naze and the ness, generally describe substantial areas of land rather than rocky projections, and alternative words for these include the generic term peninsula (from the Latin for 'almost island'). A more poetic term is chersonese, the Greek for 'peninsula', originally used specifically to refer to the peninsula of Gallipoli, the one lying to the west of the Dardanelles.

Paul McCartney famously once sat on a stile and strummed a guitar as he sang about the Mull of Kintyre – a remote and peaceful spot, largely deserted apart from the occasional massed pipe band marching along the foreshore. Mull is another word for a headland, deriving from the Gaelic3  maol. If you travel more widely through the nooks and crannies of the Scottish islands, you may also come across coastal promontories described with words such as carraig, ceann, cleit, corran, creag, dòirlinn, gob, rinn, ros, rubha, soc and sròn.

Then we get the Scandinavian influences, such as skaw, as seen in the Skaw of Unst, and noup, as in the bird sanctuary the Noup of Noss, both in Shetland. Odd is another Scandinavia-sourced word for a point, living on in the place-name Greenodd in Cumbria.

Gone But Not Forgotten

Language evolves and adapts over the centuries, and many of the words we once used for promontories have faded into obsolescence. Nook was widely used up to the 16th Century, in the sense of it being a corner of land. The northern dialectal word snook may derive from the same source.

Sir Francis Drake famously played bowls on Plymouth Hoe as the Spanish Armada approached in 1588, and the word hoe was once used to describe a raised promontory or ridge, including the ones which stretch into the sea. Likewise, we once used angle and also cantle to describe a projecting corner of land. Having a similar meaning is gore, which comes from an Old English word for a spear-head.

A fare is a promontory marked by a lighthouse, especially the one in Sicily at the entrance to the Strait of Messina. The word comes from the Greek pharos. If you live in the English West Country, then you may still hear a hilly promontory with a coastguard look-out referred to as a toot.

Are We There Yet?

That's 53 words so far, so we've clearly reached our target. It's not an exhaustive list either. There may well be more words out there, and we could easily extend our list by using some of the more poetic alternative forms. Promontory has three: promont, promontore and promontorium. Similarly, penisle is an alternative for 'peninsula'.

Other words have alternative spellings: nese for ness, and tote for toot, for example.

We might also have included man-made projections; all kinds of breakwaters, piers and jetties should be good for another 10-20 words.

In the end, this all goes to show that it's not that difficult to uncover a bit of verbosity, when armed with a large dictionary and, in this case, a few maps. Like the Eskimo snow-words, promontories are not all identical and imply subtle differences in meaning: high rocky promontories and shingle spits are very different, even if they both appear as similar points on a map.

This exercise also shows how the English language has managed to absorb and retain many of the regional and dialectal words arising from over 1,000 years of history. The next time you come across an unusually-named coastal feature, take a few minutes to appreciate why it was named that way. You may learn a little bit of history, too.

1If you're interested, The Great Eskimo Vocabulary Hoax, written by the linguist Geoffrey K Pullum, runs to 236 pages.2Mathematician Benoit Mandelbrot showed in 1967 that the shape of Britain's coastline behaves like a fractal curve, and that while the area of the landmass contained within is finite, its actual length is infinite – a result known as the coastline paradox.3Gaelic is described as foreign here in the sense of 'alien, not one's own', rather than 'belonging to another country'. Yes, we know that Gaelic is spoken by some residents of the UK.