Hot Dog Stands and Other Street Foods, New York City, USA Content from the guide to life, the universe and everything 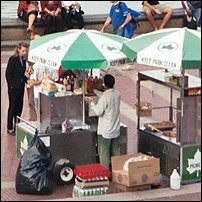 New York City is filthy with cheap places to eat. There are pizza places, delis, diners, taquerias, and bagel shops where one can get a good meal for under $5. But if the hungry pedestrian can't be bothered to go inside to find something to eat, he often need look no further than the nearest street corner. Though not unique to New York City, the food stand in its many forms is one of many international symbols for that bloated metropolis. It is instantly recognisable by its colourful umbrella, its shiny metal body, and, as the pedestrian nears it, by the steam pouring from its hot belly.

The traditional hot dog stand is a metal cart approximately two metres by one metre. It is made up of several sections. The bulk of it is taken up by closed containers either filled with or heated up by boiling water. These containers keep the food warm. Other sections keep drinks cold, and others are open to the air. The whims of the stand operator dictate what goes on this open-air section. Some vendors use it to store buns, ketchup, mustard, or other temperature-neutral items; some use it to display empty cans of the beverages they have for sale; some convert this area into a small griddle; others use it for God knows what end. As mentioned before, the cart is topped by a large, colourful umbrella. The umbrella shades the vendor and keeps him dry, but is also convenient advertising, either for the hot dog brand supplying the cart (Sabrett's and Shofar's are perhaps the most visible) or for local businesses, such as gyms and theatres.

The hot dog stand provides a surprising variety of foods considering its size. On the ubiquitous hot dog stand, the vendor can often place ketchup, mustard, onions, sauerkraut, and sometimes chilli. One can also buy pretzels, knishes (dumplings), chips and other snacks, and assorted juices and soda at a hot dog stand. If the hot dog stand has a menu posted, it will usually advertise all of these items. Be aware that this menu is an outright lie, and to avoid an awkward conversation, always ask the vendor if he has what you want before you go ahead and order it.

The traditional hot dog stand can be found on most corners in high-traffic areas. For the tourist visiting popular attractions in Manhattan, this means that he will see a hot dog stand just about everywhere he looks. Aside from these areas, the hot dog stand can also be found on the busier intersections of any neighbourhood, where they compete for the culinary attentions of New Yorkers looking for a quick meal.

Be advised that the price of the food at a hot dog stand is by no means regulated, and the vendor charges as much as he thinks he can get away with. In tourist areas, or in areas rife with businessmen, a hot dog will go for $1.50 or $1.75; in residential areas, the price can drop to $1 or even $0.75. The prices of the other items follow the same pattern.

Buying food on the street has many advantages, the first being convenience. Food stands are easy to find and get to, and the time between ordering and eating is seldom longer than a minute. Street food also tends to be surprisingly filling. Aside from the falafel cart's heavy wares, one can easily satiate oneself with a dense pretzel or bagel, or two hot dogs, or a gigantic burrito. Street food is also quite cheap; the consumer must work hard to get a meal that will cost him more than $5. One should also keep in mind that street food is, relatively speaking, fairly sanitary, despite its location. It is probably about as clean as any diner, and undoubtedly far more clean than the average deli, where hundreds upon hundreds of customers are likely to have handled and contaminated your food before you lay a hand on it.

Before we all rush out and gorge ourselves on street food, however, be warned; though not unhealthy, street food is liable to disagree with your stomach to some small degree, especially if eaten in an overzealous manner or in large quantities. The tourist's stomach will probably be fairly tolerant of it at first, but the time will soon come when the idea of eating another hot dog or kofta platter is too much for a fragile mind to bear. Excepting the totally harmless bagel carts, which enjoy brisk and consistent business, the native New Yorker's taste for street food declines with each month of residency. Despite this, no New Yorker, with the possible exception of Rudolph Giuliani2, would want to see them gone, as they are an integral part of the cuisine and character of New York City.

1Rumour has it that, in some Indian and Middle Eastern restaurants, when you believe you are eating lamb, you are actually eating goat. Goats are, of course, eaten and enjoyed in many countries (and are quite delicious), but due to Americans' irrational dislike of eating this horned creature, the cooks in ethnic restaurants of all types substitute lamb, in name if not in flesh.2At the time of writing, Giuliani was mayor of New York City. Giuliani is a controversial figure due to his strict reign over the city. His supporters give him (unfounded) credit for New York's precipitous drop in crime through the 1990s, and for revitalising the city's local economy by making it more tourist-friendly. His detractors say his policies are Draconian and believe he has sold the city out; they cite his attempts to rid the streets of hot dog vendors, painters, and musicians.