Maigret, Literary Detective Content from the guide to life, the universe and everything 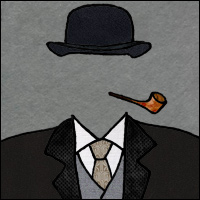 Maigret is one of the best-known French literary crime investigators, enjoying international fame and subject to many adaptations and tributes, films, radio series, comic strips, and more. The purpose of this Entry is to describe the books, both from the aspect of their content, and what the reader might get from these. We will also give a brief account of how the books inspired other works.

The series was written by Belgian author Georges Simenon (Liège 1903 – Lausanne 1989). The first Maigret novel, Pietr-le-Letton (Maigret and the Enigmatic Lett), was published in 1931 by popular editor Arthème Fayard, despite his initial lack of enthusiasm. Simenon was under contract with Fayard till 1934, when he wrote what he thought would be the last Maigret. However, success was such that he obtained a contract with Gallimard for a further six books (till 1944), following which he went to Presses de la cité till his retirement in 19721.

Most novels (although not all the earlier ones) have an identical structure: an eight-chapter book which can be read in a fairly short time. For Simenon, one should be able to read his books at one sitting, say during a single train journey, making it a quintessential roman de gare.

The eponymous character is French Commissaire2 Maigret, from the Police Judiciaire in Paris, famously located at 36 Quai des Orfèvres. Although he is never really described, a few trademark features are quite strongly associated with him: a heavy figure, he's always wearing a hat and smoking a pipe. He is often churlish and grumpy, though sometimes he just pretends to be when he feels this is expected of him.

Although he can be quite unrelenting at times, he is also a very human and compassionate person, who might feel sympathetic with the victim or even, occasionally, with the murderer. His motto is to understand, and not to judge.

He is also a very heavy drinker3. While some claim that this is a cultural trace of how much French people used to drink at the time the books were written, it seems more likely that it is rather a reflection of Simenon's own alcohol issue. Maigret's favourite drinks appear to be calvados, beer, brandy, and white wine. He doesn't appear to be very keen on high-brow stuff: somebody once offered him

a calvados so old, so excellent, that it made [him] thirst for something more vulgar and refreshing4.

One further, rather amusing feature of his drinking habit is that, when he starts an investigation with one kind of drink, he keeps drinking the same till the end. Of course, this is not so much a rule as a guideline, and he more often than not mixes whatever he feels like, stumbles upon, or is offered to him in the course of the investigation.

Some of the others

The general atmosphere of the Maigret books has some sort of indistinct touch to it, possibly reminiscent of fellow Belgian poet Émile Verhaeren's works. Things are not described with physical accuracy, but rather the impressions and character which emanates from them are given. In a few brief sentences, Simenon may describe a bar in such a way that readers would feel they had been there before.

The story usually takes place, naturally enough, in Paris. However, Simenon uses many tricks to make his character travel around France, occasionally abroad: several books take place after he retires, so that he is not bound to Paris anymore; he may go on vacation somewhere, or be sent away by his superiors to investigate some delicate case away from the French capital.

Simenon's depiction of society may remind one of Zola's depiction of France under the Second Empire. Often, the milieux that Maigret visits are popular, or well-off but with lower class origin. However they almost always turn out to be sordid, with greed and pettiness behind people's motivations. The motive for murdering is frequently money, occasionally accident, passion, revenge. Posh people appear to have the same compulsions and dark sides as everybody else.

The investigation goes on fairly quietly (a reason why Fayard wasn't too optimistic about the series' potential success). There are no frenzied chases, no rough fights, and Maigret hardly ever draws a gun. However, there are the occasions when he does so, and the commissaire is well aware that killing can be part of the job. This shows in his matter-of-fact, yet paternal attitude when he softly asks young Inspecteur Lapointe, who just shot someone:

Is it your first one?

Maigret novels are not traditional whodunnits. The killer may not even appear at all till late in the story. Solving the murder is not done by scientific examination of clues, or making an unforgiving, almost mathematical analysis of testimonies; nor does it follow a holistic or surrealistic approach. Maigret's procedure, or lack thereof, relies on his subtle understanding of human character. He tries to understand the victim and their background as deeply as if he had known them for years. His idea is that if you understand the victim's life and surroundings well enough, then the identity of the murderer will appear as self-evident. Maigret attempts to scratch the apparent ordinariness of those people around the victim, and reveal what it is which makes them special, different from others – why this one person would kill, while the other in a seemingly identical situation would not.

As this procedure takes some time, it is not surprising that the victim should be discovered in the first chapter. We summarise the plot after Maigret decides to take up the investigation:

Why do We Read the Books?

So, beside the thrills usually associated with any crime fiction, what is it which makes Maigret books popular? Are they really so universally and unconditionally admired?

First, the literary style itself is attractive. The novels are written in a straightforward fashion, making them a pleasant read. The hazy depictions of popular disctricts and bars in Paris, each with their own peculiarities and fauna, give the readers a sense of being there as if they were following the detective around.

The books also follow the flow of the century, rather than being set in a specific time. So, in the 1930s, Maigret's hat is a bowler; in the early 1960s he buys a television, and later a car, although he himself won't drive. It is unclear whether this is a deliberate choice by Simenon to describe the evolution of society, or rather if it just happens to be the way the books are written for the author's convenience. However, while ordinary society is described in the books, there are no references to political events or situations. This neutrality may well contribute to the timeless quality of the novels.

Furthermore, no attempt is made to look as modern as possible, using the latest in hi-tech devices and gadgets: people are ordinary, like the ones the readers could meet every day. If Maigret buys a TV, it is simply because more people in real life have one. One other point is also interesting to note. Although the series largely follows a chronological order, several early novels (mostly between 1934 and 1946) take place after Maigret has retired. However, Simenon does not try to imagine what society would look like in the future, and it is as if the retired Maigret was still living in the same year the novel is written.

Also a possible source of popularity is the gastronomy aspect of the books. Although many of Maigret's meals are, for practical reasons, simple sandwiches and beer, he enjoys whenever possible Mme Maigret's expert cooking skills. The dishes she prepares are French traditionals and seem taken straight from Alexandre Dumas' Grand Dictionnaire de Cuisine, with highlights such as calf liver à la bourgeoise, choucroute, baked fish in white wine, and Maigret's favourite blanquette de veau.

This being said, while one may appreciate Maigret's subtle knowledge of human character, it also means that his sudden understanding of who the criminal is may appear to simply pop out of nowhere. Along with the slow rythm of investigation and lack of action, these are reasons why readers may dislike the series, especially those who like spotting clues and trying to find the murderer themselves.

Also, this researcher found in one instance some slightly homophobic attitude from the fictional policemen, which seemed oddly out of place. This may however be attributed to the general attitude of society at that time towards the gay, caused more by ignorance than malice. One may similarly argue that Mme Maigret's portrayal is rather sexist; as this is not the case for all women in Simenon's work, this is probably rather a reflection of attitudes at the time of writing.

Simenon's own opinion of the series was that it was more of a second-rate literature, unlike his other production (his romans-romans, or 'hard novels') which he found deeper and more insightful. However, he wasn't being snotty about the Maigret series, which he seemed to like as well.

Maigret has been a source of many related works, whether adaptation, tributes or parodies. Here we mention but a few:

Several websites are devoted to the universe of Maigret. A few examples, which also illustrate the international popularity of the character, are given below.

1Simenon was generally a very prolific author, and his work is by no means restricted to Maigret.2More or less equivalent to superintendent.3As one h2g2 Researcher's granny once put it: Mais c'est un vieil alcoolique!4Which turned out to be un demi, a half-pint of beer.5Examining magistrate.6Inspector Grouch.7If you must know, the victim would never have ordered a Martini.8Literally, 'with a little song'.9Incidentally, the murderer was always drawn as a caricature of René Goscinny, best known as the creator of Astérix. The two policemen and the innocent suspect were caricatures of comics artists Gébé, Gotlib and Fred.