Sea Bass Content from the guide to life, the universe and everything 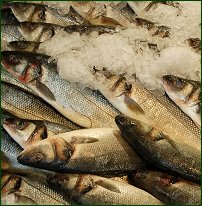 Bass is a variety of fish. Actually the term covers several different species of the Moronidae family. This Entry concerns the Sea Bass (Dicentrarchus), not the Striped Bass (Morone). It concerns a kind of guitar even less, and is only remotely linked to beer.

The Life of Sea Bass

Sea bass is a rather large fish, about 40 to 70cm length and 1 to 3kg weight in average. Particularly large individuals might be more than 1m and weigh about 12kg. A sea bass's life expectancy is about four years in the wild, though they can actually live up to 20 years1.

The body of a sea bass is covered with large, regular scales. Its colour varies between individuals; it is usually dark grey to green on the back and white on the belly. There are two fins on the back; one of them is endowed with sharp pikes which can be used as a defence against predators.

Sea bass can mainly be found in the North Atlantic ocean, between 30°N and 70°N latitude (that is, between Morocco and northern Norway), but also in the Mediterranean and the Black Sea.

Its large caudal tail makes it a strong swimmer. As a consequence, it doesn't mind living in currents or agitated sea. It tends to stay in shallow waters, rather close to the coasts. However, being remarkably tolerant to wide variations of salinity, you can also find sea bass in some rivers, up to 10km away from the river's mouth.

The sea bass, especially the younger ones, usually live in schools. They are sensitive to sounds: while they are attracted by softer noises, any violent noise will make them swim away.

They are fierce carnivorous hunters who feed not only on smaller fish (such as sardines or herring), but also on crustaceans, seashells or squids. In time, they develop a wide range of preying techniques, allowing older sea bass to eat fewer, but larger prey.

From a Human's Point of View

Sea bass is a quite popular and expensive fish2; therefore it a sought-after target of commercial fishing. Being rough fighters, sea bass are also appreciated by sports anglers.

Although not an endangered species, there exists a definite threat of over-fishing. This is due to the fact that sea bass are a slow-growing species and the fishing methods are becoming increasingly efficient.

One of the reasons for sea bass being so popular is its tasty and delicate white flesh. There are numerous ways to prepare sea bass, from general fish recipes to Turkish stew. We suggest two more recipes here, an easy-going summer sort and a more formal one.

Barbecued Sea Bass:gut the sea bass, wash it and coat it with herbs and olive oil. Grill it on a barbecue, salt it and flambé it with cognac.

1The oldest recorded specimen was a 30-year-old resident of the Amsterdam Aquarium.2Actually, you can find reasonably-priced frozen fillets in supermarkets.