The Tree Cathedral, Whipsnade Content from the guide to life, the universe and everything 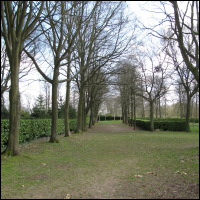 Situated in the Chiltern Hills in the county of Bedfordshire, some 30 miles (48km) to the north of London, England, the village of Whipsnade is famous internationally for its 600-acre Zoological Gardens, where animals, including many endangered species, live in a beautiful parkland setting. However, Whipsnade has another spectacular attraction to offer the visitor: a cathedral, not far from the Zoological Gardens. No monument in stone and stained glass, with flying buttresses, towers, steeples and the like, but built with 'walls' of living trees — the Whipsnade Tree Cathedral.

The cathedral, a full-sized outline of its medieval cousin, occupies a 9.5 acre (38,500 m2) site. If its walls are constructed of trees, then its nave, chancel, transepts, chapels and cloisters are grass avenues, where visitors may stroll or sit in peaceful contemplation. Each section of the cathedral is made from a different species of tree: the porch in oak, the chancel in birch, the nave in lime, the cloisters in ash, the Lady Chapel in Atlantic cedar, the north and south transepts in horse-chestnut. In addition to those already mentioned, other tree and bush species may be found, some of which have self-seeded: beech, maple, pine, spruce, sycamore, whitebeam and yew.

The whole project was the brain-child of Edmund Kell Blyth (1898 - 1969), a local landowner and lawyer. Original planting started in 1932; Blyth was inspired by a visit he and his wife made in the autumn of 1930 to the Liverpool Anglican Cathedral:

...we drove south through the Cotswold Hills on our way home and... I saw the evening sun light up a coppice of trees on the side of a hill. It occurred to me then that here was something more beautiful still and the idea formed of building a cathedral with trees.

The cathedral represents an act of 'Faith, hope and reconciliation' in memory of two close friends of Blyth who were killed in the First World War. In 1916, while at the Royal Military Academy at Sandhurst, Blyth made the acquaintance of Arthur Bailey and John Bennett. The three men soon became very close friends, but Bailey and Bennett were killed before the end of the war. In 1925, Blyth bought a pair of cottages at Whipsnade and converted them into holiday homes for poor London families as a memorial to his friends, but he felt that they deserved something more worthy in their memory.

Soon after, in 1927, Blyth bought Chapel Farm, right by the 18th Century church in Whipsnade. The farm included the present site of the cathedral, but prior to planting it was a field in which Blyth and his neighbour had chicken runs. In 1930, another close friend, Francis Holland, was killed in a car crash in Canada. This spurred Blyth on to begin his project, assisted by one Albert Bransom.

First to be planted were what are now the north and south transepts. Blyth envisaged this as an avenue of limes which would overhang the avenue to form a roof. A line of poplars was planted outside the lime avenue at ten foot (three metre) intervals to give the effect of pillars, but poplars do not grow well in chalky soils such as those at Whipsnade (as Blyth was well aware) and did not survive.

Work progressed throughout the 1930s. In 1933 two chapels — the Easter chapel and the Christmas chapel — were planted to fill in the corners between the nave and the transepts. In 1938-9 a dew pond was created, set at the centre of a cloister garden, with a 'tower' at each corner. By 1939 the cathedral was almost complete, but further progress was interrupted by the outbreak of WWII, forcing Blyth to rejoin his regiment. He returned in 1947, after involvement with the military government of Berlin, to rejoin the family law firm. In the intervening years, the site had become overgrown. Work continued, Blyth being assisted now by Gerald Wallsam and William Baldwin. By 1952 the ground had been cleared sufficiently to enable ecumenical services to be held.

Blyth's original layout remains intact, the only change being when an avenue of hornbeam trees was added to border the path from the small car park to the cathedral. This was planted in memory of Tom Blyth, Edmund's son, who looked after the cathedral following Edmund's death, and who himself died in 1978, at which time the tree cathedral was given to The National Trust.

The cathedral is open to the public all year round, the car park up until 7pm during summer months and 4pm in the winter. There is no admission charge. The cathedral is not consecrated, but about five services are held each year, including an annual interdenominational service on 14 June.

Not far from the cathedral is another field and accommodation buildings collectively known as Windy Sayles. The field was donated by Blyth to the local division of the Guide Association on the conditions that the site would be used by members of the Guide Association only, and that the division would keep the cathedral tidy. This they did for a number of years until responsibility for the tree cathedral was taken over by The National Trust, but to this day Guides, Brownies and Rainbows continue to help with general tidying duties. In the middle of the Windy Sayles camp field are three trees in memory of the three friends whom Blyth lost. A fourth tree was planted in 1981 by Blyth's other son Henry in memory of his father.