Winking and its Social Implications Content from the guide to life, the universe and everything 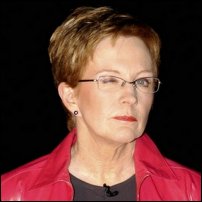 I used to have enormous difficulty winking as a child. I would practise in front of the mirror. I couldn't do it without at least scrunching up my other eye significantly. Hopeless. How could I get street cred as an eight-year-old without a wink? My father just did it at will. When he said something cheeky to my mother, or my brother, he would let me in on the joke with his sly wink. He would shoot me a subtle smile and flash me a wink in the – well, in the wink of an eye I suppose. I used to wonder how he became so accomplished. I thought there was going to be a day when he took me aside and said: 'Look son, it's time you knew how to wink. Pack a bag and tell your mother we'll be gone for a few days', but it never came. There was no rite of passage, no Winking School for Boys, one day I could just wink. Still not sure when that day came. But now, I wink therefore I am.
– An h2g2 Researcher

This Entry is not about winks used in the game Tiddlywinks, which score points, but the human facial expression of quickly flicking closed one eyelid, which may score you points of a different kind.

Why do people wink? The usual reason is because you want someone to know that you're just kidding. It's also a bonding ritual and acceptable social substitute when kissing isn't possible, between established couples. But there are different kinds of winks; anyone who has ever been on the receiving end of a wink would probably tell you something different. It all boils down to the situation at the time, who the perpetrator was and what your relationship to them is.

So how do you wink, exactly? Close one eyelid while keeping the other open. Make it last a fraction of a second, just long enough for the recipient to see it but out of sight of the object of the joke. Try not to scrunch up your face or it will look faked. Politicians have got the art of the fake wink perfected, along with the tedious point-at-a-stranger-in-the-crowd-and-grin-delightedly routine.

Women learn quite quickly that when a man finds them attractive he will find an opportunity to practise his wink. Depending upon her feelings, her reaction will be one of flushed pleasure or undisguised disgust. A wink in this situation is foreplay to the foreplay, as it were, or an end to the potential 'we're friends, but can it go further' thoughts. It's not wise for a woman to do the winking even in these days of sexual equality; if he's so slow that he hasn't winked at you yet, he probably doesn't fancy you.

This wink is an expression meaning something is as obvious as... the nose on your face, perhaps. Such a visual wink is identifiable in the final scene of the movie Stardust when 'whoopsie' Captain Shakespeare (Robert De Niro) winks at dandy Humphrey (Henry Cavill), even though he's sitting with his girlfriend Victoria (Sienna Miller). She sees the wink and knows full well what unspoken message is passing between the two men, to her intense fury!

This one is easy, unless you're autistic or sight-impaired. Autistic people do not understand body language or facial expressions very well, and are liable to take things said in jest quite seriously or literally - even if accompanied by a wink. Try to make allowance for this; the non-autistic world is confusing enough. Sight-impaired people probably can't see someone winking so the joke would fall pretty flat, and there's nothing worse than having to explain a joke. Try subtle oral humour instead.

Actor Jack Warner used to end his Dixon of Dock Green policeman-on-the-beat programme with a few words of advice and a reassuring wink. It was the prelude to 'Let's be careful out there' spoken by the Sarge every week in Hill Street Blues and to Nick Ross from Crimewatch telling us 'Don't have nightmares'.

The 'I'm Faking It' Wink

Football. Ronaldo. Those two words should be enough to convey the 'faking it' effect of the wink in question, which was broadcast on live TV, thereby exposing the fraud to millions of outraged England supporters. Trying to explain the anger that situation generated is rather like attempting to convey the rules of offside to someone not really into football when they're just being polite in asking questions they probably don't want to know the answer to. However, for the benefit of people who didn't witness the incident, Cristiano Ronaldo (playing for Portugal) played a large part in getting his Manchester United team-mate Wayne Rooney (playing for England) sent off. His extraordinary wink aimed at the Portugese bench elicited a furious reaction due to the unsporting behaviour. England continued playing with one less player than Portugal, eventually lost the match and consequently exited the World Cup. Ronaldo's wink has now achieved an infamy status akin to the 'Hand of God' goal claimed by Diego Maradona during the quarter-finals of the 1986 World Cup in Mexico, also against England.

US President George W Bush was criticised for winking at the Queen after he made one of his classic Bushisms. The British are sticklers for royal etiquette and the Queen in particular was not amused, something even Bush noticed:

She gave me a look that only a mother could give her child.

...although that comment in front of Her Majesty for the amusement of the listening audience slid him even further into the pile of dung he was already immersed in.

Alaskan Governor Sarah Palin was a breath of fresh air when she first came to worldwide attention in the run-up to the voting for the next President of the United States. However, as the 2008 campaign gathered momentum her flirty behaviour, including constant overly-accentuated winks, became tiresome and quite possibly cost her the plum Vice Presidency job.

Diminutive ice queen Anne Robinson gives a deliberately-accentuated wink to viewers of her TV quiz show The Weakest Link. It could be that she is letting us know that she's just kidding when she is belittling and insulting the intelligence of the contestants, but according to former BBC colleague Jonathan Maitland: 'it's not an act'. Her attitude can be described as condescending and downright rude; this is the person to watch at work if you enjoy seeing people squirm with discomfort. Certainly the controlling, unfeeling persona pays well – Ms Robinson is a multi-millionaire. Her status as an icon was confirmed when she was portrayed as automaton 'The Anne Droid' in the BBC's revamped Doctor Who episodes entitled 'Bad Wolf' and 'Parting of the Ways'.

Today more and more people conduct relationships online, or have 'virtual world' contact. The Internet is a boon for single, housebound or otherwise lonely people. It's almost impossible, however, to tell when someone is joking or kidding around via just the written word, so quite early on in the new social world of cyberspace emoticons (smiley faces) were developed to express wide-ranging emotions you can't see. After the typewritten colon-dash-close bracket (original smiley face) which anyone can learn to do, possibly the second was the sad face (colon-dash-open bracket) and the next was the winkeye (semicolon-dash-close bracket). Nowadays as code has advanced, smileys can be typed in a certain way to actually make a reflective image of the expression.

Possibly the most well-known tribute to winking was performed in a sketch by the Monty Python regular cast in the first series - it's the catchphrase which regularly scores highest on 'Most Recognised...' polls and quite possibly helped make it the comedy phenomenon it became. It is generally used when you're being euphemistic - talking about something rude, usually sexual, while seemingly talking about something else. The nudge and wink are used to show this, often with an 'if you know what I mean'? comment. The 'nudge nudge wink wink' enactment has entered social activity by way of an ice-breaker; when acted out properly it shouldn't fail to raise a smile.

...a wink to a blind horse, or at least so says the old proverb. In other words, one futile gesture is as useless as another futile gesture. The British group Faces released an album of this name, A Nod Is As Good As A Wink... To A Blind Horse in 1971.