Meeting Icebreakers Content from the guide to life, the universe and everything 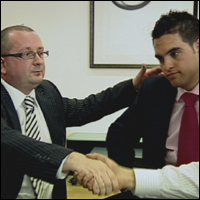 Have you ever been invited to a business meeting and then had to introduce yourself to the assembled throng? Of course it's not enough just to give your name; maybe you have to say why you're there, or why this meeting is relevant to you and what you think your 'successful outcomes' will be. Occasionally, you're put on the spot and have to speak first, or sometimes you find that you're sitting at the far end of the table, suffering a kind of 'creeping death' as you wait for your turn. You can guarantee you'll never remember anyone else's name while you're frantically trying to remember your own.

In fact there's a reason why many of us hate this experience, and psychologists call it 'interpersonal tension'. When we enter a room full of strangers, we are naturally on our guard and it takes us a little time to relax in their company.

If however, you're running the meeting, you want people to be able to relax quickly, so that they can contribute from the outset. It was for this reason that someone invented one of the silliest items you'll ever see on a meeting agenda: the icebreaker1.

Sometimes icebreakers can be simple adjustments to the routine. Why should delegates go around the table introducing themselves in order, when they can instead toss a lemon to the person who they would like to speak next?

Why launch into boring things like reciting our expectations of the meeting's outcomes when we can instead say something more interesting about ourselves? Here are a few examples:

If you're running a large workshop, you may want to learn a little more about the delegates before you get started with some of the activities. Maybe you want to know who the strong characters are in the group. If you intend to split the group into smaller teams for some activities, then these exercises will help you decide who to allocate to each team. Here are a couple of ideas:

The other reason for icebreakers is to stimulate creativity. Psychologists tell us that as a race we are divided into left-brained and right-brained thinkers. Our left hemisphere processes logical, verbal tasks, whereas we use our right hemisphere for thinking in terms of images, sounds and the like. That's not to say that we can't use both, but some of us might need a bit of stimulating to get the creative juices flowing, so to speak. Here are some icebreakers which should get those synapses firing on the right-hand side:

It's not just in business meetings of course; actors will use similar exercises to get warmed up for a rehearsal, using any of a number of improvisation techniques, such as the Hamster Throwing Game. These may not always transfer to the office environment, but they could certainly be used in new media organisations - you know, those ones with grass on the floor and break-out rooms with coloured beanbags.

Laughter is infectious of course, so if as the meeting organiser you feel up to it, you could just stand at the front of the room and laugh out loud. To get started, focus on anything which is slightly amusing - someone with untidy hair, maybe, or the confused looks on people's faces. Keep it going, no matter how stupid you feel inside - someone else is bound to join in3, and then it'll be unstoppable4.

Party games, too, are invaluable sources of ideas for warm-up icebreakers. As with all of these, try to adapt them as far as possible to the situation you're in. We'll finish with two which are popular in Germany, we're told:

None of these cunning schemes will guarantee that your meeting will be a success - but at least if it is a flop, you'll have had some fun trying!

1Icebreakers are ships of course. They're designed to cut a channel through surface ice to open up a line of communication, so it's a well-chosen metaphor in the office environment.2Give a small prize to the winner.3You hope!4Although you should put a stop to the mirth at some judicious point - preferably before the folks in the next cubicle start to complain, or heaven forbid, join in.5Or, if you're in Germany, 'Onkel Jupp plätschert lustig in der Badewanne'.