Watching England in the Football World Cup Content from the guide to life, the universe and everything 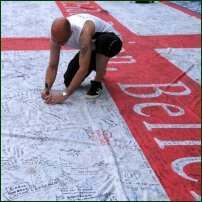 The business of watching England navigating their way through this most prestigious of international tournaments is a fraught, tiring and emotional business. Victory must be expected - or there doesn't seem too much point in watching - but defeat should also be anticipated. There are so many variables to consider and so many challenges to contemplate, that the whole business is best served by months of careful advanced preparation.

This is, of course, imperative, as there is much to consider. The first key issue is refreshment. You might imagine, especially if you are in a pub, that alcohol is the order of the day. This is wrong. If it is a hot day, you may have as much as two long hours ahead of you, and it will be tough. You do not want to fall asleep - you need caffeinated energy drinks to keep you going. Sweat is bound to be an issue, so as well as keeping your fluids up, you also want to make sure you take in plenty of salt and sugar. While we're on the subject of fluids - make sure you go to the toilet at least once before kick-off and again at half-time. You cannot afford a desperate need to pee when the game is poised at 1-0. Or whatever. One more thing: make sure you have a few newspaper accounts or reports from some source or other of catastrophic England defeats. You just might need them.

If there is one thing worse than England conceding a goal1 it is England conceding a goal to somebody you've never heard of. This does not need to happen - as soon as England's group is announced, now is your chance to make sure you have seen everyone in action that they might conceivably meet in the tournament. It may involve a certain amount of foreign travel if they get Saudi Arabia, for example, but it's surely worth it for the knowledge you'll glean. Why not get together with a group of friends and pay for one person to do the globetrotting with a video camera to give you all the benefit?

In a situation like this, the stakes are high. When you've committed yourself it's too late to turn back. You must pick the right option for you and your needs. We realise this is one of the most momentous decisions of your life and, ever mindful of our responsibilities, have done our best to lighten your load. Here are some options:

This has two obvious advantages. Firstly, it's cheaper. Secondly, you have more control of your environment. You have much greater access to crucial amenities such as comfortable chairs and the toilet. The disadvantages are that you lose the big crowd atmosphere (not much of a disadvantage if you hate big crowds), you may not have access to someone to shout angrily at (that was never a penalty, how can he give that, the man's an idiot, etc...) or make authoritative random assertions at (he should play Owen now/switch to a 3-5-2/never should have started Crouch etc...). This can, of course, be solved by going to the next level up:

For many modern purists, this is the best way to watch live football: with your mates, in front of a big screen. It has the advantages that there is still a relatively low person/toilet ratio, there are people you can argue with about stuff, and someone else to get the drinks in. There may be someone else to get the drinks in your house, but if there is someone else in your house and they are not already watching the football, they should probably be encouraged to go out for the afternoon, or they may well interfere2. However, die-hard fans may argue that the only proper way to watch the game is in fact:

Until FIFA make it compulsory for England to host all World Cup Tournaments, this may well mean foreign travel, which will probably mean being regarded by foreign police (and your own media, for some reason) as a thug: even if, of the 80,000 England fans at the game, only three are actually arrested, and they are subsequently released without charge. Nonetheless, the fact that you can actually be right there in the stadium when England scrape through the qualifying round with a tedious and depressing draw is, in the eyes of many, reason enough to choose this option.

No, not the during-the-game-flop-in-the-box-and-we-might-just-pull-level kind. Shootouts. Nobody's saying penalties are inevitable, but you need to be ready just in case. So here's the big question: when the penalties start - how do you sit? Don't, for goodness sake, sit back calmly in your chair. It's bad Karma. Fairies will die. Also, you need to be ready to leap out of your seat with delight. You will probably also want something to punch, just in case, like a cushion or something soft and not alive.

Bearing all this in mind, personal space is vitally important. If you are in a pub, this may be a problem - best to just find the most inebriated person in the room and bank on them not noticing the hugs, kisses and batterings they take throughout the fraught course of the game. If you are at home, you really need a chair, or preferably a sofa, to yourself. Don't invite too many friends around. If someone gets injured in your home, you will have to call an ambulance - do you really want to do that when a crucial spot kick could win England a big game?

This, however, is just one option, and alternatives have been suggested. One Leeds United fan (who obviously knows more about painful failure than most normal people) suggests the following:

With regard to seating arrangements, I've always found it best to stand during penalty shootouts. This allows for two options:

If the Worst Should Happen

If - and this is a big if - England should get knocked out, this is obviously going to be hugely traumatic. A good way to cope with the pain is to quickly transfer your affections to a second team. Obviously, it would be ridiculous to assign a second team while England were still in contention, but it's worth keeping your eye on the other competitors to size up potential options. Here are a few ideas:

Strange English social logic dictates, for no particular reason, that having allowed one nation to host the competition, sell the broadcasting rights, boost their economy and beat up everyone else's fans, it would be jolly nice if they won the thing as well. This is a risky business, though. Of the World Cups from 1990 - 2006 there has been just one winning host, and only two finalists.

It may seem logical that the team that knocks out England must be the best team in the world and therefore must go on to win the tournament. This is not true. The team that knocks out England generally did so either by cheating3 or via some dubious refereeing decision (offside/penalty/sending off/disallowed goal). For this reason it is only right that they should, in their turn, get knocked out. This may not seem to come from the same gentlemanly mindset that wants the hosts to win, but it does.

The 'manager who makes odd remarks after every game'. The 'player with the amusing haircut'. The 'most engaging national anthem'. Australia. This has nothing at all to do with football, it's just a shameless popularity contest.

This is foolish, really. If there are outsiders still in it, it probably means England have gone out at the group stage4. Go on holiday.

The Team That Actually Deserves to Win It

They got to where they are with exciting football, pure entertainment and absolutely no cheating. They do not exist.

This is, it must be admitted, virtually unprecedented. Since the 1966 World Cup fate has conspired to deny England its rightful, if not destined, second victory. We can only assume this is for some dramatic reason. We thought that it would be to enable us to win it after 40 years, and, although some are hoping for 60 years, planning ahead for the 2066 World Cup seems wise.

Don't panic. First, reach for the newspaper cuttings you got earlier, the England losing ones. Read them. They will calm you down. Now, have a stiff drink. Sit in total silence for about an hour, savouring this moment. Then go to bed, you must be exhausted.

1Which there isn't.2This takes a number of forms, including: Asking stupid questions; complaining that there is too much football on television and that it is stupid and boring; or interrupting you at crucial moments with irrelevant requests for things like food and water.3The most famous exponent being Diego Maradona's 'hand of God' goal: if he had been booked for the deliberate hand-ball as he should have been, he would, obviously, have been too upset to score the second, perfectly good, goal, and England would have gone out on penalties rather than losing in normal time.4Although in fact, since the group stages as we now recognise them emerged, England have only failed to qualify from them once, in the 1958 World Cup, although it is of course now clear that they were saving themselves for 1966. There is the small matter of the World Cups that England didn't feature in, but they don't really count, do they?