Public House Male Toilets Content from the guide to life, the universe and everything 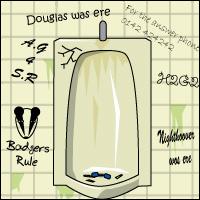 While at a public house, a man will often feel nature calling and have to use the public facilities. Contrary to popular belief, this process is a tricky one that requires some skill and which, in the UK at least, can be riddled with problems along the way. But somehow, every man will eventually learn their way around these amenities, sometimes called 'the little boys' room' and 'the gents'.

Unlike the female equivalent, a men's toilet will not be lavishly furnished with high mirrors, potpourri, flowers, carpeted wash basin areas and a sofa or comfy chairs to sit down and a have a good natter on while powdering one's nose1. In fact, male toilets rarely contain anything of particular value because if something of value was put in, it would soon be damaged, destroyed and/or stolen by mindless vandals in a matter of hours. Thus, one can expect to find only a bare minimum of facilities in this particular room: these can include one or more of the following: urinals, a child's urinal2, stalls, sinks, soap dispensers3, mirrors4, hand driers, paper towels and condom machines of the highest quality. Whereas all these are provided by the pub, as well as posters advertising event nights and drinks on offer, some men take it upon themselves to display pages of pornography and graffiti 'advertising' which local girl offers the best sex. There will occasionally be tissue paper hanging from the ceiling.

It is often the case that a drunken man will, in what he thinks is an amazingly hilarious moment of intelligence, write something onto the stall partitions, the wall to the side of the mirror or just about anywhere else they can find at the time. There are many variants on what can be said, but mostly they are aimed at a few select people. In their philosophical state, men like to inform others of the small appendage of their best friend (as a joke), or enemy (as a slur). Failing that, they can sometimes resort to describing their enemy as a coarse four letter word. Being as intelligent as drunken men are, though, they do not stop there; it is hard to walk into a male public toilet without being informed that a girl, normally the person's ex-girlfriend or friend's current girlfriend5, apparently entertains many men in the town; sometimes they go the extra mile and offer the telephone number of the poor girl. Any sober man will of course know that all of these drunken ciphers should be ignored at all cost and reading them should only be done as a humorous pastime while using the toilets for their real purpose.

The main problem posed when answering nature's call is which urinal to use. Many urinals are a line of porcelain or stainless steel bowls, hooked halfway up the wall for ergonomic ease. If you find yourself lucky enough to enter an empty toilet you have nothing to worry about and can go about your business stress free6; however, when other men are already using the facilities a problem soon arises. The first rule of thumb is to always leave at least one urinal empty between yourself and other users, remembering of course that the bowl near the door should always be the last option in this circumstance. If there is somebody occupying every second bowl and only ones in the middle of people are available, take a quick note of which man looks biggest and baldest - avoid at all costs. If, while in the middle of business a place becomes vacant, do not move away to it as this may cause offence to other users. Some toilets have small partitions between each urinal to make things less uncomfortable but as these are a luxury they should never be expected.

Some other places, however, prefer the design whereby a long and narrow gutter or trough runs along the ground while the men utilising it stand on a stainless-steel or tiled step. This system means that there are no predefined spaces for people to stand at and the user is required to estimate. Though partitions are known to exist in this design, they are even rarer than in the former one. Once again, an empty room gives a user free range: often the best place to stand is at the end, meaning that the next person can stand at the other end and subsequent patrons can congregate in the middle, spaced apart. However, when kicking-out time occurs it is often the case that people literally shove themselves into a small space between two other men to relieve themselves7. Unless one is desperate this is always a bad choice, but if it is necessary, once again it must be stressed to avoid anyone who looks particularly thuggish.

Both designs have cleaning methods involving water rushing down the back panel. This can be done in a number of ways: old designs release water constantly; whereas more modern installments do this at timed intervals; impressive fittings have a button that can be pressed after each use to clean the panel and the latest technology8 offers a system whereby a sensor flushes the panel once a person has walked away from the urinal. Blockages can cause the cleaning system to become clogged up and water to overflow; cigarette butts or toilet paper commonly block the pathway.

With either style, though particularly the second, one must always remember to adopt a mindset not unlike that of a golfer: keep your head down and your eyes focussed - try not to veer off to the side.

The other choice is using a stall. This option may be preferred by those with stage fright as it provides a barrier from other people and saves embarrassment - though don't expect the lock on the inside of the door to actually work. However, as these facilities are often used for more than just urination, it is not uncommon to find a toilet in a stall containing what is referred to, rather charmingly, as a 'floater', if it is not, then it most certainly will be very smelly and possibly stained too. As no other people are, or at least should be, in this small toilet haven, there are no real rules of etiquette other than to flush - not that this is regularly observed. Try not to take very long, either; this is no time to finish the last few pages of a gripping novel. Toilet paper should be viewed as a luxury but if it is there, it is often placed sideways to avoid the 'over or under' debate. As was previously mentioned, the end of an evening can often see the toilet mobbed with men trying to make their long, sobering walk home more comfortable, so stalls often seem like an ideal haven when the urinals are overflowing with people and thus there can be queues to use these: get in early to avoid waiting around and possible kidney injury.

After using the urinal a man is expected to wash his hands, usually with the soap that dispensers always seem to lack, and then dry with either paper towels or hand driers. Sadly, this is another rule of etiquette that men often feel the need to break, so do not pass obvious judgement over those who don't observe this rule, particularly if they are of the thuggish variety.

Do not hang around afterwards, unless you are waiting for somebody washing their hands. If the person you are waiting for is still in the first stage, then waiting near the urinals can be misconstrued: waiting outside the door may be more advisable. In fact, some of the classier establishments have a small porch, so that two doors must be opened before one steps into the toilet. This means that people cannot peek in to the toilets unless both doors are open and also provides a handy waiting area if it is needed.

1Well, the posh ladies' lavs are like this at least.2Positioned lower than the other urinals for a young boy's ease.3Though you'd be a fool to expect any soap to be dispensed.4Sometimes cracked, shattered or wholly missing.5Once again this is usually a slur or a joke, respectively.6Though avoid a urinal if it is next to the door; opening the door to see someone doing his business is somewhat of a shock.7Not everywhere has homeward-bound facilities like Reading.8Which would never be found in an establishment such as those discussed here, but should be noted in any case.