Coleraine, Northern Ireland, UK Content from the guide to life, the universe and everything 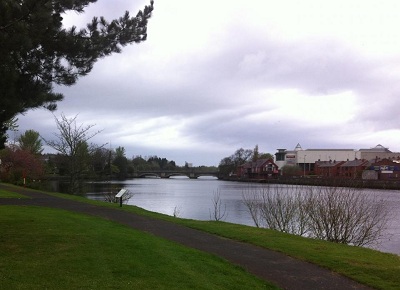 Coleraine is a town in the north of Ireland, approximately 55 miles (90 km) northwest of Northern Ireland's capital, Belfast, and approximately 30 miles (50 km) from the City of Derry/Londonderry.

Evidence of a settlement dating back to 7000 BC have been found in Mountsandel, now a suburb of the town, making it one of the oldest sites in Ireland. The name Coleraine comes from the Irish Cúil Raithin, which means ferny corner. The town is located in County Londonderry, close to the border with County Antrim, and is the last place where one can cross the River Bann before it meets the sea.

There are two bridges across the River Bann in the town, locally referred to as the Old Bridge and the New Bridge. In addition, the railway line crosses the river further downstream: because this is a single track railway line, a system of keys was used, exchanged between drivers at the next stop down, Castlerock, to ensure that only one train could attempt to cross the bridge at any time. This is a bascule bridge, and one section can be raised to allow ships to pass underneath.

Coleraine won the Best Kept Town and Ulster In Bloom awards in 2002. It was chosen in 2003 to represent Northern Ireland in the Britain In Bloom competition.

The rich and fertile soil around the river ensures that farming makes a major contribution to the local economy. Another source of income is tourism: as the largest town on the Causeway Coast, it attracts many visitors to the Giant's Causeway, who are well catered for when it comes to entertainment. Boating and yachting takes place on the River Bann, based at the marina. The sight of boats sailing in the evening inspired songwriter Jimmy Kennedy, and the annual Red Sails Festival is a week of family entertainment. Sport is also featured in the milk cup, as well as in the North West 200 motorbike road race.

The chemical multi-national Monsanto/Montefibre used to have a factory on the outskirts of town, providing employment for skilled and semi-skilled workers, though it closed during the 1980s. As a working port, Watts coal yard operated beside the old bridge for many years, prompting much hilarious banter3 before it was turned into the car park for Dunnes Stores. Coleraine Cheese was formerly made and packaged in a factory near the railway line, and though the production has ceased to take place there, the town's name is a recognised cheese brand. The Herald brewery produced local ales for a few years during the 1980s, but as in many towns, most manufacturing has now disappeared.

The railway line continues westward through a pair of tunnels, hugging the coastline until it reaches its final stop in Derry/Londonderry. This has been described as one of the best railway journeys in the world, by no less an authority than Michael Palin, who filmed the journey for his television series on trains.

It has long been regarded as a good shopping town, and while the wide, flower-bed-festooned pedestrianised precinct of Church Street contains many familiar high street names, a few independent stores till flourish. Footwear fans flock to the sales in Bishops Shoe Store, while Moores is one of the largest independent department stores still in business. Coleraine whiskey used to be produced in a distillery in the town, but is now made at the more famous Bushmills distillery 10 miles away.

There are many schools and other educational establishments in Coleraine, covering all levels of education, from pre-school through to further and higher education establishments. The secondary level schools have a large catchment area, with pupils travelling between the neighbouring towns to attend their preferred secondary or grammar school.

Coleraine is the home of the main campus of the University of Ulster. The university was built in the 1960s, and opened on 1 October, 1968. It was originally known as the New University of Ulster and won awards for its architectural design. One distinctive building is the octagonal Riverside Theatre, which has stunning views over the River Bann.

There was some initial controversy over the chosen location of the university, as it was believed by some that it should have been located in Northern Ireland's second city, Derry/Londonderry. However, due to 'the Troubles' at that time, it was believed that Coleraine would make a safer location.

The name was changed to its present on in October 1984, when it merged with Magee College in Londonderry, Belfast Art College, and what was known as the Ulster Polytechnic at Jordanstown, just outside Belfast. These campuses are still part of the university, and the Belfast campus, in Belfast's 'Cathedral Quarter', has recently had some modernisation work carried out. The Coleraine campus has world-class biomedical science research facilities.

Coleraine is also home to the main campus of the Causeway Institute of Further and Higher Education. It has a second campus in Ballymoney, only a few miles away. The college offers night and day classes in a wide range of subjects and levels, including GCSEs, A-Levels, NVQs, BTECs, and certificates.

Coleraine houses the headquarters of Coleraine Borough Council. The building itself was constructed on the east bank of the river, beside the marina. Coleraine Borough area extends to cover the nearby small towns of Castlerock, Portstewart, and Portrush. These latter two, together with Coleraine make up what is often referred to as 'The Triangle' area.

Politically, the East Londonderry constituency is formed from Coleraine Borough and its neighbour, Limavady Borough. This constituency is used for elections to both the Northern Ireland Assembly and the Westminster Parliament.

Coleraine has seen its fair share of celebrities passing through its streets over the years.

The County of Coleraine

The current county of Londonderry was originally known as Coleraine. The county was created in 1585 by John Perrot, during the reign of Elizabeth I. The intention was to have administration carried out in the town of Coleraine, although the jail and courthouse were built in Desertmartin, in the neighbouring county of Tyrone.

In 1607, the majority of the county was confiscated from the Irish aristocratic owners. In 1609, it was handed to the Corporation of London and its livery companies, and they were instructed to begin its plantation. The plantation was to cover the entire County of Coleraine, a small part of County Donegal round Lough Foyle, and the Loughinsholin barony. The barony consisted of what was then the north part of County Tyrone, and the part of County Antrim close to Coleraine town, called O'Cahan's Country. This large area was merged with County Coleraine in 1613 to make the new County of Londonderry. The county town was now the walled town of Londonderry, on the west bank of the River Foyle opposite the ruined town of Derry.

Coleraine Throughout the World

There are towns across the world that share the name Coleraine. For example, there is a Coleraine in Itasca County, Minnesota, USA. It is much smaller than its Northern Irish namesake, with 1,110 residents in 443 households, according to the census in 2000. The town is 98.47% white, 0.72% mixed race, and the remaining from other ethnic groups.

The town of Bryan's Creek Crossing in Victoria, Australia was renamed Coleraine by a surveyor called Lindsay Clarke who was working on the town in 1853. Te Mata Estate's Coleraine Cabernet/Merlot, a wine from New Zealand, also shares the name.

The town is immortalised in the song 'Kitty of Coleraine', which tells of a young milkmaid who spills her cargo when she sees a young man to whom she is rather attracted.

1Figures according to a census taken on 29 April, 2001.2According to the University of Ulster Quarterly House Price Index report, produced in partnership with Bank of Ireland and the Northern Ireland Housing Executive in March 2006.3Watt's coal? Why, it's little black lumps which can be burned to give off heat and light!