The North West 200 Content from the guide to life, the universe and everything 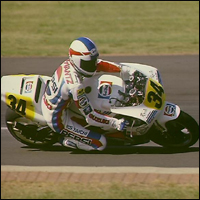 The North West 200 is a motorbike road race, held every May in the so-called 'triangle' area between the towns of Portstewart, Portrush and Coleraine. This is located on the northern coast of Ireland, and the rolling waves, blue ocean and distant hills of Donegal make it one of the prettiest race courses in the world.

The first ever North West 200 race took place on Saturday, 20 April, 1929. It was conceived as a major sporting event to bring visitors to the area, and was originally to be a road race of 200 miles long, hence the name. Despite the visitors that it succeeded in attracting, its early years were marked by opposition from local residents, particularly when the roads used were not closed for practice nights.

Jimmy Guthrie broke the 80 mph lap in 1934, and he is commemorated in the Guthrie Memorial trophy, into which the senior race trophy was renamed in his honour in 1937. In 1951, Geoff Duke pushed the lap record over 90 mph. That was the only year that the actual racing was split over two days. In 1957 Bob McIntyre, a four-times winner, set the lap record at 106.86 mph, which remained unbroken for seven years. In 1959, Tommy Robb became the first man to win more than one race in the one day.

The race was affected by financial viability and 'The Troubles' during the 1960s and 1970s, but was given a new lease of life from a dedicated bunch of local men in 1973. Records continued to be broken - Mick Grant recorded 122.62 mph in 1975, and Tom Herron set the bar at 127.63 mph in 1978, a record unmatched until 2002. The Golden Jubilee year of 1979 saw the first wins for local boy Joey Dunlop, but the event was marred by tragedy: a multiple pile-up left Frank Kennedy, Kevin Stone and Warren Willing unable to race again. Kennedy later died from his injuries, and Brian Hamilton and Tom Herron were also killed in crashes that year. In the opening years of the 1980s, two more fatalities (John Newbold and Mervyn Robinson) prompted the race organisers to review safety measures, and consequently a chicane was introduced at the pits.

The first female rider was Liz Skinner in 1990. Liz was instrumental in the 'Let Her Ride' campaign, which led to women being allowed to race alongside men in the Isle of Man TT, and since then women have raced regularly at the NW 200.

In 1996, another chicane was added, at Magherabuoy. In 2001, the race was cancelled due to Foot and Mouth disease. In 2004, Michael Rutter broke the 200 mph barrier at the speed trap.

The current course is just under nine miles long, and the races are four, five or six laps long, depending on the class of bike. With the riders averaging speeds in excess of 100 mph, spectators at any chosen vantage point on the course will see the bikes in any race zoom past them every five minutes or so. The course has changed and evolved slightly over the years, mainly in response to safety considerations, but is currently as follows:

From the pits, the bikes accelerate hard and leap over Primrose Hill, before braking heavily to get round the hairpin bend at York corner. Up the hill of Station Road they zoom, to a mini-roundabout, taken the wrong way round so it acts as a sort of chicane. Then it's past Cromore Station with a slight right hand bend, and on to one of the fast straight stretches towards the University of Ulster at Coleraine. A 90 degree left hand turn takes the bikes up a hill to the 'Magic Roundabout' at Ballysally, so-called because it is taken anti-clockwise. From there it's onto the very fast straight stretch to Mather's Cross, with a slight right hander, before coming down towards Portrush, through the Magherabuoy chicane, and a 90 degree left hander at Metropole corner. Once round that, the bikes take a sharp right hand turn under the railway bridge, up Blacks Hill, before carrying on along the coast road back to the pits and the start/finish line.

There are a number of races run on the race day itself. The current programme is:

Competitors must hold a valid FIM International non-championship licence for road racing. Newcomers have to prove they are capable of racing safely by qualifying during the practice laps - this requires them to complete at least two laps at 85% or more of the average speed of the top six riders in that class. For any race, there is a maximum field of 65 competitors, and the top 25 finishers will automatically qualify for that race the following year.

The race attracts spectators from all over the world, and there is a festival atmosphere to the place. The main day's racing takes place on the Saturday, but the practice nights on Tuesday and Thursday also attract a lot of onlookers and supporters. There are displays of vintage bikes, fireworks, and live broadcasts from local radio stations. Burger vans and ice cream vendors aplenty keep even the hungriest of bikers satisfied, and many cafes in the area offer huge Biker's Breakfasts, full of greasy meat products. Bikers from outside the immediate locality usually stop off in Ballymoney to pay tribute to Joey Dunlop. There, they can find a memorial garden which offers a place for some quiet reflection, as well as the bar he used to own.

The undisputed champion of the North West was the legendary Joey Dunlop, known affectionately as 'Yer Maun', who was killed during a race in Estonia in 2000. His family have followed him in the sport - younger brother Robert Dunlop won 15 North West races, before his fatal accident, and Robert's sons William and Michael are also racers. Another local boy is Philip McCallen, who is third on the list of all-time TT winners. Finally, Geoff Duke has given his name to vernacular rhyming slang for 'have a look'.