The Anglo-Irish Question, Part 1: 1798 - 1845 Content from the guide to life, the universe and everything 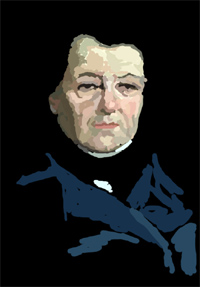 The history between England and Ireland is one of turbulence and much disagreement. For those who doubt that history has any relevance on today's society, Ireland1 is a prime example of where old habits do die very hard. From the times of Henry II to the beginnings of the Tudor dynasty, the government in Ireland was fairly stable. It would be another Henry, Henry VIII, who would cause more trouble when he attempted to centralise power by becoming King of Ireland. Similarly, trouble was aroused when he wanted a divorce and had to change state religion for this end. Needless to say, Roman Catholicism is a strong force in Ireland and the Irish were largely unhappy with the new Protestantism. However, this was heightened much more by religious zealot and Lord Protector Oliver Cromwell, who needlessly slaughtered Catholics left and right — and even some in the centre. By the late 1700s, 80% of Irish land was owned by Protestants and all politics were dominated by the Protestants as well.

In 1780, the Whig government conceded Irish Parliamentary independence, with Westminster no longer having the power of veto over the Irish Chamber. Despite being able to be superseded by the Crown's veto, the House of Commons gave them some form of political initiative and more legislative independence. Grattan's Parliament2 lasted from 1782 - 1800, ending just after a famous rebellion led by Wolfe Tone and his Society of United Irishmen (SUI).

Truly united between class and religion, this group was reacting to the French Revolution, which saw a rise in reforms for commoners and the abolition of the aristocracy and monarchy. Despite being given the right to vote and hold military posts, Catholics still could not hold public office in Parliament, something which needed to be rectified. Concerned by the growing rebellious fervour, the British government arrested and transported people involved in the group, leaving the SUI in desperation. Hoping for French help, which came far too late, the SUI instigated uprisings in many parts of the country, but all were unsuccessful and the death toll on both sides is estimated to be 30,000.

Still, the influence of the SUI can be seen in the Irish nationalist colour, green (which was pioneered by them), as well as in the Irish country band, The Wolfe Tones, who have been making music, particularly of a nationalist nature, for the best part of 40 years. As will soon be discovered, the rebellion was more of a failure than anybody could imagine. But Irish nationalist mythology had a new hero and the cause was always there to be fought.

In response to the SUI Uprising, Parliament, led by Tory Pitt the Younger, drafted the 1800 Act of Union which nullified Grattan's Parliament and gave all legislative power back to Westminster, with a certain amount of Irish seats only open to Irish Protestants. Pitt desperately fought for Catholic emancipation, but George III called upon his coronation oath to 'protect the empire' in affirming his veto of that part of the Act. This led to Pitt's resignation. The Act of Union passed in 1800, but was enacted on 1 January, 1801 and was supposedly beneficial to both parties.

While fighting the Napoleonic Wars, Ireland's economy flourished under the new bonuses of free trade between the two islands. The textiles needed for army materials, crops for food and soldiers themselves were much in demand and Ireland could provide them all. This was reflected in the nationalist agenda, which only saw a small rising in 1803, led by SUI member Robert Emmet, that was of no significant importance. However, this only lasted as long as the wars continued, and in 1815 the economy slipped into a malaise. Only Ulster, which industrialised due to its close ties with Manchester, and the linen industry could combat British supremacy. The agrarian style of Irish economy paled in comparison with Britain's industrial revolution and scattered mini-famines did little to help things as Ireland's economy slumped and nationalist agitation began to start again.

Grattan's campaign for emancipation was short-lived in the early 1800s, but one man was not satisfied with taking the proverbial no for the proverbial answer. In 1811, this keen lawyer set up the Catholic Board in an attempt to raise awareness of his plight. By 1814, the board had been broken up by the government and as a constitutional3 nationalist he had little left to do.

However, moved by a growing religious tolerance on the part of British MPs4, O'Connell established the Catholic Association in 1823. It was principally the same as his last effort, but also strove for civil and political equality of all kinds. Also, the advertising of his campaign was aided greatly by Catholic Rent5, which used the Catholic clergy, a well-established institution, to collect a penny each month from its supporters. As well as raising funds of £20,000 in nine months, it reminded people of the problem and raised awareness within the British government. Parliament was almost forced to accept the bill as O'Connell stood for election in County Clare and won by a significant amount, but was banned from sitting in the Commons.

Catholic emancipation came in a sour form by 1829, forced by pressure from O'Connell as well as a possibility of law and order breakdown in Ireland. Yes, it gave Catholics full civil and political rights (save some of the highest posts, such as Prime Minister) but in return, and in an act of spite from Tory Home Secretary Robert Peel6, the act cut the Irish electorate to 1/6 its original size by raising franchise qualifications. Still, it was a success and saw Ireland's first nationalist success under the Union. On a side note, the passing of the act also saw the breakdown of the Tory party, before reforming as the Conservative party in 1832; and a great success for their opposers, the Whig party.

Catholic emancipation was felt across the country, except in the case of the peasantry, who saw no changes. Spurred on by the reform climate of the time, the peasants began to refuse paying their tithes7. The Anti-Tithe Campaign began in 1830 and helped bring Daniel O'Connell and his new political party, the uninventively-named O'Connellites, to an influential third-party status in Westminster. The Tithe War caused 242 murders, 300 attempted murders and 560 cases of arson in 1832 alone and the Whig government under Earl Grey tricked O'Connell into siding with them to pass the 1832 Great Reform Act, giving even more people the vote in mainland Britain. However, in the next year, O'Connell described them as 'the base, brutal and bloody Whigs' as they passed a one-year Coercion Act giving authorities wider powers for arrest and control in 1833.

The Whigs redeemed themselves somewhat with an 1832 Act introducing national schools to reduce religious sectarianism. It failed, but illiteracy was reduced. Also, an 1833 Church Of Ireland Act reduced the power of the Anglican Church in the House of Lords as well as unnecessary churches around the country — the sequestered money went towards secular purposes. This act caused 40 backbenchers, two cabinet ministers and the party leader, Earl Grey8, to leave the party. After this and a disastrously failed Union Repeal bill in 18349, O'Connell realised repeal was impossible and reform was his only chance. Since O'Connell had no real power unless he allied himself with a major party, and the Whigs had lost some power in their party due to resignations, the two came together under the Litchfield House Compact with the Radicals.

This was a highly successful time for O'Connell, who succeeded in passing many of his aims, what came to be known as the Drummond Reforms10. Many acts were passed through Parliament throughout the latter part of the 1830s and eventually the Tithe War was ended in 1838 with a Tithe Act. This transferred the responsibility of paying tithes from the Catholic peasantry to the Protestant landlord, meaning the peasantry were no longer paying tithes directly to a church they didn't support, and therefore solving the problem. The other reforms encouraged Catholics into positions of power and came down hard on Orange11 magistrates who turned a blind eye to Catholic harassment. In the end, though, O'Connell felt he had lost touch with his people and became disillusioned with Parliament. The 1834 Poor Law Act, a humiliating way of providing food and shelter for the needy, was an unpopular act which helped precipitate his nullification of the Compact in 1840 and made way for the plight of Repeal.

By 1840, O'Connell had moved on to the National Repeal Association (NRA) declaring that repeal was the only thing the Irish people would accept. However, O'Connell was ambiguous as to whether repeal meant a return to Home Rule, as with the pre-1800 Grattan's Parliament, or total independence from British rule. Needless to say, this made his cause somewhat questionable. Also, he held gatherings so big they became known as 'monster meetings' — but, as he gave his own estimations, it is very hard to believe that at their height the gatherings were attended by three to four million people, out of a total population of eight million12. The number was probably closer to 100,000.

Instead of Catholic Rent, the Liberator this time used Repeal Rent — it was largely the same but had less of an impact. This time religious leaders pressed him with issues like education, providing a less unified front than before. Even worse for O'Connell was a new nationalist group, the militant Young Ireland, who were a largely upper-middle-class group putting pressure on the Liberator to take different approaches to the cause. Combating this was a newly revived Conservative party, strong under the hand of Peel13 and not prepared to concede anything that might show weakness or divide the party again. Taking strong measures, the 1843 Banning of Clontarf Castle meant that O'Connell could not hold a meeting there. As he was not prepared to defy the law he had no options left, and nationalism was soon to be taken over by Young Ireland. But before that could happen, a great crop strife would occur that would become a benchmark for Irish history and change the form of the Anglo-Irish question for the coming years.

1Especially Northern Ireland.2Named after Henry Grattan, a prominent spokesman of the Irish cause.3Abiding by the laws of the country.4An emancipation bill was narrowly defeated around this time.5Ironically paid by Protestants too; don't judge this book by its cover.6Who, if any of you are wondering, is the reason policeman are nicknamed 'Bobbies' or the archaic 'Peelers'. He set up the London Metropolitan Police Force and Robert can be shortened to Bob, or Bobby.7A 10% tax paid to the Anglican Church, regardless of religious inclination.8Who, incidentally, is the fellow the tea is named after.9Only one British MP voted in favour of it.10After Dublin Under-Secretary Thomas Drummond.11Hardline Protestants, named after William of Orange.12Everywhere outside of the meeting must have been quiet that day.13O'Connell's greatest enemy, who had previously challenged him to a duel over the emancipation issue.