County Londonderry Content from the guide to life, the universe and everything 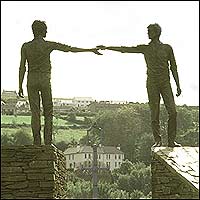 I was born in Londonderry
I was born in Derry City too:
Oh what a special child
To see such things and still to smile.
– Neil Hannon1 and The Divine Comedy, 'Sunrise'

The City of Derry/ Londonderry

Controversy besets even the name of this county and its main city: over time the city has been known as Calgach, Cholmcille, Daire, Doire, Londonderry and Derry. The shared element linking these names is the Irish word Daire or Doire, which refers to an ancient oak grove. The prefix London was added succeeding the Royal Charter of James I in 1613. Republicans refuse to acknowledge that British connection, and insist on calling it by its original name, Derry. Loyalists are adamant that the correct title is Londonderry. Even though the words of the Sash (the theme tune of Orangemen) include the line 'It was worn in Derry, Aughrim, Enniskillen and the Boyne'. And the rugby cry of the (mainly Protestant) boys grammar school was 'On Foyle, On Foyle, FCD2!' But then, logic doesn't often play a large part in Northern Ireland's history.

The city council is officially Derry City, Co Londonderry. Those who live there tend to use the name Derry as it is shorter. But when asked 'Where ye from, big lad?' to use one or other form could be interpreted as an indication of one's background. Hence it became common practice to refer to the city as 'Derry/Londonderry', which when read out on the radio or telly became 'Derry stroke Londonderry', and so the city is often jokingly referred to as 'Stroke City'. This appellation is credited to Gerry Anderson, a legendary local radio DJ.

The city itself can trace its beginnings to 546 AD, when St Columba founded a monastery by the banks of the river Foyle. Named after him, St Columba's Cathedral, built in 1633, is the oldest building in the city, and after the Reformation was the first Protestant cathedral built in Ireland or Britain. The Catholic cathedral, St Eugene's, was built in 1851, and towers above the Creggan district. Derry's residents3 today still tell you with pride that it was a city when Belfast was merely a town.

The city walls date back to 1618, and are remarkably well preserved. It is possible to make a full circuit of the approximate mile-long route on foot - a popular fund-raising event for local youth groups. Despite sieges in 1641, 1649 and the Great Siege of 1689, Derry's Walls were never breached - giving rise to the frequent epithet of 'The Maiden City'.

Four principal streets radiate from the central Diamond, and cross the walls at Bishops gate, Shipquay Gate, Butchers Gate and Ferryquay Gate. The Diamond is still a busy shopping precinct, and Austin's Department Store stands on one corner, one of the few remaining such stores still in existence. The Guildhall, facing Shipquay Gate, was built in a red-brick neo-Gothic style including vast and stunning stained glass windows, and is in daily use for ceremonies, festivals and the like.

Derry is the most westerly port in the United Kingdom, and was the scene of departure for many emigrants during the 1800s. In the 19th Century both ship-building and shirt manufacture gave the city its employment and money. During the Second World War the Lough was used as a base for naval vessels from the Allied forces. In the 20th Century, IT and chemical manufacturing firms provided major sources of employment, but in the latter half of the century Derry became famous for more sombre reasons: it was here on 5 October 1968 that a civil rights march met with violence, sparking 'the troubles' which continued for over 30 years. One of the most contentious incidents, Bloody Sunday, happened in Derry's Bogside district on 30 January, 1972, when British Troops opened fire on protesters, killing 13 (another died subsequently). The shocking events of that day have been the subject of a number of public inquiries (and indeed, moved U2 to write their song 'Sunday Bloody Sunday'). The murals and wall paintings4 that were created during those years are a lasting reminder of the pain and anguish suffered, although today they are relegated to being merely a tourist attraction.

The River Foyle is crossed by two bridges; the older one, Craigavon Bridge, was constructed in 1933, and is an unusual two-tier steel bridge, with road traffic permitted on both upper and lower decks. A newer crossing, the Foyle Bridge, was completed in October 1984, and has a graceful arch two miles long, making it Ireland's longest bridge. The river bisects the city into its predominantly Protestant Waterside, and Catholic City-side.

The unusual coat of arms (motto 'vita veritas victoria') features a skeleton. There are various theories as to its significance, including reference to the starvation that resulted during the Great Siege. It is not clear whether or not the very popular annual Halloween arts and music festival, which began in 1986, took its inspiration from the skeleton. Visitors flock to the city for this event, and for any future visitor, the Tower Museum is highly recommended.

Derry City football team play at the Brandywell on the predominantly Catholic Bogside of the city. They were forced to resign from the Irish league during the troubles but reformed and play in the Republic's League of Ireland which they have won several times along with the cup.

The Derry Journal is the second oldest newspaper still circulating in Ireland.

Flanked on the West by Lough Foyle, looking over towards Donegal5 in the Republic of Ireland, the coastline of this county sweeps past some magnificent beaches at Magilligan, Castlerock, and Portstewart. These latter two strands are bisected by the Barmouth, where the River Bann reaches the sea, and are also the location of some fine links golf courses. To the South is County Tyrone, and to the East, the river Bann forms the boundary with County Antrim. The county of Londonderry covers 2,070 square kilometres, has a total population of 213,000, and the average house price in 2005 was £117,000.

The Belfast-Londonderry railway line was opened in 1855, and had a profound influence on shaping the economy and social fabric of the county. Natural obstacles encountered as the track hugged the shore of the Atlantic Ocean around Binevenagh mountain were overcome in inventive ways, and the pair of railway tunnels at Downhill was a feat of engineering of their time. As the age of the railway faded, transport switched to roads, and the A6 (Glenshane Pass, where you can visit Northern Ireland's highest pub) was constructed across the Sperrin Mountains. Gold was discovered in them there hills in the 1980s, but has so far failed to make many millionaires. Today, it is possible to reach the county by air, using City of Derry airport.

Perched on the cliffs at Downhill are a pair of iconic buildings: the Mussenden Temple6, and the now ruined Downhill Castle. Both of these were constructed by the eccentric Frederick Hervey, Earl Bishop of Derry, described as 'one of the most flamboyant characters of the 18th Century'. The inscription around the dome of the temple, which is modelled on the Temple of Vesta at Tivoli, reads 'Tis pleasant, safely to behold from shore the rolling sea and hear the tempest roar'.

Coleraine is the county's second biggest town7 and is the main campus for Northern Ireland's second university, the University of Ulster. The town is a lively shopping mecca, and has a marina on the River Bann. The river used to be a more active port, even bringing coal ships up to unload in the town. It is much used as a base for tourists, given its proximity to many of the tourist attractions along the north coast. It forms the apex of an inverted triangle with the seaside resorts of Portstewart and Portrush (the latter in next door County Antrim) known imaginatively as 'the triangle area'. This is the location of one of Northern Ireland's biggest annual sporting events - the fiercely contested motor-cycle road race the North West 200.

Other large towns include Limavady8, home of Miss Jane Ross, who wrote The Londonderry Air (more commonly known as Danny Boy). Nature lovers flock to nearby Roe Valley Country Park, to enjoy a walk in the pleasant woodlands, or to take part in more active pursuits such as salmon fishing in the River Roe, canoeing, or rock climbing. Smaller market towns are Dungiven, which has the ruins of an old priory dating back to the 11th century, Maghera and Magherafelt, the location of Springhill, another National Trust property which is a fine 17th Century plantation house containing a significant costume collection.

As well as Neil Hannon, already mentioned above, the county has given the world many talented musicians, such as Feargal Sharkey, Eurovision Song Contest winner Dana, Phil Coulter, Nadine from Girls Aloud, and erm...the lead singer of D:ream9. A blue plaque in Derry commemorates Mrs Cecil Frances Alexander, writer of such hymns as 'All Things Bright and Beautiful', and 'Once in Royal David's City', whilst a statue commemorates Josef Locke, the tenor who was the subject of the film 'Hear My Song'. Elsewhere in the arts, actor James Nesbitt is from Coleraine, and novelist and playwright Jennifer Johnston, although born in Dublin in 1930, has made Derry her home since 1979. The city boasts not one but two Nobel Laureates: Poet and author Seamus Heaney won the prize for Literature in 1995, while the Peace prize-winning politician John Hume has lived in Derry all his life. Oh, and Amelia Earhart landed here in 1930, becoming the first woman to fly solo across the Atlantic.

1Neil's father, Brian, was a rector in the city for many years.2Foyle College Derry.3Population around 75,000.4Probably the most famous is the one that proclaims 'You are now entering Free Derry'.5Rather confusingly, the most northerly point on the island of Ireland is not in Northern Ireland, but is Malin Head, in County Donegal.6One of the main symbols used by the National Trust.7Population 57,000.8Population 13,000.9Perpetrators of 'U R the Best Thing' and Labour Party theme tune 'Things Can Only Get Better'.