County Fermanagh, Northern Ireland, UK Content from the guide to life, the universe and everything 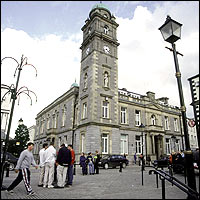 County Fermanagh1 is the most south-westerly of the six counties that make up the region of Northern Ireland. It is 1,691 km2 (652 miles2) and has a population of approximately 55,000, making it the most sparsely populated of the six northern counties. The average price of a house in September 2005 in the county was £131,467.

It forms part of the Fermanagh and South Tyrone UK Parliamentary Constituency and the current Member of Parliament is Michelle Gildernew of Sinn Féin. It is in this constituency that the IRA hunger striker Bobby Sands won a 1981 by-election.

It is bordered to the north-west by County Tyrone and to the south and west by the Republic of Ireland counties of Monaghan, Cavan, Leitrim and Donegal. The main geographical feature of the county is Lough Erne.

The county town is Enniskillen2 - with a population of around 15,000, it is also the administrative and commercial centre of the county.

Most of Fermanagh is rural farmland, but other main towns include Belleek3, Irvinestown and Maguiresbridge.

The area of Fermanagh was first settled around 6,500 years ago. The area was subject to Viking raids in the 10th and 11th Centuries and later Norman invasion in the 12th Century. This period, as well as the Plantation of Ulster, was recorded in the Annals of Ulster. The Annals of Ulster were written by 16th Century monks including Ruaidhri Ó Luinín, on Belle Isle in Lough Erne. Two versions of the book remain; the original, which is housed in Trinity College Dublin, and a later copy in Oxford University's Bodleian Library.

The county has a strong military tradition. The Royal Inniskilling Dragoons Guards and The Royal Inniskilling Fusiliers were originally formed in 1689 during the Williamite Wars. They have since seen active service in the American War of Independence, the Boer War, World War I and World War II. In 1968 the Inniskilling Fusiliers were merged with two other infantry regiments to form the Royal Irish Rangers, which later became the current Royal Irish Regiment. In 1992 the Inniskilling Dragoons Guards were merged with other cavalry regiments to form The Royal Dragoon Guards, which is now a Challenger tank regiment based in Germany.

The county's darkest day came on Remembrance Day in November 1987. As local people gathered in Enniskillen to remember those killed in the world wars, an IRA bomb exploded, killing 11 people and injuring a further 62. The father of one victim, Gordon Wilson, went on to become a leading peace campaigner. Playing with U2 that evening, the Dublin-born singer Bono famously stated before their performance of 'Sunday Bloody Sunday':

Fermanagh is home to one of Northern Ireland's major waterways, Lough Erne. Separated into two sections – Upper and Lower Lough Erne, which are connected by the River Erne – it stretches for 70 miles and is one of the region's most popular tourist attractions. Between 1992 and 1994 the lough was linked to the River Shannon in the Republic of Ireland, creating a navigable waterway of over 300 miles. The canal between the Shannon and Lough Erne, which is somewhat lower, has 16 locks to allow passage.

Situated on Devenish Island in the Lower Lough is a well-preserved 12th Century round tower. Considered one of most important monastic sites in Ireland, the island is also the site of a now ruined church founded by St Molaise. The original purpose of the tower was to provide the monks a safe refuge when threatened. This occurred quite frequently as churches in Fermanagh were often the target of Viking raids.

Situated close to the village of Derrygonnelly is Lough Navar Forest Park. Managed by The Department of Agriculture and Rural Development's Forest Service, the main attraction of the park is a seven mile scenic drive through forests of conifers. This leads to Magho Viewpoint, which offers panoramic views 1000 feet above Lough Erne. On a clear day the Sperrin Mountains are visible to the east, with Donegal Bay and the Atlantic Ocean to the west.

Dating from the 15th Century, the castle was built by the Maguire family who ruled the area at the time. Located at a defensive position on the River Erne, the castle originally consisted of a square tower house. Around 1611, The Watergate was built by Sir William Cole, who was the provost of the newly chartered town. It is this part of the castle that is most recognisable today and features twin turrets, a parapet and wall walk.

Situated 12 miles to the west of Enniskillen are the Marble Arch Caves. Awarded UNESCO Global Geopark status in 2004, the caves are accessible to all and feature calcite-coated walls, stalactites and underground rivers. Located at Florence Court and forming part of the Cuilcagh Mountain Park, they are considered to be some of the finest showcaves in Europe.

Florence Court is one of Northern Ireland's most important and celebrated 18th Century houses. The original parts of the house were built around the middle of the 18th Century by the first Lord Mount Florence, John Cole5. His son William Cole, later to become the first Earl of Enniskillen, expanded the house in 1770, adding the wings and pavilion. The house is known for its striking plasterwork, baroque exterior, original collection of furniture and the famous Florence Court Yew. Discovered in the area around 1770, this was the first known yew tree with upright branches, and the ancestor of all the graveyard yew trees so familiar in the UK and Ireland. Now owned by the National Trust, the house is open to the public and is a popular wedding venue.

Famous People from Fermanagh and Trivia

Writer and actor Adrian Dunbar was born in Enniskillen. Dunbar is best known for his roles in My Left Foot and The Crying Game. He originally played the part of Princess Leia's adopted father in Star Wars Episode I: The Phantom Menace. The scene was cut and the character was then subsequently played by Jimmy Smits in the second two prequels.

Another actor from Enniskillen is Ciarán McMenamin, who starred in the feature film, To End All Wars, and various other television dramas.

Bill Clinton, the former President of the United States, has roots in Fermanagh. His mother's maiden name was Cassidy, which along with Maguire is a common name in the area. During a 1995 visit Clinton visited his ancestral home, a Cassidy farm in the village of Roslea.