County Armagh, Northern Ireland, UK Content from the guide to life, the universe and everything 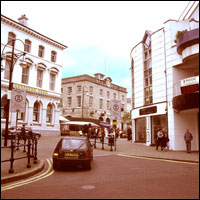 It's my old Irish home
Far across the foam
Although I've often left it, in foreign lands to roam
No matter where I wander through cities near or far
Sure me heart's at home in old Ireland (Where?)
In the county of Armagh

- The Boys From County Armagh

Armagh forms part of the UK Parliamentary Constituencies of Newry and Armagh and Upper Bann. The current Member of Parliament for Newry and Armagh is Conor Murphy of Sinn Féin. Upper Bann, which covers the areas around Craigavon and Banbridge, is represented by David Simpson of the Democratic Unionist Party. Simpson dramatically won the seat in the 2005 General Election by beating the then Ulster Unionist Party leader and Nobel Peace Prize winner David Trimble.

It is bordered by Lough Neagh to the north, County Down to the east, County Tyrone to the west and the Republic of Ireland counties of Louth and Monaghan to the south.

Armagh is known as the 'Orchard County', and is famous for its Bramley apples.

The capital of the county is also called Armagh. Armagh City is the ecclesiastical capital of all Ireland, with both the principal Roman Catholic and Protestant cathedrals being located here.

Armagh was awarded city status by Royal Decree in 1996 and has a population of approximately 54,000. The small city centre surrounds Market Square and the main streets are called English Street, Irish Street and Scotch Street. These three streets roughly mark out the 'Trians'2 of the city.

Craigavon was created as a 'new city' in the mid-1960s to relieve over crowding in Belfast. Sited between Lurgan3 and Portadown, the intention was that Craigavon would encapsulate the two towns and become one of the largest conurbations in Northern Ireland. Poor planning and reduced investment due to the outbreak of the Troubles resulted in only half of the intended building work being completed. Some of the poorer housing had to be demolished after becoming derelict. The term Craigavon still exists, but most locals still use the town names of Portadown and Lurgan and see Craigavon as little more than a few government buildings, roundabouts and housing estates.

Other towns in the county include, Crossmaglen, Poyntz Pass, Tandragee and Loughgall.

One of the oldest inhabited sites on the island of Ireland, Armagh has a rich and famous history.

The ancient kings of Ulster ruled from Navan Fort, then known as Emain Macha, as early as 700 BC. The 240m diameter mound is best viewed from above. It is steeped in Irish mythology and tales of King Conchobor mac Nessa, The Red Branch Knights, and the warrior Cuchulainn. Recent research has found that the temple on top of the mound was destroyed in around 95 AD, possibly during conflict between local bronze age tribesmen and the invading Celts. It is acknowledged as the principal archaeological site in the province of Ulster and was protected following a public inquiry into quarrying in the area in 1985.

Calling it 'My sweet hill', St Patrick founded his first church in 444 AD on Armagh on a site now occupied by the Anglican cathedral. Armagh then became a centre of religion and learning, with scholars being attracted to the new colleges and churches. High King Brian Boru4 is said to have driven Norsemen from the area in 1014. For these reasons Ireland, and Armagh in particular, is seen to have preserved Christianity throughout the Dark Ages, and hence gained the name 'Isle of Saints and Scholars'.

Many of Patrick's teachings are contained in the Book of Armagh. Known as the Liber Ardmachanus in Latin, or sometimes as the Canon of Patrick, the book was written primarily in 807 AD and added to over the next two centuries. Parts of the book are said to be written by Patrick himself, but the majority is credited to a scribe called Ferdomnach of Armagh. The sections of the book written in Irish are the oldest known examples of continuous Irish text known to exist. Richly bound and very well preserved, the book is currently in the possession of Trinity College, Dublin.

Armagh was one of the first areas settled by the mainly Protestant landowners that came from Scotland and England during the 17th century. This period was called the Plantation of Ulster. Starting with the area being shired as a county in 1586, the native Catholic landowners were forcibly removed from their land. The land was then divided up between the Anglican Church and the newly arrived planters.

South Armagh became infamous during the Troubles, particularly during the 1970s and 1980s. The area was a rich recruiting ground for the IRA and was known as 'bandit country'. The risk of sniper and bomb attacks meant that the police and army only patrolled in numbers and maintained a series of fortified lookout posts. These now largely redundant posts are in the process of being dismantled, restoring the county's picturesque landscape to its former state. Loyalism was also rife in the county with Billy Wright's Mid-Ulster brigade of the Loyalist Volunteer Force terrorising Catholic residents in Portadown. Nicknamed 'King Rat', Wright was assassinated in the Maze prison5 in 1997.

Another flash point in the county is the annual July Orange Order6 parade from Drumcree Church to the nearby town centre of Portadown. On the return leg of their march, the Orangemen have traditionally walked the Garvaghy Road, accompanied by flute bands. In 1995, the Catholic residents of the area objected to the march and were forcibly removed from blocking the route by the police and army. This caused widespread civil unrest across Northern Ireland, particularly in Republican areas, which was repeated over the next two years. In 1998 the newly formed Parades Commission7 banned the parade from passing down the Garvaghy Road, which again caused equally widespread rioting, this time in Loyalist areas. The parade remains banned, with both sides unwilling to back down - the Orangemen citing their right to walk the Queen's highway, and the Garvaghy Road residents unwilling to permit a triumphalist parade to pass their homes. However in recent years the level of unrest has decreased significantly.

Gosford Forest Park is a 240 hectare area of park and woodland, close to the town of Markethill. Located in the park is Gosford Castle. Completed in the mid-19th century, the castle was the seat of the Earl of Gosford and was designed by the architect Thomas Hopper in a Norman style. Since the Gosford family sold the property in 1921 it was been used as a World War II prisoner of war camp and as an army barracks. Constructed from Mullaghglass granite, Gosford is one of the largest and most original castles built in the 19th century, boasting 197 rooms.

The National Trust has three properties in the county, Ardress House, the Argory and Derrymore House. Ardress House, the most notable, is a 17th century plantation house which was remodelled in the Georgian period. It is known for its ornate interior and plasterwork, as well as its collection of paintings.

The Armagh Observatory was founded in 1790 by Archbishop Richard Robinson. It is the oldest scientific establishment in Northern Ireland, and the second oldest observatory in Ireland. Bucking the trend of previous buildings, the Armagh Observatory was constructed to best suit its function, rather than for architectural beauty. The noted astrophysicist Professor Ernst Julius Öpik8 worked at the Observatory from 1948 until 1981. With the space race increasing interest in astronomy in the 1960s, the Observatory found it could not cope with the level of visitors. The result was the construction of the adjacent Armagh Planetarium. The Planetarium has many attractions including a 16" reflecting telescope, a Mars GOTO projector and themed walkways through the grounds. The Observatory continues its work as a prestigious scientific establishment today, under the current director Professor Mark Bailey.

Jonathan Swift often spent summers in Armagh. A 275 year old original printing of Gulliver's Travels with notes by the author remains in Armagh Public Library. The St Patrick's Trian Visitor Complex on English Street has a permanent 'Land of Lilliput' interactive exhibition about the book and its author.

Paul Muldoon is a poet from the county. After working as a producer for the BBC in Belfast, Muldoon moved to America. His appointments have included Professor of Humanities at the Ivy league Princeton University, and Professor of Poetry at Oxford University.

The sport of Road Bowls has its roots in Armagh. There are various stories as to how the game came to be, but the present form was first played in the county during the 17th century. Until the sport's governing body, Bol Chumann na hEireann, was formed in 1954 rules varied from location to location, but today the game is played with a 6cm cast iron bowl. The object of the game is to cover the designated course, usually a country lane or road, with the least number of underarm throws. The only other county where the game is played widely is Cork in the Republic of Ireland. The two counties enjoy a healthy rivalry and compete in club competitions, as well as in an all-Ireland series. The game has reportedly spread to Europe and America, being particularly popular in West Virginia.

Gaelic Football is a popular sport in the county. Despite only having appeared in four All Ireland finals, Armagh are currently considered one of the top three teams. The only time they have lifted the Sam Maguire Cup9 was a famous victory over their neighbours Tyrone in 2002. At club level the county's most successful team are Crossmaglen Rangers. The club has won the All Ireland Championship on three recent occasions - 1997, 1999 and 2000. Famous players from Armagh include Oisin McConville, Kieran McGeeney and Steven McDonnell.

1Contae Ard Mhacha in Irish.2A term for the ancient divisions of the city.3There is a well known local saying 'a face like a Lurgan spade', which means to be downcast or sulking.4Who is buried in the Anglican Cathedral's churchyard.5Formerly known as Long Kesh.6A Protestant organisation formed in the 18th century to commemorate the 1690 victory of William of Orange over the Catholic King James II.7A body formed to adjudicate on contentious parades.8Grandfather of Liberal Democrat MP Lembit Öpik.9The trophy awarded to the All Ireland victors.