County Antrim, Northern Ireland Content from the guide to life, the universe and everything 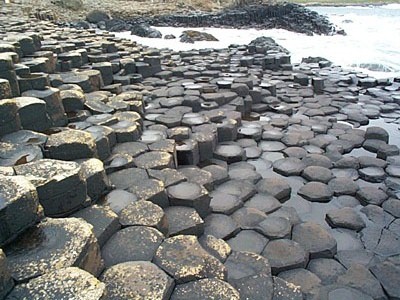 Antrim is the most north-eastern county in Ireland, and the second largest by population after Dublin. On the north and east it is bounded by the Irish Sea and the Atlantic. To the south, the River Lagan separates it from County Down. On the south-west border lies Lough Neagh, the largest lake in the British Isles. North of the Lough, the River Bann divides Antrim from Derry.

In 2011, the average cost of a house in the county was £120,933, and the MPs for the county1 were Ian Paisley Junior (North Antrim), Sammy Wilson (East Antrim) and William McCrea (South Antrim) - all of the DUP.

Antrim Town, while holding the county name, is not the biggest or most important town in the county. Belfast is the only city in County Antrim. It's situated in the south2, the most heavily populated part. Other towns include Carrickfergus and Larne on the east coast, Ballymena in the centre and Ballycastle on the north coast. Off the coast of Ballycastle lies the biggest island off Antrim's shores, Rathlin. It was in a cave on this island - according to legend - that Robert the Bruce famously sat and watched a spider building a web, and drew a lesson about persistence from it.

The first people came to Ireland in about 8000 BC, soon after the melting of the ice sheet which had almost completely covered the country. The first people to inhabit Ireland were called Mesolithic or Middle Stone Age. They were hunter gatherers, nomadic people who used flint spearheads, arrowheads and knives to hunt, kill and skin animals. Remains of these people are particularly common in Antrim, perhaps because flint is very common there.

In about 4000BC, farming was introduced to Ireland, and many other innovations occurred as well, suggesting the arrival of a new race of people. These Neolithic or New Stone Age people lived in one place in settled communities, and bred animals and raised crops in clearings in the primeval forest. They had a better type of tool, the porcellanite polished stone axe, which was used for cutting down trees and many other tasks. The main source of the porcellanite, a hard, easily-polished black stone, was a quarry at Tievebulliagh, County Antrim. Axes made from stone from this quarry have been found as far away as London and Shetland.

It's not known for sure when the county was first formed, but a division of land called Antrim has been traced back as far as the 1300s.

The land has been settled and resettled by various groups of people, including the Celts, the Vikings, and the later plantations of Scottish and English settlers. Many of these peoples left their mark and the remains of cairns, forts and towers can be found all over the county.

About ten miles to the east of Ballymena lies Mount Slemish. According to legend, St Patrick was kept on the hill as a slave, tending sheep and pigs, before he got involved in the preaching he's more famous for.

A lot of big events in history have happened in Antrim. In June 1690, William of Orange landed at Carrickfergus to take charge of the Williamite forces fighting against James II for the crown of England, Scotland and Ireland.

In the 1790s, Antrim became a centre of radicalism and an important part of the United Irish rebellion in 1798. On 7 June 1798, the Battle of Antrim took place in Antrim town. The defeat of the rebels here - who had briefly controlled most of the county - marked the beginning of the end of the rebellion.

Geologically, Antrim is one of the most interesting counties in Ireland. It is built on a gigantic basalt plain, formed from a 'basalt flood' 60 million years ago - a process where the earth's crust separates and all the magma below flows out through the cracks, solidifying eventually into basalt rock.

When the flood happened, it covered all the older rocks - encasing them in a type of hard, tough packaging material that kept them safe from erosion in the intervening years. Underneath, Antrim is a relatively unbroken historical record going back to very old times indeed. Not so the rest of the country: erosion and weathering has denuded most of Ireland, so that the surface rocks are 300 million years old and older in most places.

Right on the coast of North Antrim, the Giant's Causeway is probably Northern Ireland's most famous landmark. A series of basalt columns stretching into the sea, its name comes from the legend that it was built by the giant Finn MacCool as a bridge to Scotland. Geologists, however, think it's more likely to have been the result of a lava flow 50 - 60 million years ago, which formed distinct columns as it cooled.

In 1986, UNESCO declared the Giant's Causeway a World Heritage Site3, ranking it alongside spectacular sites like the Taj Mahal and the Great Barrier Reef.

Apart from the Giant's Causeway there are quite a lot of scenic views and tourist attractions in the county.

1Belfast not included2In fact, parts of south and east Belfast are actually in County Down.3 The only one in Northern Ireland4So maybe we're due another anytime now...