Dunluce Castle, County Antrim, Northern Ireland Content from the guide to life, the universe and everything 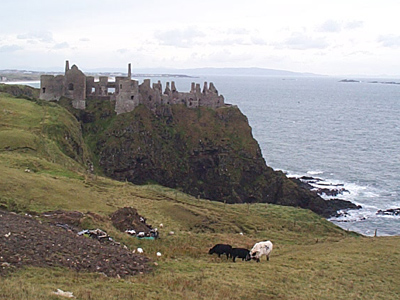 The coast of Antrim in Northern Ireland is a rocky, rugged and desolate place and on one of the stacks that juts into the Atlantic on the Causeway coast stand the ruins of Dunluce Castle.

Built in the 16th Century for the MacDonnell family (although the outer walls are said to have been built for the MacQuillans in the 14th Century), the Castle was initially accessible by a drawbridge. Now you'll find a permanent structure that takes you to the Scottish-style gatehouse on the outcrop. This is actually on top of a cave which was once used as an underground harbour. There is a path leading down to the harbour so you can have a peek, but be careful if the sea is rough. Guest apartments and stables were built on the mainland, and the ruined outer walls of these are still in place today.

The principal part of the castle consists of the two-storey structure of the main hall with towers at the southeast and northeast corners. However, the flooring for the second storey is gone from all but the northeast tower. The Great Hall, though, clearly shows features from the upper level. Also, a walled kitchen garden to the north of the outcrop still exists.

The main hall has two great fireplaces and was modernised with a series of bay windows to the western Side.

The southeast tower features firing positions for archers both over towards the bridge and to cover the track up from the harbour below. The northeast tower has a trap door which allowed for a quick escape, should it be required, down to the harbour.

The walled kitchen garden had always hung precariously on the northern side, and was subject to the worst ravages of the north wind and sea. In 1639, part of this complex was swept away into the sea during dinner, killing a number of the staff. From that time, Dunluce has remained uninhabited as the MacDonnell family took up a more secure residence on the mainland.

The Castle is a National Trust property and is open all year round with the exception of Christmas Day and New Year's Day. At the time of writing, admission costs £1.50 for adults. There is no tour guide at the site but all sections of the Castle are well described on plaques in the relevant areas. There is a gift shop with plenty of souvenirs and a very friendly staff who will be able to answer any queries you may have.

If you do visit Dunluce, don't forget to travel to The Giant's Causeway just four miles along the coast. A little further along, near Ballycastle, the really daring can try the Carrick-a-Rede rope bridge.