The Art of the Martini Content from the guide to life, the universe and everything 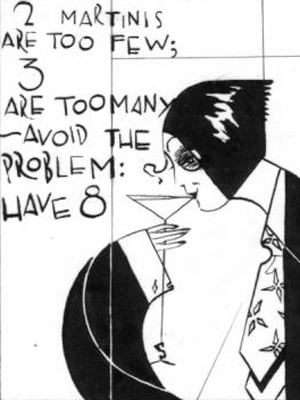 The Martini is often mixed, rarely perfected, and always argued about. One of the oldest quips about the Martini is that you can have a very good drink with vodka and vermouth, but it isn't a Martini. The classic Martini is, simply put, gin and dry vermouth, or basically cold alcohol with style. Yet with all that is known about what constitutes a Martini, unique and refreshing Martini recipes continue to surface almost daily. The ingredients and the way to mix them are forever argued about, leading to the classic bartender joke:

Two adventurers were packing for a safari and one of them was packing a pint of gin and a pint of vermouth. When the other adventurer asked why, the first replied, 'In case we get lost I'll mix a Martini, someone will show up to argue that I did it wrong, and then we're saved!'

Wherever you get a Martini, it will be mixed differently, with the ingredients and proportions changing according to either your personal taste or that of the bartender, although there are some standard terms that are worth knowing. The first of these relates to the vermouth, and the quantity of it.

There are two common types of vermouth, sweet and dry. A sweet Martini uses sweet vermouth with its spirit.

As the name suggests, this type of Martini uses a dry vermouth.

One of the lesser ingredients that is considered essential to a Martini (and to a Gargleblaster) is an olive, and a Dirty Martini emphasises this by adding a small amount of the brine from the olive jar to the top of the poured Martini.

The second set of terminology you'll come across relates to the ingredients themselves, and comes down to Vodka or Gin. Vodka Martini is primarily vodka with vermouth, but depending on who mixes it, it may also contain some gin. Likewise a Gin or plain Martini is primarily gin with vermouth, but may also contain some vodka. The exact amount of vodka and gin in each of these two styles varies dramatically depending on the named recipe, who mixes it and how much their elbow slips.

There is and always will be a lot of debate, ingredients aside, about how to mix the perfect Martini. Should it be shaken, or stirred? Garnished, chilled, iced, and pretty much anything else an adventurous bartender may try. Taste is personal, so rather than dictate we shall try to educate about the different methods that can be employed, starting with the two most contentious.

When you shake a cocktail the ingredients get mixed harshly. This has the plus side that the spirits are blended together very well, but it also has the downside that any delicate flavours in them can be 'bruised' and lose some of their character.

When stirred, the flavours of the individual ingredients remain but can be detected separately by a discerning palate.

The easiest and most common way of chilling a Martini is to add ice cubes when mixing it. When a spirit is chilled, the 'edge' is removed from it. Taking the sharp edge from spirits makes them easier to drink, and therefore more palatable. An additional side to this is that as the ice melts, water is blended in with the spirits to dilute the Martini. Some people prefer this as a pure-spirit Martini can be a bit overpowering. If you are going to use ice, do make sure to remember that the water it was made from will become part of your cocktail.

As with all food, and therefore also with drink, adding a garnish can drastically change the taste. The classic garnish for a Martini is an olive, but a pickled silver-skin (cocktail) onion and occasionally a maraschino cherry are also added. Additionally lemon rind is considered a classic garnish and adds a slight citrus edge to the spirit.

Regardless of what people may tell you, the best Martini is the one you enjoy the most, so experiment with different recipes and see what you like best. To help you with this, here are some of the more common ones that you'll find:

The above Martinis will pass inspection in any bar you chose, but some will yearn to imbibe a more adventurous libation where the only resemblance to a Martini is the gin, or vodka, and vermouth. Remember that no Martini is complete without the vermouth. Have faith in the vermouth – your friends (or customers) will thank you.

Optionally garnish with a dash of cayenne pepper (or a fresh chilli pepper, for the brave).

Optionally garnish with shaved dark or white chocolate depending on your mood.

Best garnished with the onions.

Garnish the cocktail glass first by wetting the rim with a lemon slice and coating it in powdered sugar, placing the lemon slice on the rim. Combine in shaker over cracked ice, stir and strain into prepared cocktail glass.

Garnish with frozen raspberries in bottom of cocktail glass.

Garnish with a pineapple spear.

This is by no means a complete list of possible Martinis to be made and enjoyed. It is more of an introduction to the wonderful world of the Martini, and the joy that it can bring to everybody, regardless of taste. By all means, experiment and enjoy! Life with a Martini is life the way it should be! Always remember, no Martini is ever made twice, no matter how exactly you measure, so each one represents a unique and beautiful experience to be savoured!

1This comes from the last verse of Tom Lehrer's song 'Bright College Days':

2The vanilla flavour in the vodka will accentuate the chocolate in the Martini, bringing a smooth, milky, texture to a clear Martini. This trick was learned in the perfecting of the art of hot chocolate, which requires a touch of vanilla to bring out the flavour of the baker's cocoa.3Do not be tempted to use gin, it really doesn't work.4This drink was originally named after a beautiful double-agent Mr Bond loved. Also, the recipe later changed to all-vodka at the request of sponsor Smirnoff – included is the original.