Uno - a Popular Card Game Content from the guide to life, the universe and everything 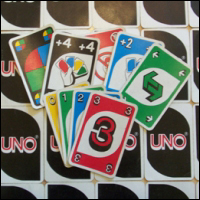 Uno is a card game1 that was invented in 1971 by Ohio barber Merle Robbins. Merle came up with the idea as a game to play with his family and friends, and it became so popular with them that eventually they pooled some funds to have game sets produced for sale. An initial investment of $8,000 was enough to make 5,000 games, which Merle sold in his barber shop and through a few other local shops.

Eventually he sold the rights to the game to a friend who created International Games Inc through which to market it. In 1992 International Games became part of the Mattel toy manufacturing company2, and today Uno is one of the most popular card games in the world.

How to Play the Game

After the deck is shuffled, each player is dealt seven cards. The remaining deck is placed face down and creates the draw pile. The top card is turned up next to the draw pile to create the discard pile. Beginning to the dealer's left, players place cards on the discard pile by playing cards that match the colour, number or action displayed on the top card. If a player doesn't have a card that can be played, that player must draw a card from the draw pile; that card may be played if it is eligible, otherwise play progresses to the next player.

The object of the game is to be the first to play all your cards. When a player has only one card remaining in hand they must yell 'Uno!' to alert the other players that drastic measures (draw cards, changing colours) are called for to prevent the end of the hand. If a player is caught not saying 'Uno' prior to the beginning of the next player's turn, that player must draw two penalty cards - leaving them with tres instead of uno5.

When one player discards their last card the hand is ended and points are counted. Depending on whether you prefer a short game or a long one, points can be awarded in one of two ways:

Variations on a Theme

Uno can be a very exciting and fast-paced game when playing by the rules, but for a bit of fun the rules can be amended to provide more of a challenge. There are dozens of unofficial rules that can be used independently or in combination, for instance:

Variety is the Spice of Life

Not to be outdone by unofficial 'special rules' and, of course, capitalising on cross-marketing opportunities, Mattel has issued many special edition card games that feature popular characters or special themes. There are several 'My First Uno' decks for younger children that feature Winnie-the-Pooh, Hello Kitty, Dora the Explorer and Sesame Street to name a few. For the older crowd there are decks featuring professional sports teams, Family Guy, Spider-Man, the Simpsons, NASCAR or professional wrestling among others. Some special decks simply feature the characters or people from their given theme, others include special rules.

If cartoon characters seem a little too juvenile for you and sports aren't your thing, you can still find an Uno variety to suit you.

1Similar to the German game Mau Mau which can be played with a deck of standard playing cards.2Mattel produces toy staples like Barbie dolls and Hot Wheels cars.3Older decks have words on the action cards, newer decks only have symbols so they can be marketed in non-English-speaking countries.4By the rules, a Draw Four may only be played if the player cannot match the colour in play. A Draw Four may be challenged and, if the player is found to have a matching colour card they draw penalty cards. If the challenge is upheld though, the challenger must draw two penalty cards in addition to the original four.5Uno is Spanish for 'one'. Tres would then be Spanish for 'three'.6Uno Attack in the US.